Andy Hobbs, then chief of Transit Police, was helping control crowds after the Canucks lost Game 7 to the Boston Bruins
Jun 15, 2021 10:33 AM By: Maria Rantanen 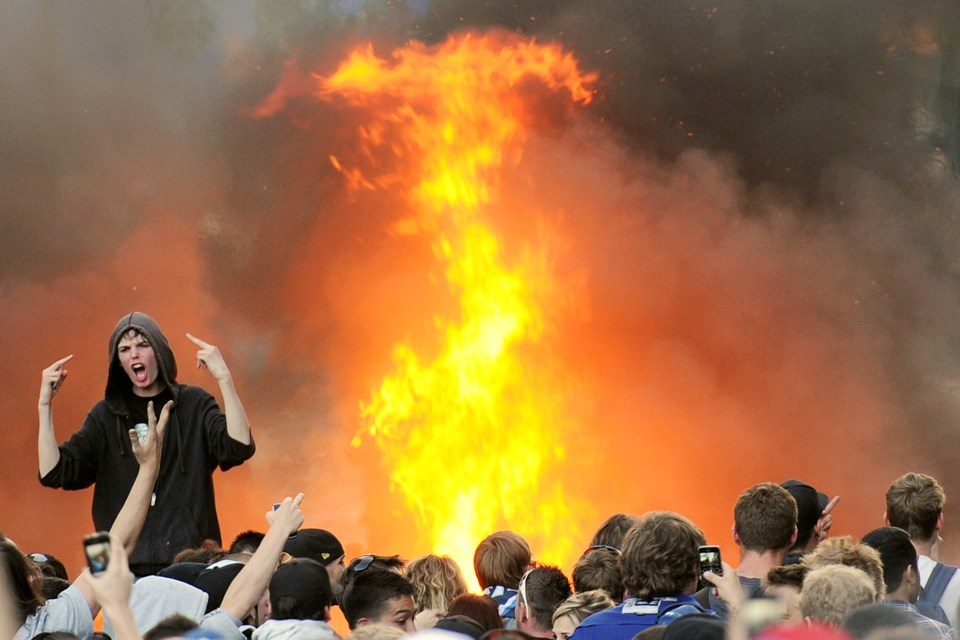 A riot broke out on June 15, 2011 after the Canucks lost their bid for the Stanley Cup.Dan Toelgoet/Glacier Media

Hobbs, who is currently a Richmond city councillor as well as a retired police superintendent, recalled the night of the 2011 Stanley Cup riot – that took place 10 years ago on June 15 – as “a pretty surreal night.”

“It’s one of those things you don’t forget,” Hobbs said.

Hobbs was walking east along Georgia Street while people were streaming west past him.

The game had just ended and the crowd on Georgia Street seemed pleasant enough, Hobbs recalled.

But then reports started coming in that something was going down a few blocks away at the main branch of the Vancouver Public Library.

Hobbs turned onto Seymour Street where he could see people walking shoulder to shoulder.

Then it started. Someone was climbing a lamp post. Another person smashed the windows of the 7/11.

And Hobbs saw people walking on top of the three-storey-high walkway - linking the Bay and its parkade - as well as smoke billowing off the roof, which turned out to be a car on fire.

More reports of violence were coming in on his radio from around the downtown core.

“(There was) still a little bit of disbelief on my part because I thought people in Vancouver had probably matured a little from the riot in ’94,” Hobbs said. “But I was wrong.”

As things were turning violent, Hobbs went over to help a constable who was trying to arrest a man smashing property. In the middle of trying to hold the suspect with one arm, a middle-aged woman tapped him on the shoulder and asked directions to the transit station.

As he held the suspect with his left arm, he pointed with his free arm toward the T-sign indicating the transit station.

“Thank you very much,” was the reply. “You have a lovely evening.”

As the night progressed, many people had left the downtown area, leaving behind those who were bent on causing havoc as well as some lookie-loos and bystanders.

There were 15 police officers trying to get about a 1,000 people under control, with steel beams, bricks and metal posts being hurled at them. An overturned van was burning in the middle of the street.

Hobbs had no crowd control equipment that night – he was just wearing black dress loafers, and he had no helmet or gas mask.

A police officer next to him was bleeding from being hit on the head but he continued to direct the mob.

“The crowd was very aggressive and violent,” Hobbs said.

Soon the VPD mounted police showed up to help control the crowd on Granville, but the looting and vandalism continued well into the night throughout the downtown core.

For Hobbs, his initial disbelief at the beginning of the night of the riot turned to disappointment the next day in those fans – although just a minority of the crowd – that turned to violence and caused chaos of destruction of private and public property.

“(There is a) thin veneer of society that sometimes is all that stands between anarchy or rioters and civil society,” Hobbs said, adding “that’s why we all have to be vigilant (in) whatever role we have.”

It’s a reminder, however, Hobbs told the Richmond News, that there are people who have no regards for others and will hurt others.

“There are a few of those people in society that we all have to be careful about,” Hobbs said. “And a riot lets them loose and they can hide in the crowd and have anonymity.”

The big lessons learned from the 2011 riot are the need for planning and crowd control by those organizing events, Hobbs said.

But he also sees a role for everyone in society to stop and say something when confronted with uncivil behaviour.

Paraphrasing Australian Lieutenant-General David Morrison, Hobbs said “Behaviour you walk by is the behaviour you accept.”

At the time of the Stanley Cup riot, Hobbs was the interim chief of Transit Police, having moved over from his position as a superintendent with the Vancouver Police Department.