Coun. Michael Wolfe is concerned about debris falling from industry into the river.
Dec 24, 2020 7:00 AM By: Alan Campbell 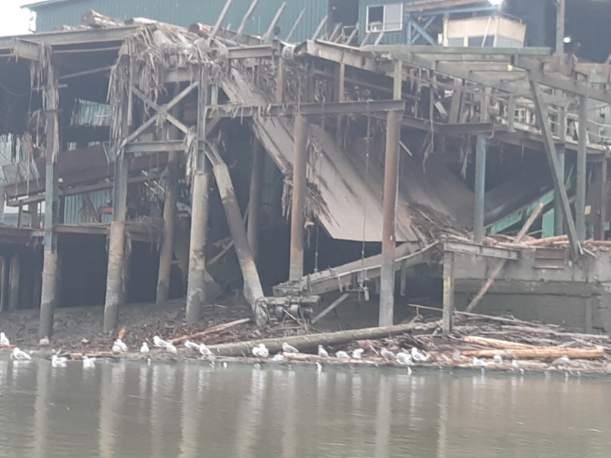 Many structures from Mitchell Island industry are falling into the Fraser River.Michael Wolfe photo

One of Richmond’s “greenest” city councillors has praised a recent environmental program to protect Mitchell Island – but warned there is a long way still to go.

The program identifies ways to protect and maintain the environment on the island, which is on the ecologically sensitive Fraser River estuary and is also one of Metro Vancouver’s major industrial hubs.

However, on a few recent trips to the area, Wolfe was concerned by a few things he witnessed, such as industrial debris either on the island’s banks or getting close to it.

“From the water’s edge, there seems to be little consideration from the industrial estate for the trees that are on the bank there,” Wolfe told the Richmond News.

“It’s not fenced off and the industrial use is spilling between the trees with debris that is not coming via the natural flow of the river.

“Some of the structures look like they need retaining walls replaced and are tipping towards the water, along with broken docks.”

Wolfe added that stormwater from the many industries on the island, with all the potential contaminants, is flowing straight into the river.

“We’ve received recent letters to mayor and council from people working there about the contaminants in the workplaces,” said Wolfe.

“I’ve brought this to the attention of some city managers and they’re looking at it.

“Getting the stormwater infrastructure there is imperative. A lot of the goals of the (stewardship) initiative are to protect and maintain the island, but it needs to be on and off it, including the surrounding area and the outflows.”

Wolfe said there needs to be a Metro Vancouver air quality monitoring station on the island, along with a “hard cap” around the industrial uses.

“We need a full perimeter assessment and maybe create a map with zones for protection,” he said.

“There may be areas that are not even getting used; we could create mud flats especially for wildlife.”

Richmond city council endorsed the Mitchell Island Stormwater Infrastructure Feasibility Study in 2020 to identify opportunities to improve the island’s stormwater system, given the risk that potential spills or accidents pose to the Fraser River ecosystem.

The main focus of the study is to develop source control and engineered solutions for managing stormwater.

The study also includes education and enforcement of businesses in the area with the goal of creating sustainable green infrastructure recommendations that improve water and air quality, flood protection, and provide habitat for local wildlife.

When completed, the city will determine the best methods to implement the recommended projects.