Richmond could be shaking all over 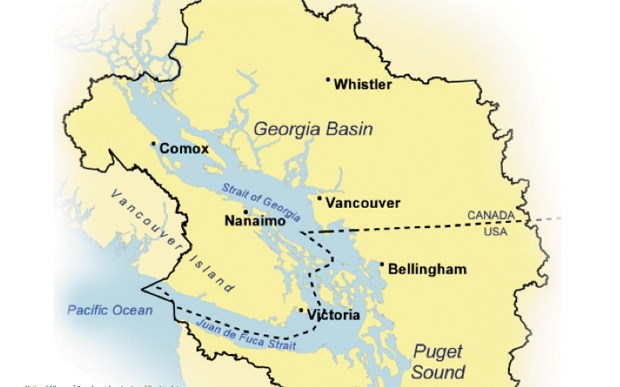 The Georgia Basin stretches from Vancouver Island to the east of B.C. and south into Washington State.Submitted

Seismologists from the University of B.C. released a new study that indicates Richmond will experience greater shaking than previously thought, should an earthquake occur to the south within 100 kilometres.

"What was most interesting is around Richmond is where the largest amplitude of motion could be seen during the simulations for deep earthquakes and shallow earthquakes, especially along the southwest," said Dr. Sheri Molnar who led the study published Monday in the Bulletin of the Seismological Society of America.

The study did not assess "the big one," which would occur beyond Vancouver Island at the Cascadia subduction zone. The study did assess the potential for smaller earthquakes affecting

Metro Vancouver, particularly from the south as it relates to Richmond.

The study was done through numerical simulations after studying the soils 40-60 kilometres beneath the region in what is known as the Georgia Basin. Shockwaves are found to have amplified in the soft glacial sediments and sedimentary rocks.

"Earthquake waves that enter material that is softer will increase in motion," said Molnar.

The study found Richmond could shake three to four times greater during an earthquake within the basin to the south.

The Georgia Basin is comparable to the basin near Seattle, but this study was a first look at examining multiple situations.

The intensity - or how much shaking you feel - depends on many things such as the depth, distance and strength of an earthquake.

"But the biggest factor is how close you are to the earthquake. A 5.0 (Richter scale) below you can inflict as much damage as an 8.0 from far away," she noted.

Molnar said a shallow earthquake beneath the city could be more damaging because of underlying geology. She said that as a researcher and seismologist her job is to inform those who make decisions.

"I'm putting the information on the table and what happens after that isn't my decision, thankfully," said Molnar.

"But to make decisions it's better to be informed and that's my goal," said Molnar.

John Irving, director of engineering for the City of Richmond, said seismic requirements are "robust" and new studies are looked at in developing building codes at a national level.

Irving said Richmond is often a "whipping boy" for the "persistent" myth of liquefaction.

"Whenever you see a building go up, any risk of liquefaction is basically eliminated with the ground improvements. ...There is nothing to indicate the buildings in Richmond won't perform any better or worse than those in Vancouver or elsewhere," he said.

Irving noted that many studies take a broad picture of the region and that more detailed studies of Richmond's soil are taken into account when building.

He also noted that building height restrictions due to flight paths prevent any potentially dangerous structures from being built in the city in the event of an earthquake that causes major swaying.