Vanprop is developing the Lansdowne Shopping Centre into a mixed-use precinct that could have up to 10,000 residents.
Feb 5, 2021 8:30 AM By: Maria Rantanen 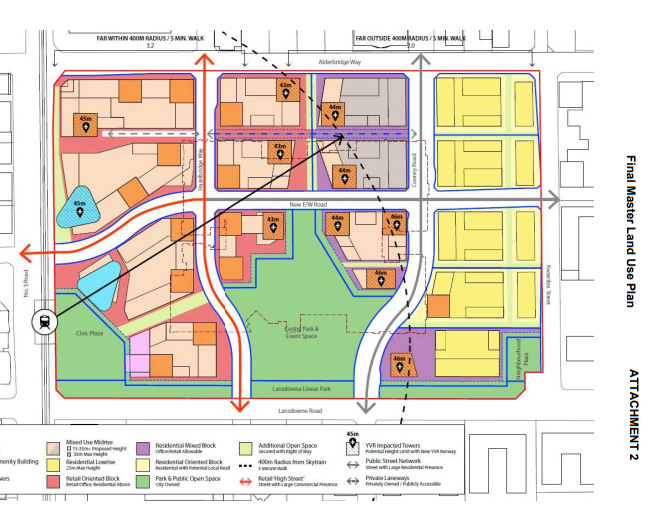 A phased development is being proposed at the Lansdowne Shopping Centre site.City of Richmond illustration

Richmond city council appears to be ready to allow Vanprop, the developer of the Lansdowne Shopping Centre site, to move forward with its plans to create a mixed commercial-residential precinct just off No. 3 Road for up to 10,000 residents.

Despite a unanimous vote to move forward at Wednesday’s planning committee meeting with some changes to the original plan, councillors raised concerns about the proposed park spaces, traffic problems and the number of rental units.

At the meeting, Coun. Bill McNulty questioned whether the 10 acres of park space is adequate for the “quality of life” of Richmondites.

He pointed out the Official Community Plan (OCP) was created more than a decade ago and the city has evolved since then.

Furthermore, this is one of two large developments in the downtown area, the Richmond Centre redevelopment being the second.

“When this thing is fully built out, you’ll never get into the downtown core,” McNulty said.

City staff, however, pointed out the 10 acres of park is consistent with the OCP with 3.25 acres per 1,000 population.

The 10 acres of park space was originally envisioned along Lansdowne Road.

The changes proposed at Wednesday’s meeting included splitting up the park spaces over the site with a five-acre park in south centre area of the property.

The corner of No. 3 and Lansdowne roads is envisioned as a cultural gathering area, a “civic plaza,” which could hold up to 5,000 people.

Coun. Carol Day, however, asked staff whether the civic plaza would be paved over.

Having more hard surface in the park area is based on the co-location to the Canada Line station, the plan for the plaza to be a gathering space as well as the amount of density, staff explained to the committee.

“It’s about using the space, not necessarily about having greenspace?” Day asked city staff.

The one-and-a-half acre civic plaza could be co-located with a city-owned building, according to plans submitted by Vanprop.

Also proposed are three public greenspaces – a linear park along Lansdowne that would provide a link between the Oval precinct and Garden City Lands, the five-acre park in the centre and a neighbourhood plaza at Lansdowne and Kwantlen roads.

The mixed use-development will be built in seven phases and Vanprop plans to keep the current mall with its stores until about half of the residential towers are built.

The redevelopment will start with residential towers in the northeast corner followed by a mixed-use development on No. 3 Road.

At Tuesday’s planning meeting, Polygon, which is developing a property in Capstan, was asked to register on title that there would be no rental restrictions – so each unit could be rented and there could be no age limits in any buildings. (Some stratas only allow a certain number of rental units per complex.)

When this was pointed out at the discussion about Lansdowne, city staff confirmed Vanprop was aware of the Polygon requirement and was “amicable” to doing the same to their development.

Coun. Harold Steves suggested, when it comes time to rezone the property, city council could allow more height on the east side in exchange for 20 per cent rental or low-income housing.

“It’s my opinion very few people are going to own their own home in 20 or 30 years, they’re going to be looking for rental housing,” Steves said.

City staff confirmed there was nothing in the plan before council now that locked them into a percentage of rental, and that would be part of future rezoning applications.

There will be a new east-west road going through the Lansdowne property and Cooney and Hazelbridge roads will be continued so they also cut through the property.

The OCP changes dealt with at the planning meeting must be approved at an upcoming council meeting, after which Vanprop will begin its first rezoning application.

They expect to start marketing their first towers with about 1,500 units in 2022.