Michael Wing Sing Fan will only answer to minor offence after death of cyclist Brad Dean in Richmond
Nov 7, 2017 8:53 AM By: Alan Campbell 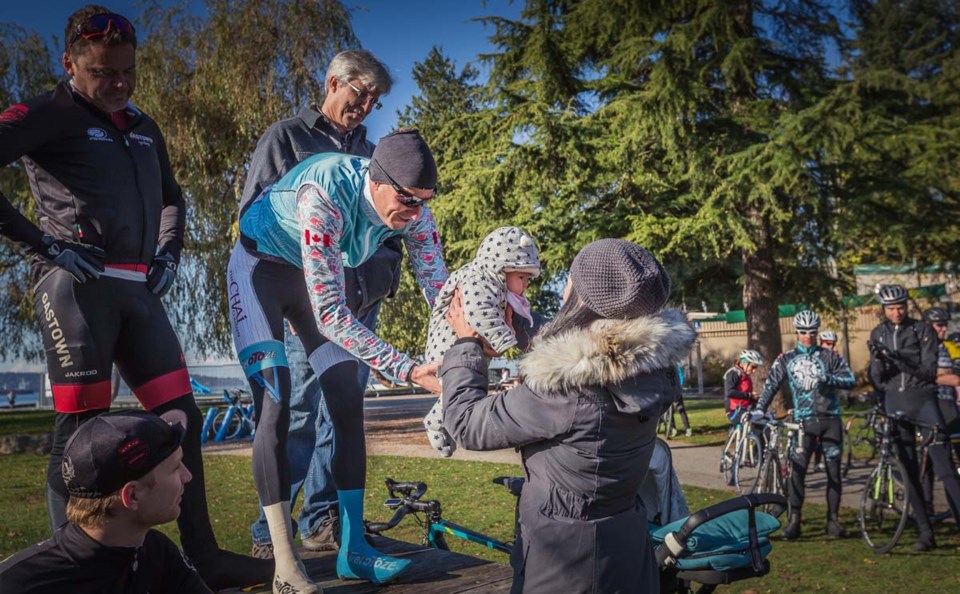 Brad Dean's close friend Kelly Jablonski gets handed Dean's baby daughter before the Ride to Remember event on Sunday. Brad's father, Tom Dean (at rear) is now preparing to lobby B.C.'s Attorney General in a bid to overturn Crown's decision not to press criminal charges against the driver involved in his son's death. Photo by TLBVelo Photography

The driver of the car that collided with a group of cyclists, killing one of them, will not face criminal charges.

Instead, Michael Wing Sing Fan was charged last week with driving without due care and attention after the fatal crash on the eastern most section of River Road almost exactly a year ago.

Brad Dean, 33, was out with five other cycling buddies from the Gastown Cycling Club for a Sunday morning ride when they were allegedly hit head-on by Fan’s Lexus as they travelled east, close to Westminster Highway.

A spokesperson for BC Prosecution Service told the Richmond News on Monday that Fan, who was 19 at the time of the accident, is scheduled to make his first court appearance at Richmond Provincial Court on Dec. 13.

If convicted, the maximum penalty Fan could receive is a $2,000 or six months in prison.

In a statement to CKNW, Dean’s wife, Adele Esnault-Dean, said she’s “very disappointed” by the lack of criminal charges.

“I do not feel that justice has been served at all,” said Esnault-Dean.

“What will I tell my daughter when she eventually asks me what happened to the man who killed her father? That he was given a fine between $100-$2,000 and a possible driving suspension for a year.”

Hundreds of fellow cycling enthusiasts, from the clubs Dean was a member of, turned out at Stanley Park on Sunday morning for the first ever Ride to Remember to honour Dean and all fellow cyclists killed or injured while on the road.