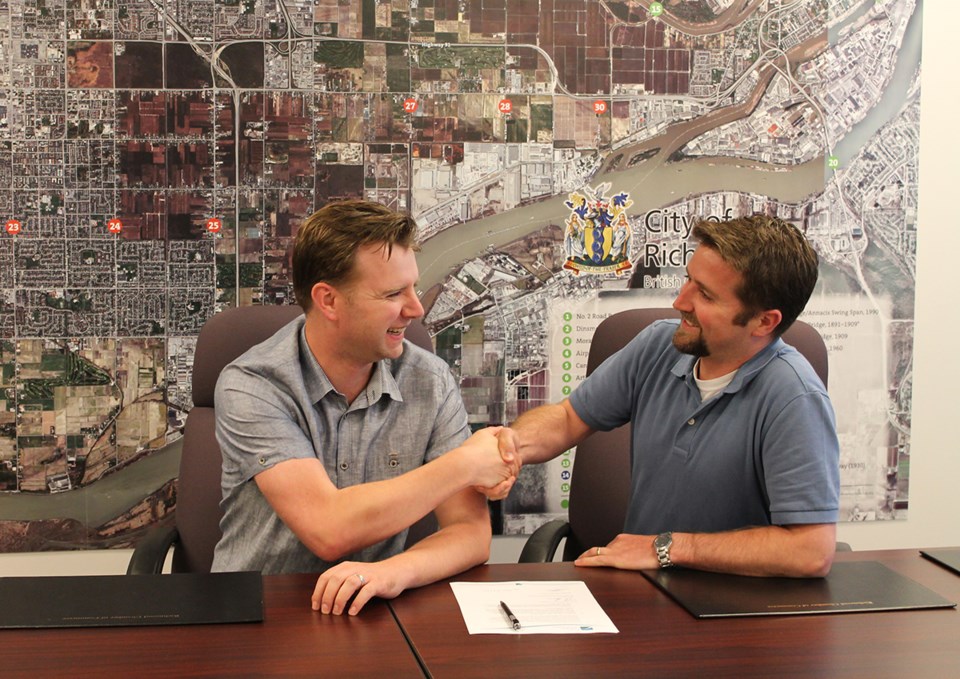 The new, incoming board chair and executive director for the Richmond Chamber of Commerce hope to engage the business community with "task forces" on contentious issues, such as the stalemate at Steveston's waterfront boardwalk.

"We're hoping to provide more opportunity for comments and public forums," stated chair Rob Akimow, who is also the director of advertising for the Richmond News with 13 years of marketing experience.

Should the chamber be able to act as an intermediary between the two embattled business groups — developer Onni and Steveston merchants — as well as the City of Richmond, which holds the power to rezone the land to commercial retail, it would be just one theoretical example of how the member-driven business group is hoping to better engage with the community to promote its interests.

Newly appointed executive director Matt Pitcairn, the organization's former director of communications and policy, said another opportunity for a task force is to help businesses that may be affected by the construction of the George Massey bridge.

“These are just ideas at the moment,” prefaced Pitcairn, 31.

Granted just 1,000 out of 14,000 registered Richmond businesses have chamber cards, Pitcairn said increasing membership is one of the chamber's main goals.

"We're competing with more interests, more options through the web. It's a changing world and we need to keep pace with the trends of society," said Pitcairn, who has severed ties with the Richmond Community Coalition after a failed bid to become a Richmond School Board trustee in November 2014.

Akimow, 37, said membership and engagement would start with getting more young business leaders on board.

"They're ambitious goals and with Richmond transforming so rapidly we need to make sure we're on pace," he said.

Pitcairn is a former regional organizer for the BC Liberal Party who spent three years with the chamber before his appointment Thursday. With a Bachelor of Arts in political science Pitcairn said his strength is advocacy.

As a testament to his advocacy, he won the silver medal for the Voice of Business award at the 2014 Canadian Chamber of Commerce.

In the three years Pitcairn said he worked on advocating for policies such as increased air access at Vancouver International Airport, a stronger economic policy on the Fraser River and inter-municipal mobile business licenses.

"I'm here to build as many connections in this community as possible," he said.

The chamber acts on behalf of business interests. If a business is having trouble with how a bureaucracy is acting, it's may be the chamber's role to step in.

Pitcairn said business taxes in Richmond are competitive but added that "lower taxes and less red tape are always a good thing."

But Pitcairn said he wasn't ready to discuss any of the issues he perceives need to be improved for Richmond's business community.

So, it remains to be seen if the chamber will have a more active role at Richmond City Hall with Pitcairn at the helm.

As in the case of Onni and Steveston merchants, the chamber may also act as an intermediary between business interests that may conflict with one another.

Last year Pitcairn helped research and write a report that urged all levels of government to focus on maintaining and improving the Fraser River’s economic viability. The report notes the importance of the fishing industry as well as the need for the port to expand operations.

Another key role of the chamber is to facilitate small business opportunities, said Pitcairn.

For instance, a newly established small business may need to network to gain clients and could find chamber events such as a golf tournament or dragon boat function a good opportunity to procure business.

On the flip side, a large established company such as Walmart may want to find community engagement opportunities as well, said Pitcairn.

On a bigger level, he noted that large business-minded Richmond-based organizations like Port Metro Vancouver (in part), London Drugs and YVR are also actively engaged with the chamber.

- "Begin a dialogue" on whether taxes should shift from direct taxation to greater reliance on user fees and consumption.

Richmond Chamber of Commerce 2015 policy submissions to BC Chamber:

- Ensure continuous flow of commerce to and from Asia-Pacific markets.