The City of Richmond has created an online map to track licensed bed and breakfast establishments under new short-term rental bylaws created last year.
Aug 6, 2018 9:00 AM By: Graeme Wood 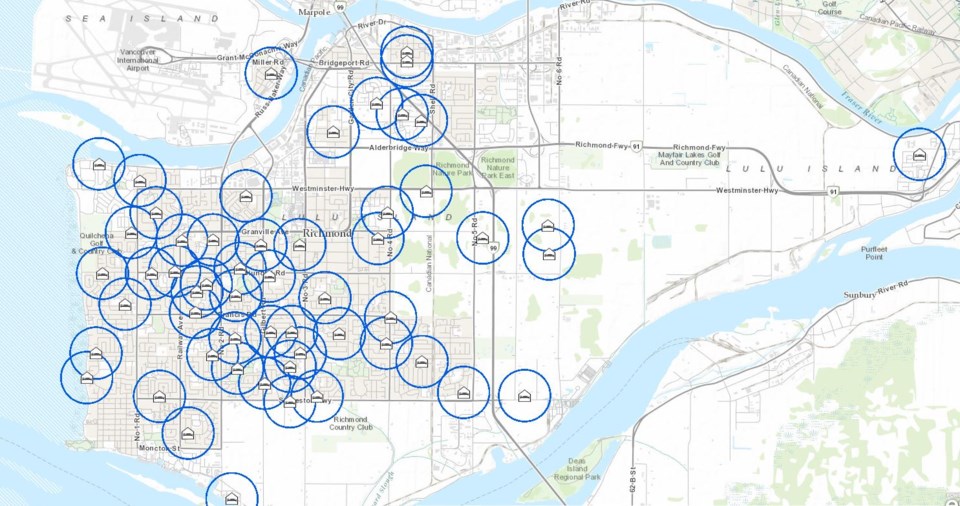 See the bed and breakfast online map at Maps.Richmond.ca/BnB. To report a complaint, email BylawRequest@Richmond.ca or call 604-276-4345.

“We published the new link on the website so that the public could have easier access to determine where the licensed businesses are and it they are within 500 metres (in case they’re considering opening a business themselves),” stated city spokesperson Ted Townsend.

Meanwhile, although hundreds of rental units continue to be listed online — many seemingly illegal — violation tickets issued by the city have dropped precipitously since an enforcement blitz in 2017.

Under a bylaw approved by Richmond city council in March 2017, bed and breakfasts are only allowed in detached homes. Hosts may only rent up to three rooms to up to six people in total. Save for about 20 grandfathered bed and breakfasts, no two can be within 500 metres of one another, in order to mitigate hotel-like activities in neighbourhoods. The map should allow residents to cross reference licences and addresses should they see such activity.

With 53 licensed bed and breakfasts now in the city, as of March, most of Richmond’s short-term rentals listed on Airbnb.ca — the eminent short-term rental company — are apartments. Although apartments are forbidden from bed and breakfast licences, residents (in houses or apartments) are nonetheless allowed to host up to two people under the city’s long-established “boarding and lodging” rules.  But dozens of available listings (61 for Aug. 23, a random date selected by the Richmond News) are for three or more guests in “entire apartments,” which is forbidden.

“We are constantly following up on complaints and doing our own research.  It is ongoing.  Our work is never done,” said Townsend. “As with any underground business, it is impossible to eradicate as long as there is supply and demand and people willing to ignore or avoid regulations,” he added.

In 2017, the city issued 87 tickets to violators, according to a staff memo to council in March. This year the city has issued 21 tickets to May 31, including 15 in May alone, per a community safety committee report.

Townsend said while one may be able to see numerous apparent offenses, the city still needs to “gather evidence that there is an actual infraction of the bylaws in order to take enforcement action, which can be difficult and time consuming.”

Townsend said council can anticipate a full report on the bylaw’s progress this fall. Recommendations about further changes to address illegal short-term rentals is anticipated, he said.

Short-term rentals have been a thorn amongst many residents in Metro Vancouver, a region with a rental vacancy rate of about one per cent. A new provincial law now allows strata councils to fine violators up to $1,000 per day. The City of Richmond also fines violators $1,000 per day.

This year, the city claims to have conducted 110 home inspections as of March. One site inspected is 7520 Steveston Highway, a large mansion fronting farmland. Since the complaints, including some to the News, the homeowner has successfully obtained a bed and breakfast licence for “Arica Funhouse.”

See the bed and breakfast online map at Maps.Richmond.ca/BnB. To report a complaint, email BylawRequest@Richmond.ca or call 604-276-4345.