RCMP probing cause of No. 3 Road blaze on Sunday night as residents claim it was second incident in a week
Apr 18, 2016 12:41 PM By: Alan Campbell 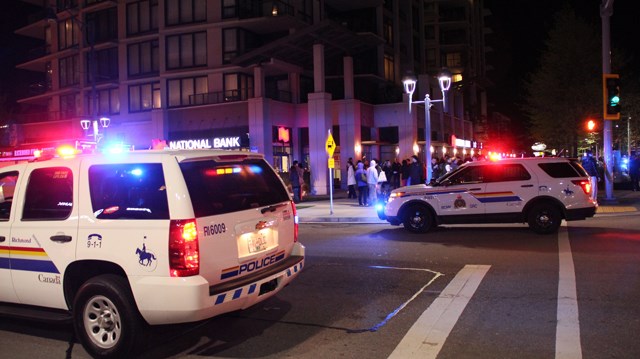 Richmond Mounties are investigating a Sunday night fire in a No. 3 Road apartment blockRyan Stelting

Richmond RCMP is investigating a suspicious fire late on Sunday evening in City Centre which is thought to have displaced up to eight families.

Shortly after 11 p.m. the Mounties were called to the 5800 block of No. 3 Road  to assist Richmond Fire-Rescue with a fire on the sixth floor of an apartment building.

The Richmond News understands a Molotov device had been thrown on the floor and the fire was knocked down by the sprinkler system.

Residents of the apartment claim this is the second time in a week that the building has been targeted, adding that a smoke bomb was let off and offensive graffiti was found.

However, according to the RCMP, the cause of the fire has yet to be determined, but is being treated as suspicious.

“We are greatly relieved no one was injured,” said Richmond RCMP’s Cpl. Dennis Hwang.

“We are currently reviewing surveillance footage and conducting interviews with witnesses.

“One of our specially trained fire investigators is working with our counterparts from Richmond Fire-Rescue.”

No injuries were reported, but several families were unable to return to their homes due to water damage.