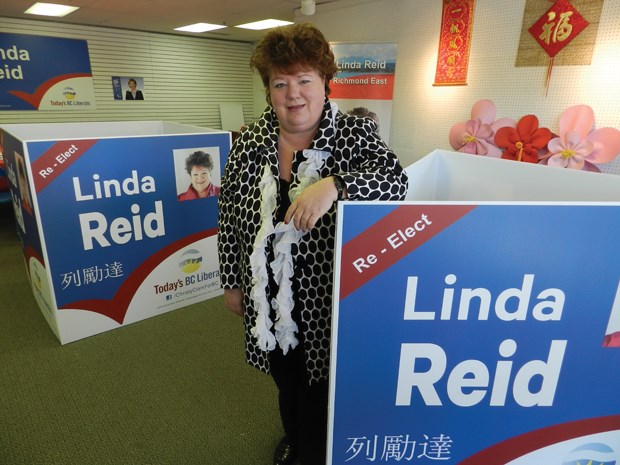 Speaker of the Legislature Linda Reid grounded her campaign manager's taxpayer-paid travel tab and scrapped a free snack bar for politicians as MLAs on all sides gently chastised her Tuesday for not keeping them in the loop on her recent spending.

"I certainly apologize, and I recognize the concerns which have been raised have detracted from our work to make the assembly's financial management more accountable and transparent," Reid told MLAs on the legislature management committee.

She said she takes full responsibility for the public uproar over tens of thousands in spending, including $13,965 in new drapes for the dining room, a $48,412 high-tech computer console, and a $13,449 TV lounge for MLAs stocked with free muffins and coffee that sat on a $733 food table.

She also spoke for the first time about hiring her Richmond East campaign manager as an executive assistant, and billing taxpayers for hotels, flights and meals required for the staffer to repeatedly commute from Richmond to Victoria.

"In order to express concerns raised regarding staff travel expenses, my executive assistant has been assigned to work out of my Richmond East constituency office, thereby eliminating any ongoing expenses for travel and accommodation," Reid said.

She did not reveal how much the public has spent on travel to date, figures that were first requested by The Vancouver Sun last month and which the Speaker has refused to provide.

Both NDP and Liberal MLAs complained they were blindsided by the Speaker's expenses, even if some of the work, such as a $42,949 wheelchair ramp to the library, was publicly defensible.

"I didn't know any of that when the cameras went on me, and the microphones were stuck in front of my face," said NDP house leader John Horgan. "I would suggest that's not good enough."

Even projects like the wheelchair ramp went over budget, and Horgan said he has no clear idea why.

"If we are going to embark on a transparency agenda, it starts with every penny, right down to the muffin," said Horgan.

Reid said she accepts the criticism and regrets she got "far more than I bargained for" in the touch-screen computer console, which sits in front of her in the chamber and comes with hand-crafted ornate wood panelling.

Liberal whip Eric Foster said when the Speaker's spending priorities changed those projects should have come back to MLAs on the legislative management committee.

Liberal house leader Michelle Stilwell, who is a Paralympian, said she appreciates the accessibility for B.C.'s three MLAs in wheelchairs.

MLAs also voted to wrestle more control away from the Speaker on spending, so that projects that cost more than $5,000 or are 10 per cent over budget are brought to the attention of the management committee. Horgan said the recent media coverage of Reid's expenses was a helpful push in the right direction.

"It has also curtailed the muffins. And it will curtail other frivolous expenditures. That's the essence of transparency. If people are watching you, you use your head faster than you would otherwise."

Reid did provide one previously withheld figure to MLAs on Tuesday. She said she has spent $79,000 to upgrade security in her Richmond East office after a "number of security assessments" carried out in the wake of an alleged attempt to explode a bomb at the legislature on Canada Day.