The owner of a $155,000 car was so incensed with the service he got from Richmond’s Mercedes-Benz dealership that he flew all the way to the luxury car giant’s German headquarters just to complain.
Jun 8, 2020 3:29 PM By: Alan Campbell & Nono Shen 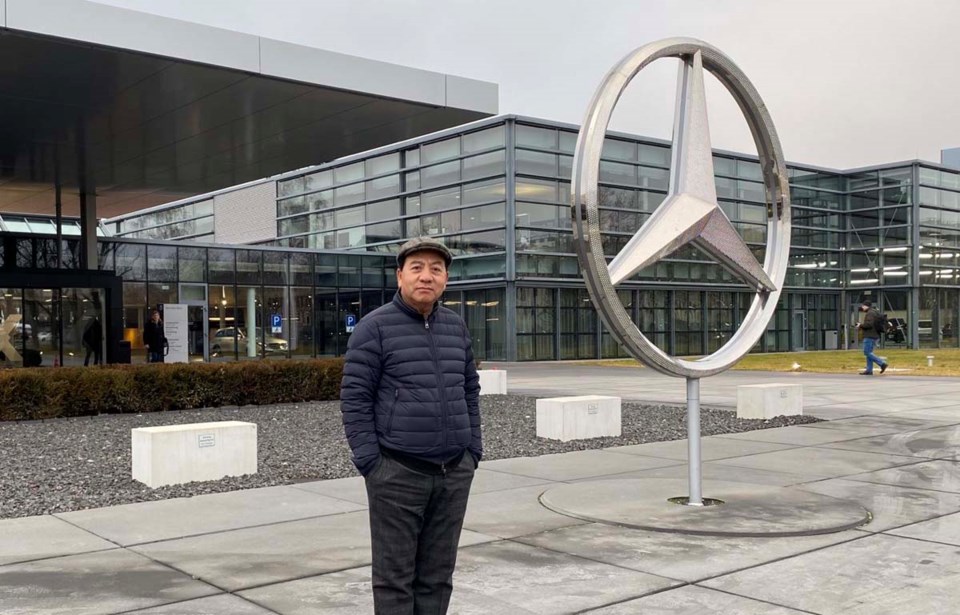 Da Tong Yang, at Mercedes-Benz' headquarters in Stuttgart, Germany, where he flew to complain about his $155,000 car. Photo submitted

The owner of a $155,000 car was so incensed with the service he got from Richmond’s Mercedes-Benz dealership that he flew all the way to the luxury car giant’s German headquarters just to complain.

Da Tong Yang bought his wife, Guifang Huo, the new S550 model sedan in 2017, because the couple perceived it to be one of the safest luxury cars on the road.

A year later, the couple claimed the car’s steering wheel locked while it was being driven on West 41st Avenue in Vancouver, causing it to apparently get within a foot of a concrete wall.

The vehicle, which reportedly had only 6,400 kilometres on the clock, was eventually towed to Mercedes-Benz Richmond Service Centre the next day for repairs.

However, the couple refused to believe the car was safe to drive and demanded their money back or a replacement vehicle.

Mercedes-Benz said no and Huo, the registered owner of the vehicle, filed a lawsuit in 2019, claiming damages, mentally and financially.

With the court wrangle going nowhere, Yang decided to take matters into his own hands and, in January this year, jumped on a flight to Mercedes-Benz head office in Stuttgart.

There, with the help of a German friend, Yang pleaded his case with a company representative, before getting a tour of the impressive headquarters.

He told the Richmond News he “went there to find justice, not only for him but also for other drivers.”

Yang didn’t make any progress, however, and only received an email, saying they would look into the matter.

The car in question has since been sitting unused in the couple’s garage.

According to Huo’s lawsuit against Mercedes-Benz Canada, the mechanical failure has caused her and “her husband considerable mental distress and anxiety, including fear for their family's safety and the safety of the general public.”

It further alleges that Mercedes-Benz, after fixing the fault, “was unable to ensure the plaintiff that the defect causing the failure had been repaired or that the failure would not reoccur.”

Huo claims that the vehicle she purchased was “unreliable, unsafe, and does not provide the peace of mind a luxury vehicle should.”

As such, she alleges that Mercedes-Benz Canada “breached its warranty of fitness” and the vehicle “was not reliable and safe, and had a potentially fatal defect that caused the failure.”

According to the lawsuit, Huo claims to have suffered loss and damage, including: out-of-pocket expenses; mental distress; loss of use and enjoyment of the vehicle and loss of value of the vehicle.

Huo is seeking unspecified general and special damages and costs associated with her legal action.

Mercedes-Benz Canada has denied that the steering issue affected the vehicle’s brakes or safety features or that it resulted in “any personal injury or property damage.”

In its reply to the lawsuit, Mercedes-Benz said it replaced the power steering gear and attempted to return the vehicle to Huo, while providing her with a verbal explanation of the issue and the repair.

Two months or so later, with Huo still not satisfied, Mercedes-Benz said it provided her with an additional written explanation of the issue and the repair.

None of the allegations above have been proven in court.