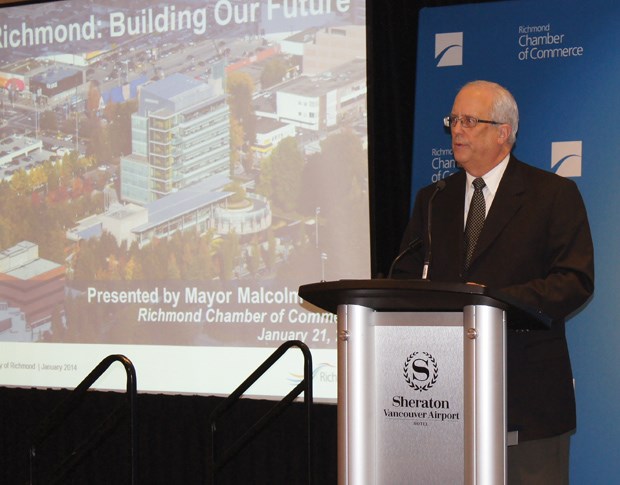 Mayor Malcolm Brodie addresses the Richmond Chamber of Commerce with his annual address.Graeme Wood/Special to the News

At least three of Richmond’s major political slates have no plans to challenge incumbent Mayor Malcolm Brodie. And, an independent candidate has yet to voice a desire to see a change in the city’s most powerful political seat come election time in November.

This week the president of the Richmond Community Coalition, Rob Howard, told the Richmond News there is broad support for Brodie within the newly formed, self-proclaimed non-partisan party.

“There is no burning desire,” to challenge Brodie, said Howard.

At least six of the party’s 12 directors contributed to Brodie’s 2011 campaign.

Richmond First has tabled its candidates, but once again did not challenge the independent Brodie.

Council candidate Michael Wolfe of RITE Richmond, who once challenged Brodie in 2005 at the age of 23, said he couldn’t compete with the “political machine” Brodie has built for himself.

“I’m not about to go against that because I’m a full-time teacher and can’t take work off. So, I’m going to focus on city council and I would rather do a term on council before running for mayor,” said Wolfe.

Last election Brodie had a leftover campaign balance of $164,026, which was transferred to the City of Richmond in a trust fund. In dinner fundraisers alone Brodie raised and spent in excess of $100,000.

At the end of the election RITE, as a whole, had 41 cents remaining in its election account, after spending just over $12,000.

The Richmond Citizens’ Association could not be reached for comment.

Brodie, a lawyer, has been mayor since 2001 and has served on several Metro Vancouver committees.

Sunny weather in forecast for the majority of the week in Richmond
Jun 14, 2021 7:35 AM
Comments