Mandated English off the table in Richmond - again 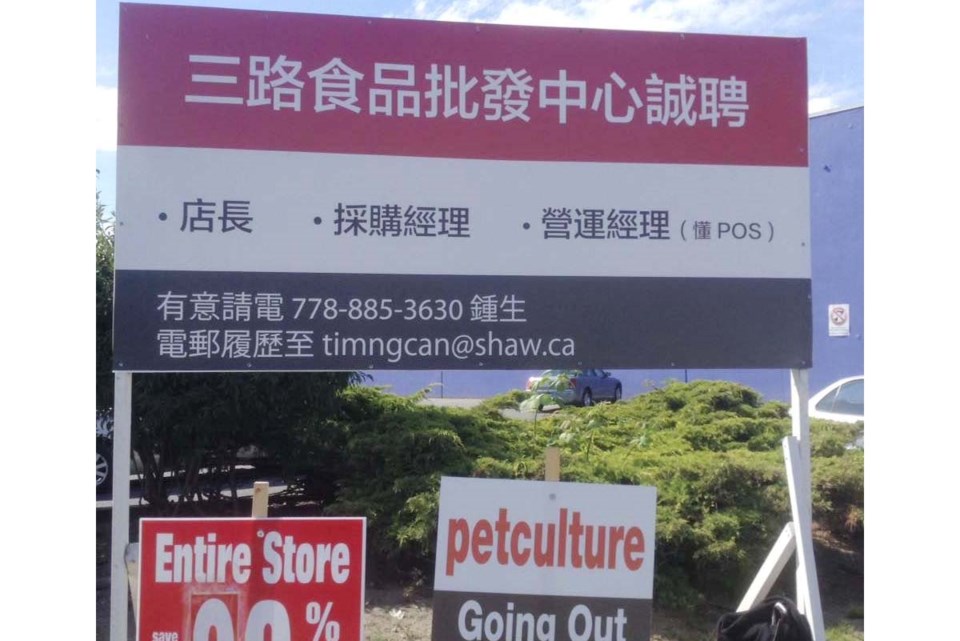 A property manager said he didn’t think to include English on an employment sign.Graeme Wood

When is a bylaw not a bylaw? Maybe when it’s a policy?

If you’re confused, then you’re in good company, along with a few members of city council late on Monday night.

After three hours of bafflement and bemusement at city council chambers, what was left standing was a proposed, new sign bylaw that will no longer demand 50 per cent of one of Canada’s official languages on future business signs that require a permit.

Possibly in its place could be a “policy for co-operative use of English language on signs,” which was a motion put forward by Coun. Bill McNulty, who, only a week previously, successfully inserted the requirement for English or French into the proposed bylaw.

McNulty was one of six councillors who voted Monday night in favour of, this time, taking the demand for an official Canadian language back out of the new sign bylaw proposals, which focus mainly on de-cluttering.

Asked by the Richmond News on Tuesday morning to explain the change of heart, McNulty claimed that he wasn’t previously aware the city had a policy that educated business owners about having English on their signs, whereby staff ask them to voluntarily use 50 per cent of the language.

“I was able to establish with staff (on Monday night) that we already have a policy,” said McNulty.

“(A language bylaw) would have been redundant; we already have the policy, I just wasn’t aware of it.”

Included in last week’s staff report, however, was specific reference to city staff successfully encouraging, since 2015, around 900 business owners to have a minimum of 50 per cent English on their new signs.

And McNulty, at last week’s meeting, acknowledged the so-called “co-operation” between city staff and business owners, but insisted that the language requirement be inserted into the new sign bylaw anyway.

“To me, (the policy) satisfies both sides,” he added.

“Now that it’s going to be made a policy, that will make a difference.”

The latest move by McNulty was preceded Monday evening by Coun. Ken Johnston pulling his previous support for a bylaw which mandated half English or French on the signs.

With the vote last week being 5-4 in favour of language provisions on new signs, Johnston’s flip-flop was enough to steer the controversial bylaw - which city staff and lawyers had warned might contravene the Canadian Charter of Rights and Freedoms – away from language.

“The last week or so is one of the hardest I’ve had (on council) and I’m sensitive to both points of view,” said Johnston.

“…regulation is going to stir up a hornet’s nest…I believe outreach is the most constructive path. After serious reflection, I’m changing my mind.”

McNulty, perhaps anticipating that the language mandate would now not have council support, moved towards updating a policy instead.

“Rather than see the whole thing die on the vine, maybe if we have a policy (that includes language),” said McNulty.

McNulty added that the city was “skirting around the issue” by focusing on de-cluttering signage, rather than the language on them.

“Fostering inclusion works two ways. We need to communicate with each other…it’s not going to go away overnight.”

The “policy” referral back to staff, however, was opposed by several councillors, including Harold Steves, who argued vehemently Monday night that there is little difference between a bylaw and a policy.

“I see no difference…it’s going to be just as vulnerable to the courts,” said Steves, who was one of the four who supported McNulty’s move last week to demand English or French on future, regulated, business signs.

With the 50 per cent language provision removed from the proposed sign bylaw – which now focuses mainly on de-cluttering storefronts and businesses – Steves also questioned why the city was even bothering with the bylaw at all, if it wasn’t going to demand English or French.

“De-cluttering is just as contrary to multi-culturalism as anything else. Why are we harassing people?”

The majority of public comments made, during public consultation last year on the subject, demanded that English be required on business signs in the city, leading to McNulty’s amendment last week.

However, as pointed out by Mayor Malcolm Brodie last week and on Monday, city staff have gotten “100 per cent compliance” to have English on signs from around 900 permit applications made over the last two years.

Since city staff’s outreach program seems to be working, Brodie feels there is no need to implement a bylaw that requires English or French on future business signs.

“Given the co-operation we’ve received, I think we’re getting the results we’re looking for…and getting community harmony.

“The damage that can be done (from a language provision) is significant.”

About 10 members of the public spoke to city council Monday night, with varying views on the proposed demand for an official language on future business signs.

The “de-cluttering bylaw,” minus the language provision, will now go forward to a public hearing, possibly later this month.

The argument over the lack of an official Canadian language on signs in Richmond has raged on and off for decades in Richmond, with it last surfacing in 2015.