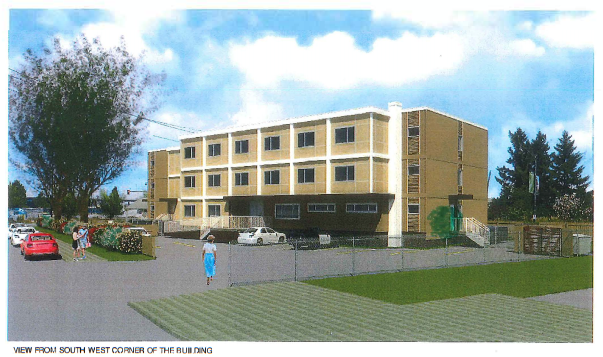 A temporary modular home is being planned close to Bridgeport Canada Line Station.City of Richmond illustration

The public can give feedback Monday evening on two very different developments in Richmond: a proposed temporary modular housing (TMH) building close to the Bridgeport Canada Line Station and the redevelopment of the Lansdowne mall property.

A public hearing is scheduled for 7 p.m. Monday for these two items, as well as several other developments in the city.

Vanprop, the owners of the Lansdowne mall site, are asking for changes to the Official Community Plan in order to launch a seven-phase redevelopment which will eventually include condos for 8,000 to 10,000 residents as well as retail space, some parks and greenspace.

Vanprop has been in discussions with the Richmond School District about securing a school site on the property as well.

The City of Richmond’s current policy is to ask for 10 per cent rental, but city staff is currently working on new policy suggestions for rental requirements in new developments.

The TMH building would be the second in Richmond, a home for 40 people who are homeless or at risk for homelessness, funded and built by BC Housing.

The public hearing for the proposed TMH at Smith Street and Bridgeport Road is for a temporary use permit because the land is currently zoned commercial.

The building will be operated by the non-profit Community Builders.

The temporary modular building is expected to be built this year and will have two full-time staff on-site at all times as well as other health and mental-health workers.

The public is not allowed to attend in person because of COVID-19, but those who want to speak can register – by 1 p.m. the day of the public hearing – by phone.