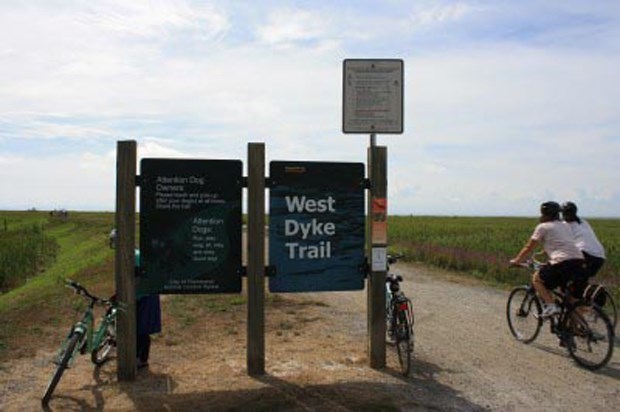 The West Dike Trail is known for its wildlife. File photo

A jogger is warning people to beware after he was apparently “attacked” by an owl while running on Richmond’s West Dike Trail.

Mark Ritchie said he was running along the trail, near Westminster Highway, around 6 p.m. when he suddenly felt the owl’s claws on top of his head.

“It was quite dark out, because the moon had not come up yet,” said Ritchie.

“(The owl) just swooped down behind me and put its claws into the top of my head for several seconds.

“When I reached up to bat it away with my arm, it flew away. I think it mistook my black wool hat as something other than the rest of me.”

Ritchie acknowledged that bird watchers go to Terra Nova to photograph owls and the birds “help control the rat population.”

“But runners and people with small pets should watch out,” he added.

Incidents such as this one are relatively common in Richmond, especially on the dike trails, where people frequently jog.

Indeed, the Richmond News has reported several times over the year stories of joggers being mistaken for prey by owls.

Wildlife experts have said the birds are likely mistaking the joggers for squirrels, especially if the person has a ponytail or a hat that looks, from high above, like something they want to eat.

Experts have said in the past that the creature in question is likely a barred owl which, when hunting, are totally focused on their prey and nothing else.

It’s only when they hit their target that they realize its 150 pounds heavier than it should be. That’s when they bounce off.

High streamflow advisory in effect for Fraser River in Richmond
Jul 4, 2020 11:00 AM
Comments