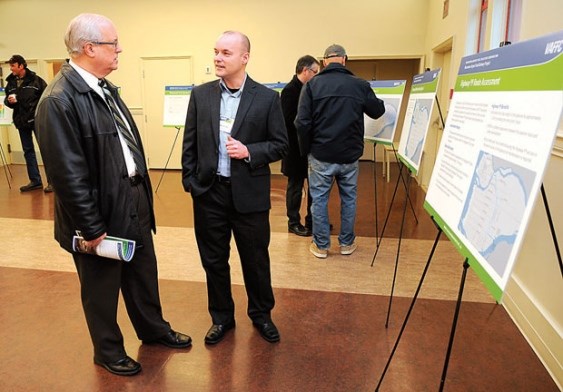 VAFFC project director, right, talks to Mayor Malcolm Brodie at a recent open house to discuss the potential routing of the fuel pipe from the south arm of the Fraser River to YVR. Pollard said Friday's blaze at the Cherry Point refinery in Washington State reinforces VAFFC's stance that its current fuel supply is vulnerable. Photograph By Chung Chow. Feb. 2012.

A consortium of major domestic and international airlines — including Air Canada and WestJet — planning to build a jet fuel delivery system on the banks of the Fraser River is seeking legal fees from VAPOR, a group of local citizens that took the companies to court last year.

VAPOR had unsuccessfully challenged the consortium's environmental assessment on technical merits: that the provincial government and the consortium, known as the Vancouver Airport Fuel Facilities Corporation, did not provide for adequate public consultation leading up to the December 2013 granting of the environmental certificate.

Since losing the judicial review in B.C. Supreme Court in early 2015 the province has subsequently dropped its request to claw back legal fees. However, VAFFC is seeking compensation.

VAPOR recently instructed its lawyer to apply to Madame Justice Dillon, who heard the judicial review, for an order that each party pay its own legal costs. Dillon is expected to make a decision on Friday.

When asked why that is, VAPOR director Scott Carswell said the group didn’t raise enough money to cover legal fees in the event of a loss.

“We were hoping we would win and it was a bit of a calculated risk on our part based on the advice we had. Because it was in the public interest and not a malicious action we thought that the court would tell everyone to pay their own fees,” said Carswell.

In total, VAFFC is seeking upwards of $20,000, said Carswell. VAPOR had only raised about $55,000 for the challenge and ended up using it all. Of that total, Carswell said VAPOR was fortunate enough to receive $20,000 from West Coast Environmental Law’s environmental dispute resolution fund.

Carswell said VAFFC could afford to drop its request for fees.

“It kind of feels like they’re trying to send us a message but I could only guess,” said Carswell.

The Richmond News called VAFFC to ask its spokesperson about the matter.

“Since VAFFC was included in the court action, it was obliged to defend the consultation process and incurred substantial costs as a result. The judge concluded that the process was fair and followed the legislative consultation regime reasonably, and that VAPOR participated in the review and could not identify a single issue that it raised that was not dealt with during the EAO review. It is fair that VAPOR pay a portion of VAFFC's cost for this court action,” said Pollard, adding, “VAFFC also undertook additional public consultation before the formal review and outside of the formal review.”

VAPOR had contended the public consultation periods were too short.

It’s also contended the environmental assessment was flawed, however legal it may have been.

Carswell said the federal government wasn’t present, save for Port Metro Vancouver, which will lease the land to VAFFC.

“The port is benefitting from this project financially. It’s an inherent conflict of interest,” he said.

“Having the Department of Fisheries and Oceans and Environment Canada involved would have made for a stronger environmental review,” added Carswell.

VAPOR, Carswell contended, is now directing its efforts at the new Liberal government.

“MP Joe Peschisolido in (Steveston) Richmond East has publicly said (the jet fuel project) should have been done under a full federal review. And that didn’t happen. It was a harmonized review by the province,” said Carswell.

“The province has no mandate to study the impact of the project on fisheries. That alone is a massive gaping hole in the review that was conducted.”

The project will consist of six jet fuel storage tanks near Riverport and a new pipeline to Vancouver International Airport.

Richmond auto body business expands to six locations
Dec 3, 2020 12:20 PM
Comments
We welcome your feedback and encourage you to share your thoughts. We ask that you be respectful of others and their points of view, refrain from personal attacks and stay on topic. To learn about our commenting policies and how we moderate, please read our Community Guidelines.