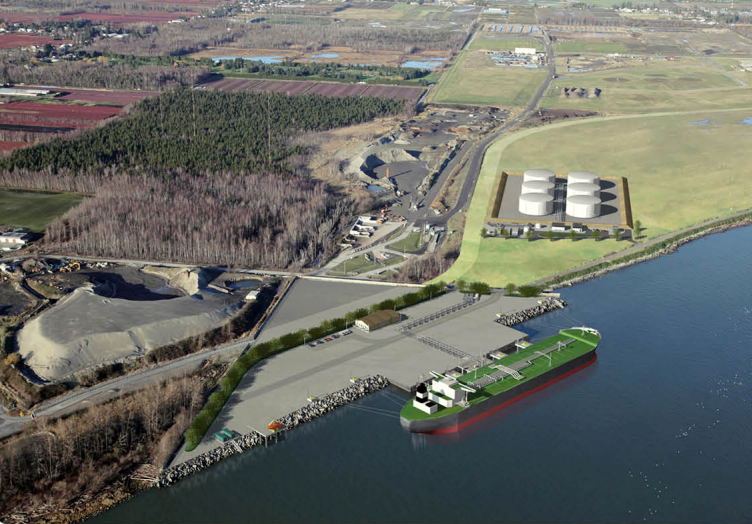 An artist rendering (from VAFFC) of the proposed jet fuel terminal in Richmond B.C. The tanker shown here is shorter than a Panamax class tanker that could be docking on the south arm of the Fraser River.

It’s official. Construction on a jet fuel terminal on the Fraser River’s south arm, as well as a pipeline crossing diagonally across Richmond to Vancouver International Airport, will begin as early as next week.

The permit marks the first of several proposed projects to get the final green light, resulting in Panamax sized tankers running up and down the Fraser for fossil fuel deliveries.

On Wednesday, Port Metro Vancouver (PMV) issued a project permit to the Vancouver Airport Fuel Facilities Corporation, a consortium of airlines, allowing it to build a loading dock and six storage tanks for the jet fuel.

The facility, near the Riverport entertainment complex, will also include a small operations building, a foam storage and incident command centre and spill containment infrastructure.

It is anticipated construction will take 18 to 24 months.

Each five-storey tank will store 13.3 million litres of fuel and there are provisions to add two more tanks at a later date.

The port was able to issue the permit following what it describes as a “harmonized federal-provincial environmental review” that was approved by the B.C. government in December, 2013.

Critics have charged the environmental review was flawed from the beginning, with the Department of Fisheries and Oceans, Environment Canada and some nearby First Nations groups left out of the process.

The City of Richmond is attempting to review the permit.

“We’re looking to see what conditions they’ve put on the permit approval because we’ve made inputs” with regards to fire safety and environmental concerns about the unloading of the fuel, noted Richmond’s spokesperson Ted Townsend.

While the new Liberal government recently implemented interim measures for the environmental assessment process, existing projects, such as this one, will not be affected.

The new measures include looking at how projects contribute directly and indirectly to greenhouse gases and pollution.

Mayor Malcolm Brodie repeated his opposition to the facility two weeks ago in his annual address.

He said city council wishes “to ensure a consistent supply of jet fuel to the airport,” however it would have preferred an alternative delivery method.