Is bridge dead in the water? Richmond thinks so

Is the George Massey Tunnel Replacement Project dead? Motorists using the aging tunnel have been wondering that ever since the Green-backed New Democrat government suspended the 10-lane bridge project between South Delta and Richmond in 2017, just as
Nov 28, 2018 9:40 AM By: Sandor Gyarmati 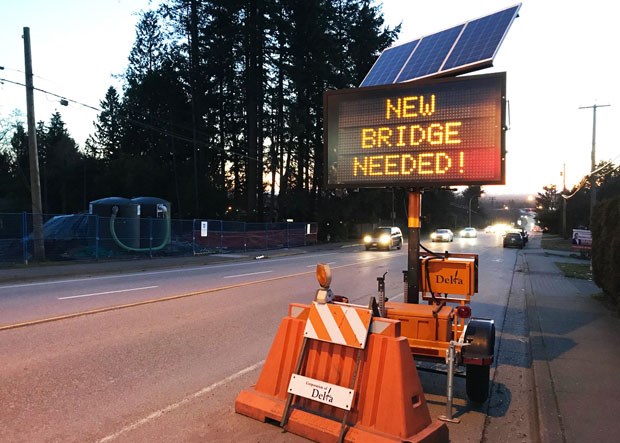 Motorists using the aging tunnel have been wondering that ever since the Green-backed New Democrat government suspended the 10-lane bridge project between South Delta and Richmond in 2017, just as as construction was about to commence.

Now, at least according to Richmond’s engineering department, it appears the project is dead. What’s more, Delta Mayor George Harvie also appears resigned to that fact.

Richmond Mayor Malcolm Brodie and senior staff met with provincial Transportation Minister Claire Trevena last week for an update on the issue and independent technical review initiated after the project was halted. According to a follow-up report to Richmond council, the project is not just suspended, but cancelled outright.

“Given that the previous project was cancelled, the minister advised that any future crossing improvement option would not include a 10-lane bridge. The ministry recognizes the significant negative impacts that the scale of such a project would have on the host communities, particularly for Richmond…”

The report also notes, “The goal is to work collaboratively to develop a solution to address congestion at the crossing and along the Highway 99 corridor that has the collective support of the region. The preferred option would also address corridor-wide issues regarding transit connections, impacts to local roadways, the scale of the interchanges and the interface at the Oak Street Bridge.”

The Optimist asked the ministry if Trevena did indeed tell Richmond officials the bridge project, which was started by the previous Liberal government, is cancelled. The only reply was a timeline of the review.

“In September 2017, Minister Trevena put the previously proposed 10-lane Massey replacement bridge on pause, responding to concerns from Metro Vancouver and people in the area. Stan Cowdell was retained to undertake an independent review of the project, and look at options available for this corridor. The minister received the report in June, and it is under consideration. Minister Trevena is discussing its findings with Metro mayors before making the independent review – and government’s next steps - public before the end of the year.”

Harvie, who has championed the bridge as the best alternative to congestion, said he hasn’t seen the Richmond report until now, but believes the original project is unlikely to proceed.

“This government has the right to take a look at it and we’ve already given comments to the minister of transportation regarding our views. My request is that the day a bridge opens, that it includes the middle two lanes for rapid bus, and that it be designed in a way that it can accommodate light rail in the future so that we’re not building two separate crossings. We need to get people out of their cars,” he said.

Harvie added that one consequence of the removal of bridge tolls has been more single-occupancy vehicles on the roads.

“The concern Vancouver and Richmond about pushing traffic further down Oak Street, I respect that. No new bridge should open without the opportunity for a very improved rapid transit system for people south of the Fraser. People I’ve talked to said they would be glad to get out of their cars if they had a reliable mode of transportation to their work,” Harvie said.

Metro mayors, including Brodie, had voiced opposition to the multi-billion dollar bridge project.

Delta South MLA Ian Paton, openly frustrated at the wait for Cowdell’s report, has repeatedly said independent reviews have already been done, confirming a bridge is the most cost effective and environmentally sound choice to replace the aging tunnel.

It’s not clear yet if the province might consider a scaled-back bridge, nor how long consultations would take place with the region’s mayors on that option.