Media outlets from at least six countries have documented Richmond's growth and demographics shift over the past two years
Aug 12, 2015 12:19 PM By: Graeme Wood 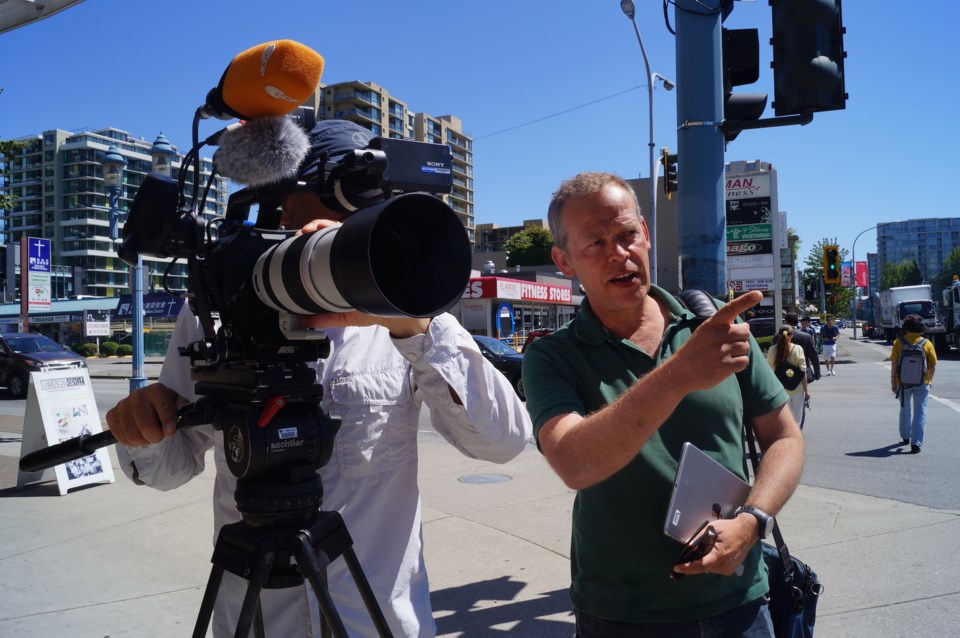 n Johannes Hano, of ZDF German TV, directs his cameraman during a recent visit to Richmond to document the effects of immigration in the city as well as Metro Vancouver. Hano’s crew was making a 90-minute show on Canada; other stops included the Alberta tar sands, the Arctic, the Prairies and Montreal. Photo by Graeme Wood/Richmond News

Richmond’s significant demographic shift as a result of immigration from China, as well as city council’s contentious handling of foreign-language business and real estate signs, has brought the city significant international media attention over the past two years.

Most recently, in June, Germany’s largest broadcaster, comparable to the Canadian Broadcast Corporation, spent several days in Richmond filming and documenting changes to both this city and Vancouver.

ZDF German TV producer Johannes Hano, based in New York, was producing a 90-minute documentary on Canada, which has yet to air. He travelled from coast to coast and said about 10 minutes of the two-segment show will be devoted to Metro Vancouver, including Richmond.

The documentary will touch on the effects of foreign investment and wealth-based migration, largely from China, on housing affordability as well as socio-economic dynamics.

“It is very interesting what is going on here. We, too, have lots of immigration in Germany, but it is different; we have many refugees,” said Hano.

The global media, including Hano, has sought out community activist Kerry Starchuk, who helped raise a petition to include some English or French on all signs in the community in 2013.

“The city has actually really not been acting responsible for what they’ve created. It shouldn’t have been up to the residents and a person such as me to put their reputation on the line, but it’s heart-driven, it’s my home,” said Starchuk, who claims she was told by a now former city planner that the city’s unwillingness to implement a sign bylaw was a result of potential harm to its international reputation.

Meanwhile, media from Japan and South Korea have also visited Starchuk’s home.She's also been quoted in media stories from Armenia, the United States and Hong Kong.

That’s not to mention the countless national headlines Starchuk has been a part of, as well as the flurry of local news outlets that have sought her opinion as a de facto spokesperson for part of the Richmond community.

Both Japanese and South Korean media made comparisons to issues in their own countries regarding Chinese immigration.

According to the most recent National Household Survey from 2011, 62 per cent of Richmond residents are foreign-born. The national rate is 21 per cent. Whereas in 1991 when ethnic Chinese accounted for 17 per cent of the city’s population, they now account for 47 per cent (2011).