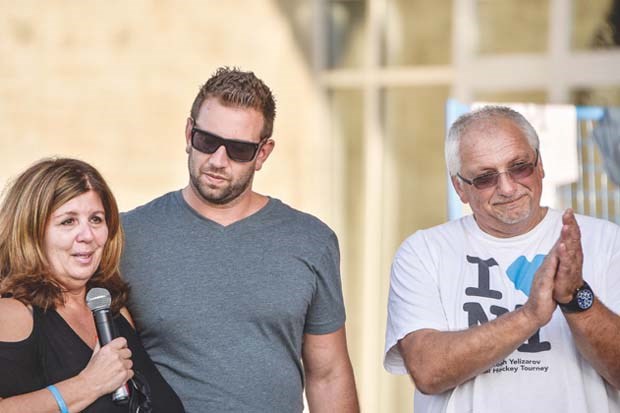 Roughly 120 players joined 500 or so others — fans and family friends — to support a variety of charities in memory of Richmond hockey player Noah Yelizarov who, in 2004, died in an accident while travelling in Thailand.

Proceeds raised through the event’s three-on-three tournament, silent auction, beer garden and dinner will be distributed to Canuck Place, BC Children’s Hospital and other groups including a new one this year called Feed-U-Cate 38 that provides meals for Richmond school students in need.

Organizers said the tournament has raised around $200,000 since it started, and this year’s $30,000 is a preliminary figure.

Don Taylor, who organizes the hockey side of the event said the ice traditionally draws 20 or more teams that are split across two divisions.

This year the Division One Champions were Team Yelizarov, led by Noah’s older brother, Jonathan and Ladner’s David Rutherford, a former Vancouver Giants forward and current member of the AHL’s Charlotte Checkers, the minor league affiliate of the NHL Carolina Hurricanes.

Top honours in Division Two went to Team Langham which was composed of players who played with Noah Yelizarov in their youth.

“Noah and Jonathan had a lot of good contacts in the game who are all now in the 25 to 33 age range — players who are at the prime of their playing careers who take time out to come and support a very worthwhile cause,” said Taylor who was part of the very first Richmond Sockeyes Junior hockey team in the early 1970s.

Garrison took a turn on the seat of the dunk tank set up on the Oval’s plaza area and invited those to take aim and raise funds for the event.