A business association representing B.C. contractors is asking the BC Supreme Court to stop a referendum on proportional representation from taking place.
Jul 3, 2018 1:42 PM By: Nelson Bennett 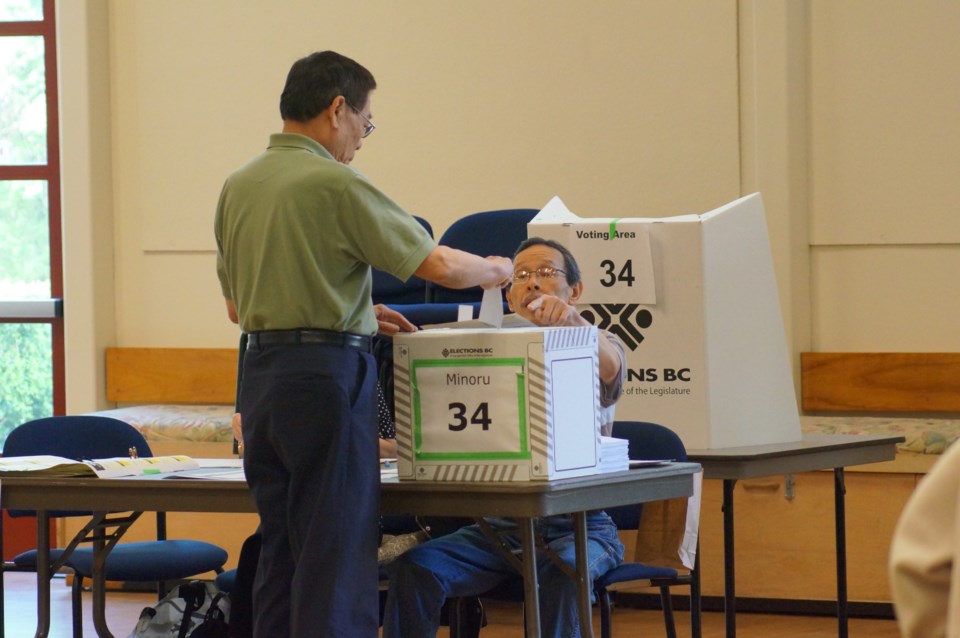 A man casts his ballot in the 2017 provincial election at Minoru Activity Centre on May 9.

A business association representing B.C. contractors is asking the BC Supreme Court to stop a referendum on proportional representation from taking place.

The Independent Contractors and Business Association (ICBA) filed for an injunction with the BC Supreme Court Thursday June 28.

The ICBA is asking the court to quash the provincial Order in Council that established the Electoral Reform Referendum 2018 Referendum on the basis that it violates sections of the Canadian Charter of Rights and Freedoms.

“We’ve got a process that’s been rushed, the questions are confusing and there isn’t time to have a substantive debate,” said ICBA president Chris Gardner.

The referendum, which will be held in the form of a mail-in ballot from October 22 and November 30, could change B.C.’s voting system in a fundamental way, if 50% of voters plus one vote in favour of changing the current voting system from first-past-the-post to some form of proportional representation.

The referendum would ask two questions. The first is whether voters wish to keep the current voting system or move to proportional representation.

The second question would be which form of proportional representation voters prefer.

Three options are given, two of which have never been implanted anywhere: Dual Member Proportional and Rural-Urban Proportional Representation.

Whereas voters knew what the electoral map would look like when they voted on a Single Transferable Vote (STV) in 2009, voters are now being asked to select a system without knowing how it will redraw electoral boundaries, the ICBA argues. Those boundaries would only be determined after one of three proportional representation systems is chosen.

“By adopting this process and asking these questions, British Columbians are left with a confusing choice,” the ICBA argues in its application to the court. “They are being asked to vote on whether to replace the current voting system with a proportional representation system that has not been clearly or sufficiently defined.”

The referendum process has been criticized for being rushed and stacked in favour of proportional representation.

One of the concerns is that, unlike previous referendums in B.C. on proportional representation, which put the threshold at 60%, the one that will be voted on in November would require only 50% plus one vote to pass. Since the referendum is not being held in conjunction with a general election, there could be a low voter response.

The combination of a low threshold and a low voter turnout could mean that B.C.’s system of government could be fundamentally changed by a small percentage of eligible voters, the ICBA argues.

While the proportional representation referendum is opposed by the BC Liberals, it’s also opposed by two high-profile New Democrats – Bill Tieleman, a long-time NDP strategist, and Ujjal Dosanjh, a former B.C. NDP premier and attorney general.

Tieleman, who is founder of Vote No To Pro Rep, said the way the vote is being set up, “a fraction of a fraction” of the electorate could change B.C.’s electoral system.

He is urging people to vote against proportional representation on the first question and not vote on the second question because they won’t even really know what they are voting for.

“Not one B.C. voter will know before they vote what their riding would be, how many MLAs would be in that riding or how the system would operate, and that’s just wrong,” he said.

Proponents of proportional representation argue that it is a more representative system, because the number of MLAs elected would be more reflective of the popular vote.

Under such a system, the BC Green Party would be the biggest beneficiary. An analysis done by Business in Vancouver shows that, under proportional representation, the Greens would have won 15 seats, at the expense of both the NDP and Liberals.

Asked why a business organization is leading the legal fight against proportional representation, Gardner said his organization fears it would be bad for the B.C. economy.

He points to Germany as an example of what can happen under proportional representation. Germany was without a government for six months, following the last election. It took that long for the various parties to agree to a coalition government.

“We think that a strong stable government, a majority government – whether it’s from the left or the right – is fundamentally important to our economic prosperity, our long-term economic growth," Gardner said.

“All of the big projects and initiatives that have defined British Columbia have been the result of a government which has a majority putting a vision in front of British Columbians and pursuing those goals.

The ICBA argues that at least one of the systems up for a vote would create a kind of two-tier system, with rural ridings given a different weight. ICBA argues that that would be a violation of the equality of voting guaranteed under the Charter of Rights.