China’s new national security law affects not just people in Hong Kong, but everyone – including Canadians – according to Richmond-based activist Bill Chu.
Jul 7, 2020 11:58 AM By: Kirsten Clarke 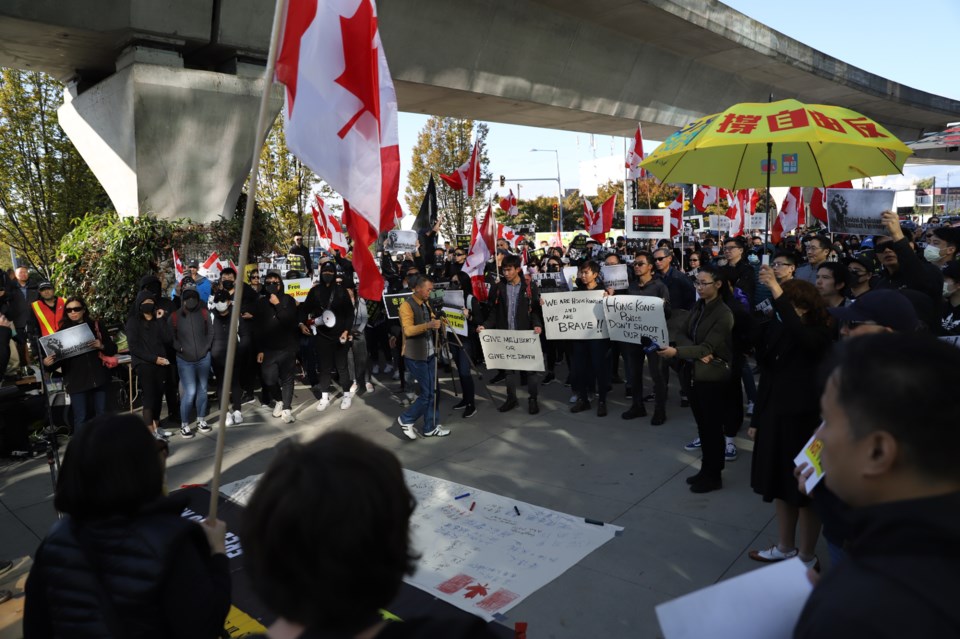 China’s new national security law affects not just people in Hong Kong, but everyone – including Canadians – according to Richmond-based activist Bill Chu.

Chu is a member of, and spokesperson for, the Group of Concerned Chinese-Canadians, who recently issued a joint statement in response to China passing its new national security law in Hong Kong.

“While the world is so busy fighting COVID-19, (China) secretly and quietly introduced this law, that infringes on human rights, not just local Hong Kong people, but people like yourself and me, and that’s totally unacceptable,” said Chu.

The new law – introduced last week by mainland China’s parliament and added to Hong Kong’s mini-constitution – can apply to anyone regardless of where the “offense” occurs or who commits it – be it a permanent resident of Canada, Hong Kong or anywhere else.

Last year, pro-Hong Kong and pro-China supporters clashed at Aberdeen Canada Line Station, where a Lennon Wall had been set up in support of the Hong Kong protests.

But the pro-Hong Kong supporters at those Richmond events could be at risk under the new security law, which utilizes broad and vague wording, according to Chu.

“It should be no surprise that (China is) using broad and unclear terms like ‘undermining’ as in (Article 22),” he said.

“The intent (of the law) is to cast a big net so as to incriminate or threaten to incriminate not just international students, but anyone in Richmond and beyond.”

Because Canada does not have anti-foreign influence laws like Australia, he added, “it is easy for (China) to indirectly monitor people or institutions here.”

In its statement, the group says that the Chinese government argues that national security is a “greater priority” than maintaining the ‘one country, two systems’ formula, “and since democratic countries also have national security laws, they don’t have the right to interfere in China’s internal need for the same.”

However, it’s a false comparison, said Chu, because the new Chinese law defines subversion as things such as freedom of expression or holding rallies and peaceful protests to criticise the government.

For example, the Hong Kong government issued a statement Thursday saying that the slogan “Liberate Hong Kong, revolution of our time,” widely used during protests, is now illegal under the new security law as it has separatist connotations.

Already, some independent media outlets in Hong Kong – which use YouTube or other social media platforms to share their observations on the situation in the region – are shutting down because of the law.

“They realize that this is going to impact them with a heavy cost, meaning that they are exposing themselves to arrest, secret trial without jury and indefinite imprisonment,” said Chu.

China, said Chu, is simply working to protect its own political position by supressing any dissent through the new legislation.

“The whole idea of a national security law is a false pretense, meaning that in actual fact all it’s really trying to protect is the security of that one party.”

The “worst part” about the law, said Chu, is its broad scope – applying not just to people in Hong Kong – which can be seen in the wording of, for example, Article 38.

That article states that the law shall apply to offences committed against Hong Kong from outside the region, by people who are not permanent residents of the region.

“The worst part about (the law) is, it extends its scope to people outside of Hong Kong and China,” said Chu. “If you look at the wording in Article 38, it includes people like you, yourself…by us having this conversation, you are as guilty as myself in terms of their definition of subversion.

The new security law, according to the group, also contravenes the 1984 Sino-British Joint Declaration – a legally-binding treaty registered with the United Nations, which set out how freedoms in Hong Kong would be protected until 2047.

Chu said Canada’s announcement Friday to suspend its extradition treaty with Hong Kong, in light of the new law, is a good step, but more needs to be done.

“It’s a good move because, in light of the national security law, the last thing you want is Canadians here being extradited to Hong Kong, and then from Hong Kong, they would be taken to China. They would end up like the two Michaels.”

The federal government also announced that it will no longer permit the export of military equipment to Kong Kong, and would be treating exports of sensitive goods to the region in the same way as those headed to China.

The Group of Concerned Chinese-Canadians is calling for Canada to develop a “comprehensive strategic policy towards China.”

For example, Australia passed legislation in 2018 that targets foreign interference in politics and other domestic affairs, as well as espionage. And in June, the country announced it would be revamping its foreign investment laws.

In its statement, the group also said it would like the Canadian government to extend assistance – including asylum – to Hong Kong pro-democracy activists; take “strong actions” to repatriate the two Michaels without engaging in hostage diplomacy; and take “punitive actions against the Chinese and Hong Kong government officials…who have committed human rights abuses.”