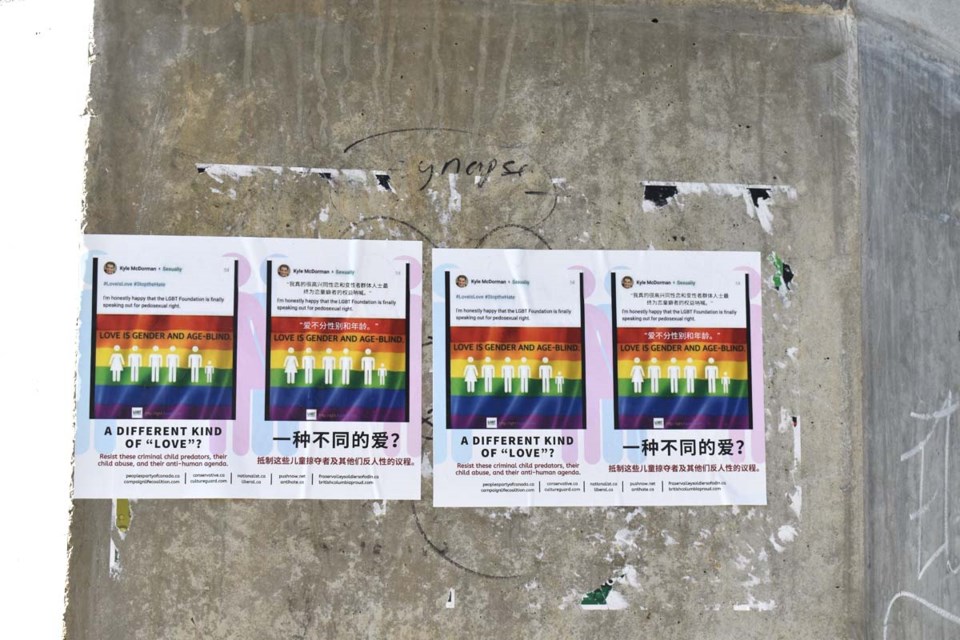 Anti-LGBTQ posters were taken down by the City of Richmond and TransLink.Nono Shen

Posters, in English and Chinese, warning people about so called “pedosexual right” — sex between adults and minors — have been plastered in public places around Richmond, including the rainbow crosswalk on Minoru Boulevard and Blair elementary.

The posters include a screenshot of a social media post as well as a rainbow and icons of adults and a child; at the bottom, the message reads: “A different kind of ‘love’? Resist these criminal child predators, their child abuse, and their anti-human agenda.”

The poster implies that accepting gender diversity would lead to pedophilia. Equating homosexuality with pedophilia is a common tactic on the part of anti-LGBTQ groups, despite the fact that the vast majority of sexual assaults on children are perpetrated by men on girls at a ratio of 2:1, according to the US National Institute of Health. Moreover, it is widely accepted in the medical community that pedophilia is a disorder that has nothing to do with homo- or heterosexual orientation.

The posters were noticed on Friday around the entrance to the public library and along the recently installed rainbow crosswalk. Staff began removing them immediately, according to city spokesperson Clay Adams.

“The posters have been glued on, which makes them difficult, time consuming and costly to remove,” Adams said, adding the city is “disappointed” on the public vandalism.

Monday morning, there were posters still up on the Canada Line support pillars at the Lansdowne Station, but, according to a TransLink spokesperson, they were removed by the afternoon as the transit authority doesn’t permit unauthorized posters on their property.

Richmond Mayor Malcolm Brodie called the posters “the height of ignorance” and a distortion of the issues brought out during the consultation of the painting of the rainbow crosswalk.

“That crosswalk is an effort to show a community that has not been included oftentimes, and has been the object of discrimination over the years, to show them that we include everybody,” Brodie said.

Brodie wants the crosswalk to show that Richmond is an “inclusive, engaged and understanding community.”

“With one exception,” he added “city council was steadfast in saying this is something we wanted to do, to show support and send a message of inclusivity.”

The poster plastered at Blair elementary this past weekend was removed by someone in the community, according to Richmond School District spokesperson David Sadler.

“The messaging printed on the posters is not in any way consistent with the values of the Richmond School District which prides itself on its inclusive and welcoming approach,” Sadler said.

Staff at the school district believe that learning and working environments that are “inclusive of diversity and equitable in relation to that diversity” are needed to support the highest level of growth and achievement for all members of the community, he added.