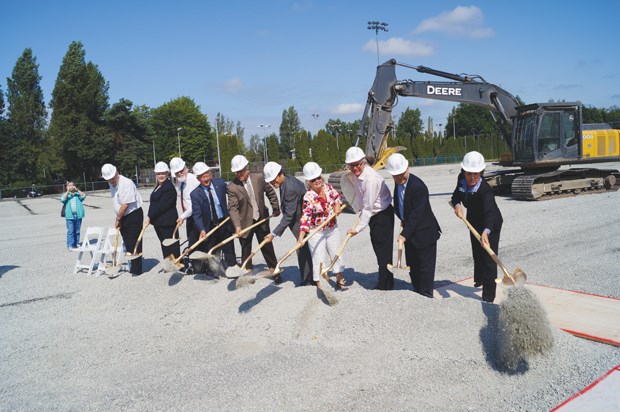 City councillors and other local dignitaries from the community turned over spades for the official ground breaking of the Minoru Park complex that will house a new pool and seniors' centre. Photo by Graeme Wood/Richmond News

Construction of the project, which will replace the existing aquatic facility, seniors’ centre and Minoru Pavilion, is expected to begin next summer with a completion date of June 2017 pinned on the calendar.

Mayor Malcolm Brodie said the need to build a new seniors’ centre — to be officially dubbed the Richmond Older Adults’ Centre — is evident in the growing population of those over the age of 55; in the past 10 years said population has risen from 20 per cent to 25 per cent in the city and in 30 years it could reach roughly 45 per cent, according to census and population trends.

Brodie said the existing 56-year-old aquatics centre sees roughly 500,000 visits per year, but “because it has aged it lacks many of the modern amenities it needs for today and tomorrow.”

Monday evening Brodie and each city councillor attended a general purposes committee meeting to receive a report from staff outlining the guiding principles of the new complex, determined through consultation with stakeholders, which included a citizen-led advisory committee.

Largely at issue was how synergies would work between the seniors and the general public.

Although the lobby will be shared, the seniors’ centre will also have a separate entrance and reception.

The complex will house just one central kitchen, to be used by all parties.

To make the best use of space and equipment, the fitness centre will also be shared by seniors and the general public.

The committee accepted the principles on condition that staff ensure some of the shared multipurpose space be completely separable for the seniors’ facility during certain hours of the day.

Coun. Harold Steves expressed concern about not building a 50-metre pool for competitions in light of the lease at Watermania expiring in 10 years. Staff assured Steves the city would not be left high and dry.

Learning from staff that a 50-metre pool would cost an additional $8 million as well as greater annual operating costs, Coun. Bill McNulty, also expressing a desire for a 50-metre pool, expressed regrets that staff was limited to the $80 million budget.

City staff noted the new aquatics facility should host a greater variety of pools and activities than what currently exists at Minoru. The pools were largely designed with older adults in mind; compared to the existing facility, there will be a cold plunge pool, leisure pool, more hot pools and a five-fold increase in sauna and steam rooms.

The seniors’ centre will house a games room, activity room, fireplace lounge and woodworking shop, among other things.

In addition to change rooms, outdoor athletes should be able to access a first-aid room, public washrooms and a concession stand built into the complex.

The building will be placed on an existing sports field. That field, as well as some tennis courts, will be pushed further north. The baseball diamond will be turned into an all-weather, artificial turf baseball/soccer field and the cricket grounds will also be moved in a bid to make land use at Minoru Park more efficient. The moves contentiously came at the cost of several, mature trees along Gilbert Road, which the city says will be replaced by a one-to-three ratio.

Brodie said there was minimal burden on the taxpayer as the city borrowed about $50 million and dipped into reserves to pay the remaining costs. It is expected casino revenues will pay off the debt.

At the sod-turning ceremony, the chair of the Aquatic Services Board, Ian MacLeod, said he was pleased that construction of the new facility would not interrupt services at the existing pool.

President of the Minoru Place Seniors Society Kathleen Holmes said the 60,000 visitors to her centre will benefit from a more holistic centre.

President of the Richmond Sports Council Jim Lamond said the new artificial turf fields and the “bigger and better” facility should fit the needs of everyone in the community.

The next step in the process will be to have Hughes Condon Marler Architects design the facility. The firm also designed the aquatic centre at Vancouver’s Hillcrest Park and Killarney Community Pool.

Among the goals of the project are financial and social transparency.

Richmond parent pushes for more remote learning
Dec 3, 2020 1:45 PM
Comments
We welcome your feedback and encourage you to share your thoughts. We ask that you be respectful of others and their points of view, refrain from personal attacks and stay on topic. To learn about our commenting policies and how we moderate, please read our Community Guidelines.