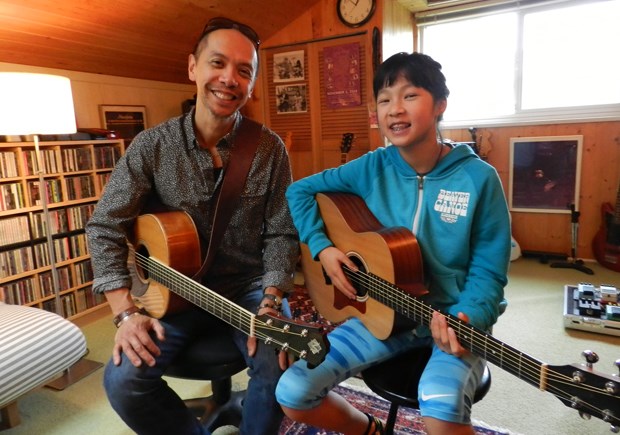 Roland and Emma Nipp will be taking their father-daughter guitar performance to the second annual G Day event today (Oct. 23) at the Creekside Community Centre in Vancouver. For a video of the Richmond duo playing, go online to Richmond-News.com. Photo by Philip Raphael/Richmond News

When Roland and Emma Nipp sit down before an audience and start strumming their guitars, it’s not long before keen ears and eyes in the room take note of who is taking the lead.

The majority of the time, its Emma, a 12-year-old Grade 8 student at McMath secondary, with her father, a guitar instructor, following her.

The “string plucking” order is intentional, as Roland wants to cast the spotlight on his daughter’s talent and achievements that she’s developed since first picking up the instrument six years ago.

The set up is especially fitting when the two perform this Friday at G Day for Girls — an annual event designed to celebrate and empower girls aged 10-12.

“Our goal in participating at G Day is to show that girls can be inspired to pursue their interests and dreams because it’s uncommon to see a girl play a lead guitar at Emma’s age,” Roland said. “We don’t think anything of it because we are just making music.  But it would be nice if there was more of that in the world.”

This is the second time the two have been part of G Day. Last year, an organizer for G Day heard about Roland and Emma’s performances together in community centres and seniors’ residences across the city and invited the pair to be part of the event.

On G Day last October, Emma not only performed with her dad, but she was a participant in the event, which left an impact on her.

“It was nice to see all these girls who cared about themselves and wanted to be there,” she said. “Stereotypes for young girls are very different, so it was good to see them caring about their bodies.”

While there have been many advancements in society towards gender equality, Roland said he feels there is still a way to go.

“From what I do as a living, teaching guitar, there’s far more boys interested than girls in playing the guitar,” he said. “Typically, if you canvassed music schools you’d see more girls enrolled in piano, flute — the pretty instruments.”

Today’s pop culture and how it is presented is responsible for part of that, he added.

“When you see some pop stars today with a girl playing guitar, she is usually politely strumming it to the point that it’s more of a prop. Whereas, I’d actually like to see girls play and be respected as a player, not because it looks good with what they are wearing.”

For Emma, she does see that shift in gender roles with her own group of friends.

“A lot of my friends do like pink,” she said with a smile. “But many also like video games, and playing football and hockey. It’s neat to see that.”

G Day will be held at Creekside Community Centre in Vancouver (1 Athletes Way) adjacent to the 2010 Olympic Athletes Village from 8:45 a.m. to 5 p.m.

Tickets are sold out for this year. But for more information, visit the G Day website at gdayforgirls.com.