TransLink not about to follow Richmond down bus shelter ad path
Mar 23, 2016 9:33 AM By: Graeme Wood 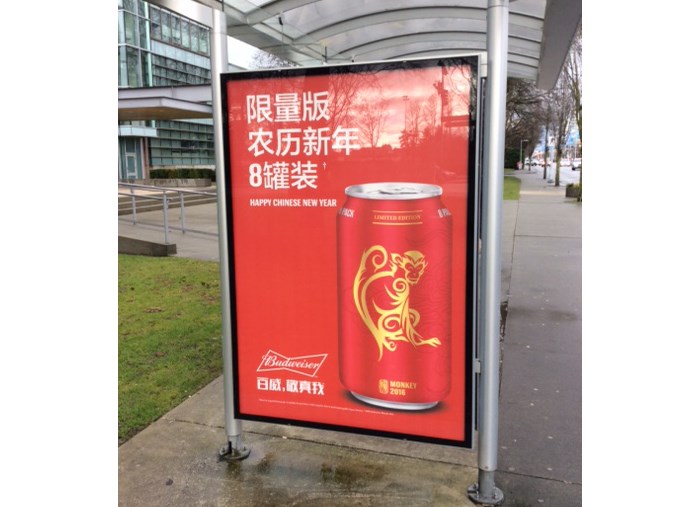 The B.C. Civil Liberties Association says constitutional questions may arise over the City of Richmond’s decision to require some English on city-owned bus shelter ads.

The city has stated its new contract with an advertising company (potentially Pattison Outdoor Advertising) will stipulate there should be bilingual messaging on its ads, found on bus stop benches and shelters.

This is in stark contrast to TransLink’s insistence that it cannot regulate language on its own ads, such as at Canada Line stations and on the back of buses.

TransLink told the News there is no legislation in the province or any municipality to enforce signage or ads in any of Canada’s two official languages, English or French.

Ergo, “TransLink has no authority to deny advertising on that basis. If people want to advertise, as long as it meets our own advertising guidelines, we accept it,” noted TransLink spokesperson Cheryl Ziola.

Those guidelines were heavily influenced by a 2009 Supreme Court of Canada decision that ruled TransLink is a public agency that is subject to an individual’s right to freedom of expression under the Charter of Rights and Freedoms. The decision was made after TransLink had refused to place a political ad on its property and was subsequently taken to court for not doing so.

The city contends it can regulate its own signs and ads, as opposed to enforcing language requirements on private business signs via a bylaw, which it decided not to do last year following public consultation.

“I see this being very akin to the TransLink situation,” stated Josh Paterson, executive director for the B.C. Civil Liberties Association.

TransLink could place language requirements in its advertising policy, however it would be subject to a court challenge, and thus the public transportation agency would need to prove, under Section 1 of the Charter, that there are demonstrably justified reasons to limit freedom of expression.

Similarly, city council was advised that it could create a language bylaw for business signs, however, it was a matter of whether or not it could be proved that the English requirements were a reasonable limitation on the Charter (specifically, whether Chinese-only signs are harmful to community harmony).

Paterson said the city could face a similar type of challenge regarding its bus shelter ads and thus may need to prove its English requirements are justified limits on the Charter.

The city’s decision was, however, welcomed by community activist Kerry Starchuk, who is questioning why TransLink won’t follow the City of Richmond’s suit.

Starchuk said she and many other Richmond residents are frustrated by the growing prevalence of Chinese-only or predominantly-Chinese advertisements at public transit stops.

“I pay property taxes to fund TransLink and want a refund. I do not support signage that is not inclusive to all cultures,” said Starchuk, via an email to the Richmond News.

But Paterson said it was his association’s opinion that English was not under threat in the province or in Richmond.

“I’m not sure anyone is making a credible argument that English as a language of commerce is under threat in B.C,” said Paterson, who questioned how the city could demonstrate language requirements at city-owned bus stops are justified limitations to the Charter.

“English speakers aren’t being shut out of these products,” added Paterson.

“These kinds of restrictions aren’t justified and we think, in our legal opinion, that they’re constitutionally vulnerable.

“I’m not sure what purpose (the city) could point to and say, ‘Gosh, that Budweiser ad has got to be in English.’ What is the public purpose there?” asked Paterson, who noted English requirements for public signs for health and safety or directions would likely demonstrate a justified limitation, if they were ever challenged.