A grant allowed an Indigenous artist to help Mitchell elementary students learn about a nearby slough, prompting them to take action.
Mar 24, 2021 7:00 AM By: Maria Rantanen 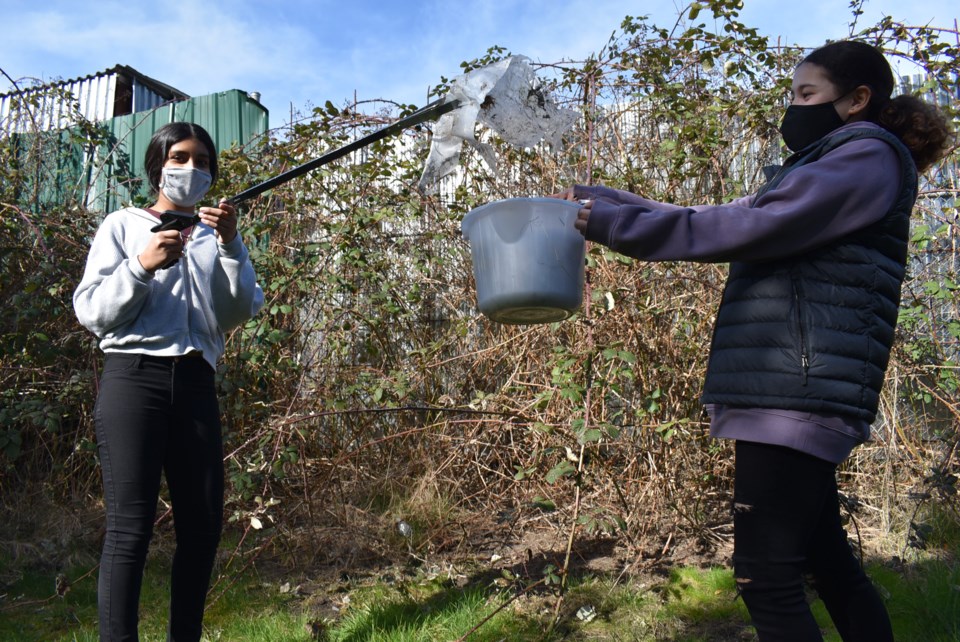 Mitchell elementary students collected four buckets of garbage at a Richmond slough every day for about five weeks.Maria Rantanen/News

An elementary school project focused on cleaning up a local slough cuts across a spectrum of subjects.

But, most importantly, it’s got Chelsea Murray’s Grade 6/7 students excited about looking at the inter-connectedness of the world and the environment.

For about five weeks, the teacher and students went out to pick up garbage at Bath Slough, and almost every day they came back with four four-litre buckets full of garbage.

“My students were just horrified,” Murray said, adding no wonder the area is avoided.

There were some odd items like a can full of cigarette butts and a shopping cart.

With a grant from Vancouver Biennale School Art project, which allowed for an Indigenous artist to work with the students pondering the question “What is our place in this place?” the students at Mitchell elementary are cleaning up the waterway that run between their school’s neighbourhood and the industrial area that includes Ikea.

Murray thinks sloughs are so easily neglected because they seem like big ditches, but, in fact, waterways are all connected.

T’uy’t’tanat-Cease Wyss (her traditional name is pronounced "Toyts- ta-not"), the Indigenous artist that worked with the class, took them on listening walks to the slough at the beginning of their project, and they were shocked to notice there were hardly any natural sounds – 90 per cent of what they heard were man-made, like airplanes and metallics sounds from the industrial area.

“That was really shocking for the students,” Murray said. “We’re in what looks like a natural space, and there is almost no aliveness when it comes to animals and wildlife.”

The fact that everything is connected in the world ties into the First People’s principles of learning “in a really authentic, meaningful way that’s also respectful.”

“Everything that we do, whether it’s positive or negative, has a ripple effect in our community,” Murray said.

She credits her students for getting “really passionate” about saving Bath Slough.

“This whole project is from them and they’re moving that into their community,” Murray said. “Cease and I have really just been facilitators – allowing them to go and steering them in the right direction so we can make it happen.”

Furthermore, the students have learned “that their voices matter… they can make a tangible change in their community” despite being elementary students, Murray said.

They have created a documentary of their project and have written to mayor and council asking for help to further clean up the slough and to get some benches, garbage cans and seeds of native plants.

“I think that the lived experience, the hands-on experience for the students has been just so empowering, to see the impact that they are able to make,” Murray said.

Not only have they written the story of their “place,” they have dipped into the sciences talking about biodiversity, evolution and natural selection – all connected to the slough.

The project touches on all the “curriculum competencies” – those large areas teachers need to focus on based on new curriculum guidelines, but “in a really meaningful way,” Murray explained.

The vision the students have of the slough is to support its flora and fauna – including a pollinator garden.