Coun. Alexa Loo the only councillor to disagree with call to initiate new review of expanded pipeline
May 10, 2016 3:47 PM By: Graeme Wood 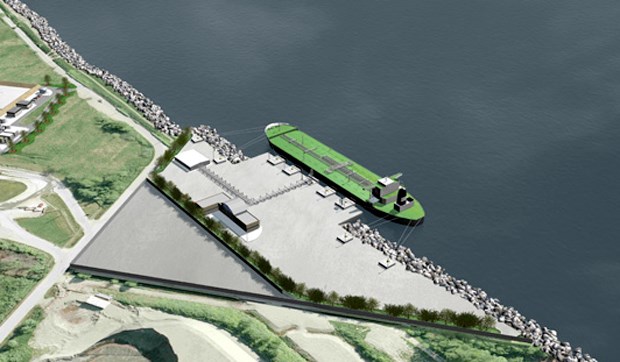 The controversial plan has to barge jet fuel up the south arm of the Fraser River and then off-load at a facility, such as the one pictured, has been given an environmental certificate by the B.C. government.

Richmond city council is calling on the federal and provincial governments to undertake a new environmental assessment of a jet fuel storage facility and pipeline that is now partly under construction near Riverport.

Council voted 8-1 in favour of reassessing a proposed amendment to increase the size of the pipeline, citing concerns that the proponent, the Vancouver Airport Fuel Facilities Corporation (VAFFC) — a consortium of airlines operating out of Vancouver International Airport — is potentially tripling fuel storage capacity to sell cheaper overseas product to nearby airports.

The potential for more jet fuel to flow from the planned marine terminal on the Fraser River and through the pipeline “would create a facility capable of delivering product far in excess of YVR’s current demand,” noted a report from Richmond’s engineering department.

“What’s happening here is a complete change from the previous environmental assessment and we want this redone,” said Mayor Malcolm Brodie at a council meeting on Monday.

Council will also ask the federal government to consider all the alternatives for fuel delivery, in a new assessment — something that was not done last time as a result of changes to environmental laws in 2012, noted Brodie, who suggested the marine terminal should be built along the north arm of the river, in more open waters.

As well, council is asking for a stipulation that jet fuel not be sold outside of YVR, as doing so would be outside the scope of the approved environmental certificate granted by the provincial government in 2013 under a “harmonized” review process that has garnered criticism from local residents and environmentalists concerned about the estuary.

“We’re adding bureaucracy and we’re adding an extra step. And [VAFFC is] still going to come back with the same answer. So unless we come up with something really new on why it really shouldn’t be here, we’re just creating more work and spending more tax dollars,” said Loo, who suggested there was hypocrisy on council as she noted, “it seems to me everyone on council has flown out of here in the last 30 days, out of YVR.”

Loo also pointed out there’s already a jet fuel pipeline running from Burnaby, through Richmond, and it has been a “safe option.”

Furthermore, she noted VAFFC’s contention that an increase in pipeline diameter will decrease pressure and thus increase safety.

Loo questioned the city’s assertion that fuel could be sold.

“How far away would they be shipping this fuel?” she asked.

Coun. Carol Day said she couldn’t “disagree more” with Loo and that council’s requests were about “due diligence” to understand what is “going on behind the scenes” that precipitated the VAFFC amendment proposal.

Coun. Harold Steves said it seemed logical that VAFFC would want a bigger pipeline if it can get bigger, deep-draft ships to the marine terminal with the George Massey Tunnel gone.

“It’s conjecture at this time as to what exactly they are doing because they’re not telling us,” said Steves.

Brodie said the project will reshape the “fundamental” vision of south Richmond from an agricultural area to one of industry (although the terminal land is already zoned for industrial use).

VAFFC noted in its amendment application that a 50mm increase in diameter to the 300mm pipeline “would not result in pumping more fuel to the airport or change the scope of the project.”

Rather, the increase is necessary for operational efficiency.

VAFFC also noted a bigger pipeline would reduce greenhouse gas emissions because less energy from the pumping system would be used.

An open house on the pipeline amendment, held by VAFFC, is this Saturday at the Executive Airport Plaza, from 1-5 p.m. Or see VancouverAirportfuel.ca.