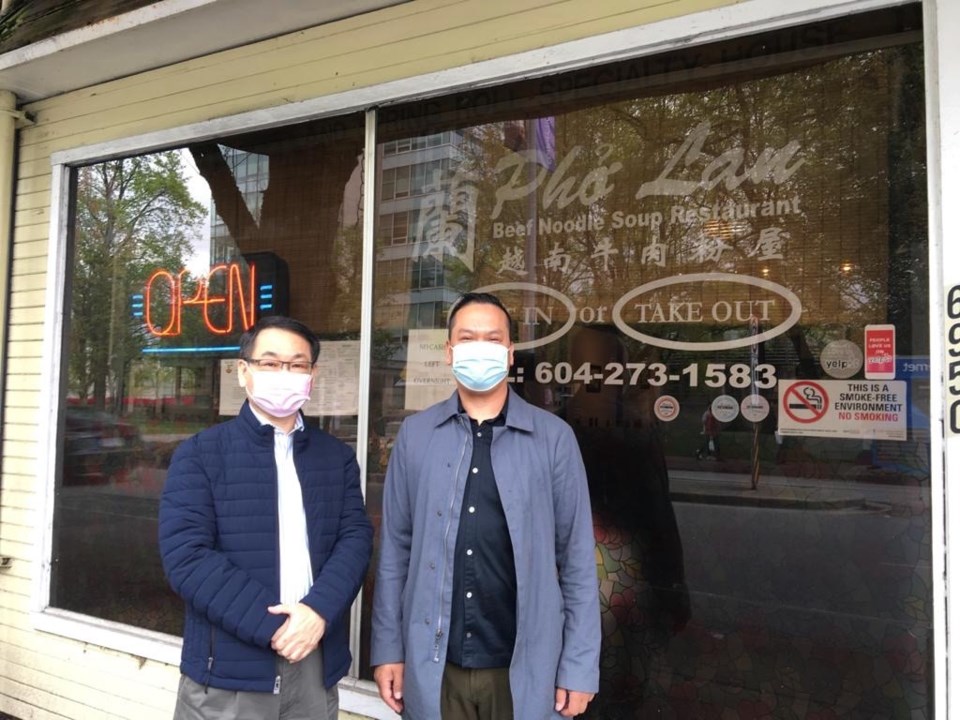 The Richmond News was contacted Tuesday by Ho’s campaign communications person, Grant Hsu, about the press conference, saying Ho would be there for an announcement.

The Richmond Community Coalition (RCC) called a press conference to make what sounded like an election campaign promise but, in the end, fellow RCC member Coun. Chak Au made the announcement, promising $100 stimulus voucher to all Richmond households.

The goal of the proposal is to boost the local economy by encouraging people to spend money, explained Au at the press conference.

RCC said it would cost the city $7.8 million to give all 78,000 households in Richmond a $100 voucher to spend at local businesses within three months.

"We are proposing an unconventional approach to support local businesses. Yes, the local government usually doesn't do that,” Au said at the press conference. “But we are in a very special time, and we should think outside the box and be creative. As a city, we can afford to do something bigger and bring better results for both the economy and citizens."

The BC NDP also promised – and delivered - stimulus cheques of up to $1,000 before last fall’s provincial election, but this was criticized as an election ploy.

"Other countries have set great examples for us to prove that the spending voucher concept could work well. Meanwhile, we would love to hear more feedback from Richmondites to move forward with the proposal and bring it to the council as soon as possible," said Ho.

Au said the city has $1.25 billion in reserves that could fund the stimulus vouchers, and the city even received $9 million from the provincial government for COVID-19 response.

Mayor thinks the proposal is problematic

However, Richmond Mayor Malcolm Brodie thinks this proposal is problematic and some figures are being used inaccurately.

According to Brodie, from a legal perspective, the city isn’t allowed to designate a household to give a $100 voucher and use the reserve in that way since there are many spending restrictions regarding the reserve funds.

The reserves – about $1.3 billion – are “consolidated” from many organizations affiliated with the city, Brodie explained, for example, the Oval and the library and others.

There are also many “reserve accounts” with money earmarked for specific purposes, Brodie said.

“If you have money to buy parks, that’s all you can use it for. So there are many kinds of different ways funds are earmarked,” he added.

Regarding the $9 million COVID-19 funding from the province, Brodie said the provincial government didn’t give the money to the city as a gift. Instead, the city needs to use the money for certain things, such as extra expenses due to COVID-19, for example, to make up for lost revenue because facilities are shut down or emergency costs.

“You have to use it to cover the cost you have lost due to the COVID-19. You can’t just say this is a gift and give it out.”

"We have committed to rebuilding the Phoenix Gill Net Loft project for $19.44 million. We could have delayed the project to save money for this recovery plan."

Council approved the rebuilding of the Phoenix loft last year and it is currently underway.

Local restaurant owner Michael Kah, whose family members have been running a pho restaurant across the city hall for 27 years, showed his endorsement for the proposal at Friday's press conference.

"With COVID-19, things are really challenging. There were days I don't know how long the restaurant will last, but we try to stay positive with the federal and provincial government support. It's heartening to see leaders to suggest this project. It will stimulate spending," said Kah.