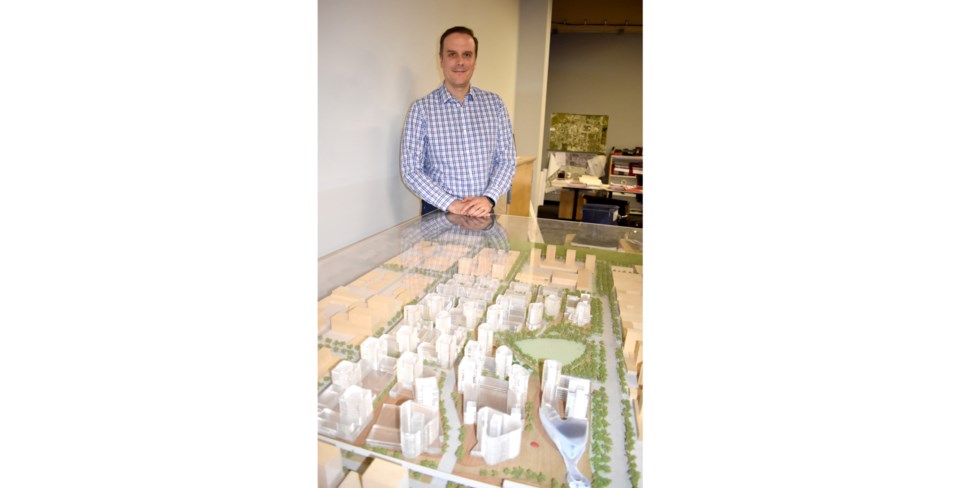 The Joni Mitchell lyrics “they paved paradise and put up a parking lot” could have been written about Lansdowne, which morphed from grasslands to farmland to concrete jungle over a few decades as the automobile and its oil-dependent economy pervaded Lulu Island.

But a seismic shift is happening in the heart of downtown Richmond as the current owner of Lansdowne Shopping Centre, Vanprop, plans to transform the quintessential suburban mall into a home for thousands of people surrounded by shops, restaurants, public amenities and greenspace.

The 50-acre parcel used to be part of the Western Lulu Island Grasslands where thousands of First Nations foraged for food in the summer. In the early part of the 20th century, it was transformed into one of the continent’s premier racetracks with a busy stop on the Inter-Urban tram that ran from Vancouver to Steveston. And in the 1970s, it became a shopping mall, a hub of consumer culture.

The mall’s original name was Lansdowne Park Mall, but not much green is left at the site with its paved parking stalls surrounding the concrete shopping centre building.

The next iteration of this piece of real estate, as envisioned by Vanprop and Richmond’s Official Community Plan (OCP), is for it to become a densely built, urbane community with a pedestrian-oriented streetscape.

Lansdowne Village in the OCP, the document that guides development in the city, is designed as a tight urban core bounded by Westminster Highway, Garden City Road, Alderbridge Way, and Gilbert Road, encompassing a strip toward the river that is currently occupied by warehouses and light industrial buildings.

From grasslands to racetrack

According to UBC geographer Margaret North, the Lansdowne area was part of the larger Western Lulu Island Grasslands where the Halkomelem-speaking First Nations, the Coast Salish, would gather blackberries, horsetails, cinquefoil roots (silverweed), clover and other plants in the area. They would also hunt deer and beaver as well as seals and sea lions and fish for eulachon and sturgeon.

The area was slowly settled by farmers in the late 1800s and early 1900s. Then in 1923, an 81-acre parcel was purchased on behalf of the West Coast Jockey Club to build the Lansdowne Park Race Track from a local farmer, J. Hemphfield.

The one-mile track opened on July 9, 1924 and the first race was named the “The Haggis,” a testament to the many Scottish immigrants in the area. The grandstand at the racetrack seated 4,500 spectators and, later, another 1,000 seats were added. There were 60 sellers and 60 cashiers in the stands and the track included a clubhouse and 12 saddling stalls. Originally, there were 30 horse stalls, but over the years that increased to 360.

Earle A. Lewis described the track in Turf & Paddock as “one of the finest racing strips on the continent,” pointing out at the time of writing, June 1950, that three Canadian track records were held at Lansdowne.

The track finally shut down and the tram stopped running in the late 1950s. Richmond, while still fairly rural area at this time, was looking to the future, which included a new shopping experience with cars as the primary mode of transportation - it’s no surprise that the current zoning for Lansdowne is “auto-oriented commercial.”

When Lansdowne Park Shopping Centre was built, it covered the western half of the racetrack – the eastern half was left for future development. A 1982 document shows a proposal for this eastern half of the racetrack that included a park with an amphitheatre, a lake, plazas, trees and a curling rink. That plan never materialized and the lot now houses Kwantlen Polytechnic as well as some residential towers.

A brochure promoting Lansdowne Park Shopping Centre states that the malls of a regional shopping centre are “idealized streets” with no traffic hazards and the right climate, “the perfect pedestrian environment.”

“Points of interest, changes of direction, light and shade, and interior landscape all contribute to the idealized, urban scene created,” the brochure states.

In 1984, the property was bought by Vanprop.

Vanprop’s vision for the future

The vision for Lansdowne is to complement retail already on No. 3 Road, and bring some “cosmopolitan urbanity” to the city centre, explained Jesse Galicz, vice-president of development for Vanprop.

Public amenities that are envisioned for the project include a large park, a civic plaza, an events space, public art, a linear park that connects to the Oval and a 53,000-square-foot amenity building.

“This is a project we want to get right,” Galicz said. “We’re committed to getting right, which means it’s going to be developed methodically over time with care and attention to make sure that we do get it right.”

That includes getting the right type of housing to make it a complete, inclusive community, he added. “We think it’s a special place in Richmond and we want to elevate it back to that special place,” Galicz said. “I think with the amount of public amenities, and the services that come with a project like this, it’s going to be a destination for people in Richmond to come to, to spend their Saturday nights or Sunday afternoons – and it’s going to be an exciting place to live because you’ll have everything at your fingertips.”

More than two years ago, Richmond council endorsed Vanprop’s master land-use plan and implementation strategy, which lays out how the project could unfold over the next 15 to 20 years.

The project has been delayed because of the COVID-19 pandemic, but city staff are aiming to have it on the agenda for February’s planning meeting.

Galicz said the company is “excited and hopeful” that this high-level plan is moving forward, although they are still waiting for confirmation from the city that it will be on February’s agenda.

If council endorses their OCP amendments, Vanprop can start rezoning the property section by section, incrementally building out the site with the eventual demolition of the current shopping mall.

Galicz said the first phase will most likely comprise about 1,500 residential units in mid-level and high-rise buildings in the northeast corner – currently a collection of parking stalls – which they hope to start marketing in 2022.

The next phase is planned as mixed-use with commercial, office towers and, finally, the pedestrian retail high street with cafés, retail stores, a grocery store and other services.

The vision of Vanprop is to reinvigorate the Lansdowne area and make it a destination, Galicz said, compared to its current use as an underused parking lot and inefficient 1970s mall.

“Lansdowne (mall) was a destination when it originally opened, it was an attraction in the region,” Galicz said. “People would come from various neighbouring municipalities to do their Sunday shopping.” He hopes the next phase will see it as a transit- and pedestrian-oriented destination.