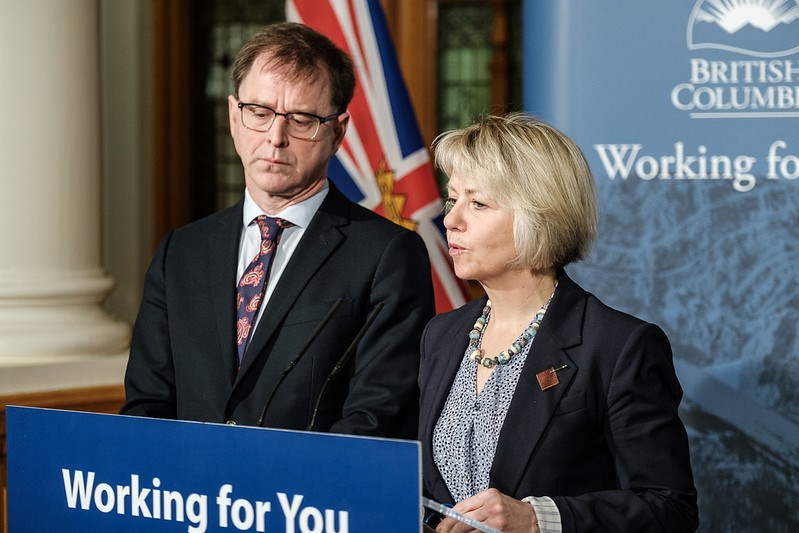 An eighth case of coronavirus, known as COVID-19, has been diagnosed in B.C. in the Vancouver Coastal Health region.

The patient is a woman in her 60s from Tehran, Iran who is visiting family who live in the VCH region, which stretches from Richmond to Vancouver, and north to Sea-to-Sky and Bella Coola.

The woman, who began experiencing symptoms a few days after she arrived in the province this week, is at home in isolation along with her family members, said Henry.

Her infection is "relatively mild," Henry said, and the woman had a limited number of contacts.

"The small number (of contacts) are all in isolation in the same household and we're monitoring them carefully," she said.

Henry said B.C.'s first four cases have "fully recovered" and are out of isolation. Most of their contacts are also now out of isolation following their 14 day quarantine, and none of them developed any symptoms.

The province's other cases are in "stable condition" and remain in isolation at home.

Case six, announced Feb. 20, is a woman in her 30s who travelled to Iran, returning to Vancouver Feb. 14 on a flight from Montreal. Case seven, which was confirmed Monday, is a close contact of case six's.

Both patients are at home in isolation in the Fraser Health region, which stretches from Delta in the west, to Hope in the east and White Rock in the south.

Case seven had shown symptoms of the illness prior to case six’s diagnosis, said Henry on Monday. While case six had a number of close contacts, all of whom health authorities have been in contact with, no one else is showing symptoms.

Three cases in Ontario and one in Quebec, all reported this week, are also connected to Iran.

Iran has reported 593 cases and 43 deaths as of Saturday. Over 200 new cases were announced Saturday.

"The situation in Iran is one that's very concerning and we're certainly watching that carefully," said Henry.

"We know that we have a large Persian community here in Canada and here in B.C. that are also watching that very carefully."

The U.S. announced its first death from COVID-19 Saturday, in Washington state.

While health officials are closely monitoring the spread of the coronavirus in the U.S. and globally, B.C. is still focusing on containing the coronavirus, said Henry.

"A pandemic would mean widespread transmission of this in communities around the world, including here in Canada," she said. "But we are very much focusing on containment and delaying this as much as possible."

However, she said, the province is also preparing the health system in the case of a pandemic, such as ensuring B.C. has the medical supplies and equipment it needs, and coordinating with federal and other provincial officials across the country.

Saturday's announcement is the third case to be reported in Canada within the last 24 hours.

Both of those cases are in Toronto.

In total, Canada now has 17 confirmed or presumptive cases of COVID-19. Cases that have tested positive by provincial health authorities are considered presumptive until they are confirmed by the National Microbiology Lab in Winnipeg.

Other cases confirmed in Canada this week include Ontario’s fifth and sixth cases, announced Wednesday and Thursday, a woman who returned from Iran and her husband who then became infected, the first case of human-to-human transmission in that province.

Also on Thursday, Quebec confirmed its first case, a woman in the Montreal area who also travelled to Iran.