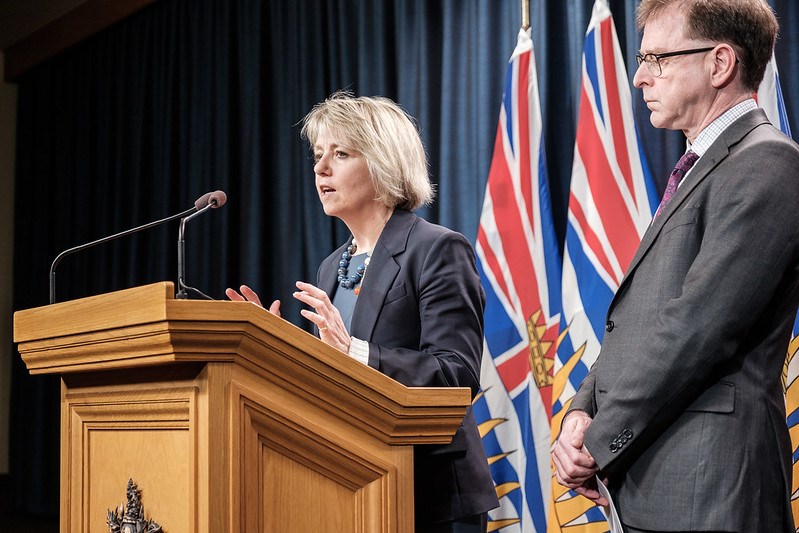 B.C. health officials are advising against all non-essential travel outside of Canada as they announced seven new cases of the coronavirus Thursday.

That includes travel to the US, said health officials.

If anyone chooses travel, said provincial health officer Dr. Bonnie Henry, they will be required to stay home from work and school for 14 days after they return to Canada.

"It is clear that the evolving situation both in the United States and globally is a risk for all of us, and we are strongly advising people not to travel," said Henry.

"We feel that this is the appropriate measure at this time, given the situation that we've been seeing, given the importation of travel-related cases and the challenges that we have in monitoring them."

It's the "responsibility we owe to our fellow citizens," added B.C. Health Minister Adrian Dix.

The province is also asking event organizers to cancel all events with more than 250 people, said Henry.

"We are directing all event organizers in British Columbia that they will be required to cancel any gatherings larger than 250 people," she said.

Over groups of that size, said Henry, it can be "really challenging" to put in place the social distancing measures that help prevent the transmission of respiratory infections such as COVID-19.

However, unlike other provinces, B.C. is not closing schools, said Henry.

"(Schools) are a place where young people can be kept safe from a lot of things they can learn about social distancing," she said.

"We know that the impacts of closing schools, particularly abruptly, can cause a lot of societal disruptions and economic impact. So we want to be doing that in a measured way."

This is the second care home on the North Shore to report COVID-19 cases.

The new patients include a resident of the care home, a man in his 90s, as well as two health care workers there, a man and a woman in their 40s, who are also connected to the Lynn Valley Care Centre.

Three of Thursday's cases contracted the illness during travel. One, a man in his 40s, recently returned from travel in London and Scotland, while a couple — a man and a woman in their 40s — were on a cruise on the Nile in Egypt. They all live in the Vancouver Coastal Health (VCH) region.

"So that again increases the number of people in our province who've been associated with travel to Egypt," said Henry.

There is also a new community case, said Henry, a man in his 50s who is now at home in isolation in the VCH region.

Health officials haven't yet determined where he contracted COVID-19, she said.

Henry added that one of B.C.’s patients, a woman in her 60s who was on the Grand Princess cruise ship in February, remains in hospital in the Fraser Health region in stable condition.