Clutter, clutter everywhere - but not in Richmond? 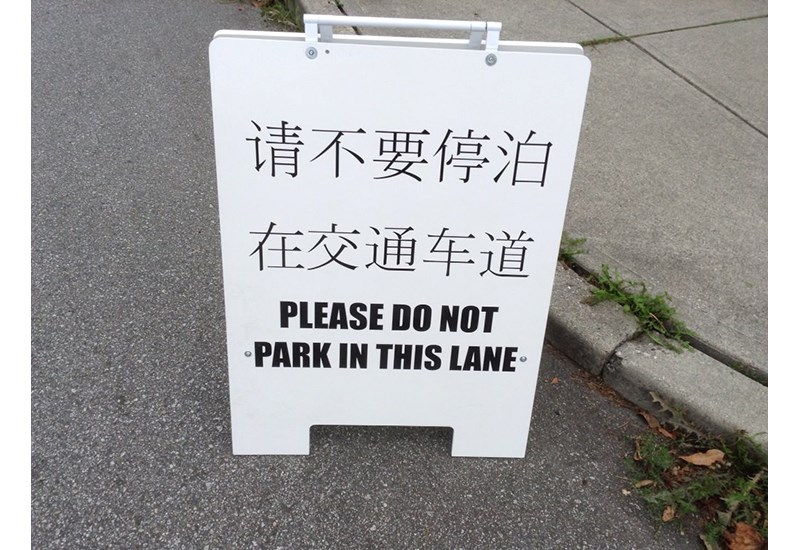 Chinese-English signs on public property, like here, in front of a school, have been criticized for being exclusionary and fostering a lack of integration for the rapidly expanding immigrant community in Richmond, most of whom come from China.

The City of Richmond is tabling recommendations for a new business sign bylaw to lessen the impact of cluttered advertisements on windows and sidewalks.

The “clutter bylaw,” as it has been referred to by many, is the product of city council’s direction to lessen the impact of foreign language signs and unregulated ads, without expressly implementing language provisions.

The clutter bylaw is to address “de-cluttering without a language provision and regulatory gaps in order to modernize and strengthen the bylaw requirements,” according to a staff report to council, which requested the changes after it decided not to create a bylaw that stipulates business signs must be in English or French.

Earlier this year, council approved English requirements (50 per cent) for transit stop advertisements on city-owned property. On the whole, it has, in the past, made the distinction that it will not do the same for signs on private properties.

However, community activist Kerry Starchuk said the clutter bylaw is not addressing the main concerns.

“This isn’t what we, the community, asked for. We asked for English or French on signs,” said Starchuk, who contends the city should be more proactive in promoting a common language, namely English, so citizens can understand one another.

The bylaw proposal will go to public consultation this month, costing $40,000.

The city has spent about $70,000 on a Cantonese-speaking sign inspector this year. Richmond director of administration and compliance Cecilia Achiam’s report to council stated the inspector has been “indispensable” by providing real-time translations for business owners.

Complaints from residents about unregulated signage have gone beyond those related to foreign language, noted Achiam.

Under the bylaw proposals, inflatable signs, billboards, flag signs, signs attached to vehicles and portable signs will not be permitted. Sandwich board signs will also be banned unless for opening promotions.

The bylaw proposes to allow no more than 50 per cent of a window covered in advertisements. Anything more than 25 per cent coverage will require a special permit. Permits will be required for banners and free-standing (such as real estate) signs, as well. The bylaw also proposes to limit the size of linear storefront signs.

The bylaw will be enforced on a complaint basis and business owners may face fines for violations.

It has yet to be determined if or how existing signs will be grandfathered into the new bylaw, noted Achiam.

One may email Achiam’s office at signsconsult@richmond.ca to file complaints and/or comments.