The City of Richmond is now fully engaged in dealing with the realities of a planned jet fuel terminal on the South Arm of the Fraser River, near Riverport.
Sep 9, 2016 11:03 AM By: Graeme Wood 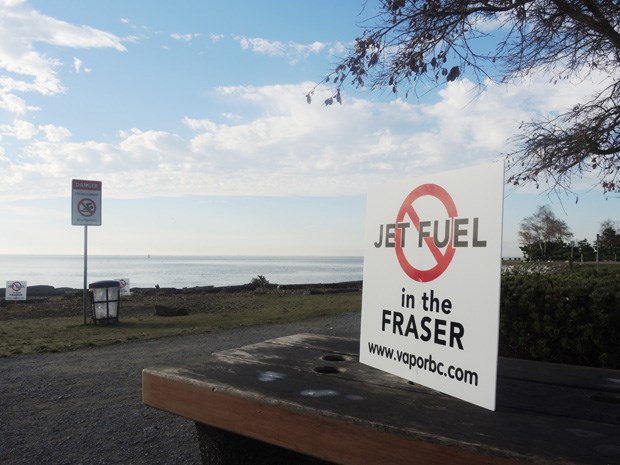 The City of Richmond is now fully engaged in dealing with the realities of a planned jet fuel terminal on the South Arm of the Fraser River, near Riverport.

In a report to city council this week, city engineers outlined numerous issues to be raised when the Vancouver Airport Fuel Facilities Corporation (VAFFC) — a consortium of national and multinational airlines — applies to the Oil and Gas Commission for permits to construct and operate a new jet fuel storage facility and pipeline from Riverport to Sea Island.

The issues are also to be raised in a recent amendment application by VAFFC to the B.C. Environmental Assessment Office (EAO) that seeks to expand the size of the pipeline by 36 per cent.

The city has previously stated it opposes the development of the jet fuel delivery and storage facility and the pipeline, which is planned to mostly run adjacent to Highway 99, then below Bridgeport Road, and across Moray Channel to its airport destination.

The staff report indicates the city continues to be faced with issues related to apparent inadequate consultation procedures.

The city wants VAFFC to fulfill a verbal commitment that would see VAFFC give it detailed information related to the pipeline permits, prior to the application, in order for it to comment in a “reasonable” amount of time. The city had previously asked the commission for an extension to review the permit but was denied, as the law had no such provisions.

“Staff recommend requesting the city be provided this information and given reasonable time to review and comment prior to (an) Oil and Gas Commission decision regarding the permit application,” noted the report.

The city has also taken issue with the tight consultation time lines for the “harmonized” environmental review by the EAO.

Staff have also expressed concerns about the pipeline’s impact to farmland along Highway 99, as well as Richmond Nature Park’s bog ecosystem.

Mayor Malcolm Brodie has also asked staff to reiterate to VAFFC that council wants assurances that the terminal — which can store up to 80 million litres of fuel with provisions to expand to more than 100 million litres — and pipeline be limited to supplying jet fuel to Vancouver International Airport only, and not be used to procure fuel for sale elsewhere.

Staff are also advocating for the pipeline to be placed under Bridgeport Road, and not elsewhere, to run westward to the airport, from the highway; VAFFC is proposing two other options in its amendment.

The overall project was approved by the provincial government in December, 2013. Critics have charged it will threaten the river’s ecosystem as Panamax tankers ply the narrow waters with toxic cargo.

VAFFC contends the terminal is necessary to eliminate fuel truck deliveries to the airport from Washington State. Another factor is the ability to import cheaper overseas fuel.

Other concerns, such as the overall impact of increased greenhouse gas emissions and the potential risk to the fishery, have fallen outside the scope of the EAO as a full federal review of the project was not required by law.

VAFFC has stated the bigger pipeline (from 30 cm to 35 cm in diameter) will not mean more fuel is pumped through it. Rather, the increased pipe volume will allow for fuel to travel more safely, under less pressure.

The city has repeatedly expressed concerns over the terminal’s fire suppression capabilities.