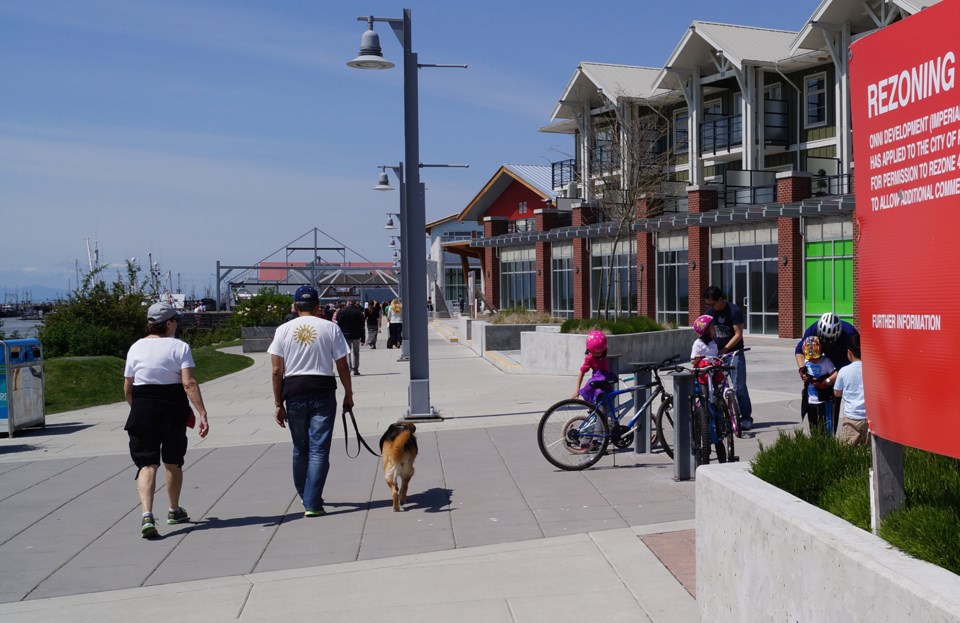 The Steveston boardwalk has been subject to rezoning applications from Onni Group for over a decade. In 2012 the developer constructed six buildings on maritime/industrial zoned land, which it paid for in 2001. Onni, for a fourth summer in a row, is now seeking more lucrative commercial zoning on the site. Feb. 2016.

The saga of rezoning Steveston’s paved, waterfront boardwalk at Imperial Landing has drawn to a close.

In the near future, instead of walking by empty buildings, one may see the likes of a bank, grocery store, offices, a café and a hotel.

That’s because in exchange for $5.5 million from developer Onni Group, city council agreed Monday to rezone the six buildings for commercial purposes, including 32 hotel rooms in the two most easterly buildings, near Phoenix Pond.

According to the City of Richmond, the $5.5 million will be applied to a new Steveston Community Centre.

Two of nine council members objected to the deal. Coun. Harold Steves said on Twitter that council had “sold out” for a deal that results in zero amenities, while Coun. Carol Day stated any unique ideas for the area (such as a Granville Island-style  market)  have been brushed aside for a “strip mall.”

Nevertheless, at Monday’s public hearing, the two sides settled on $5.5 million, the same amount of “land lift” determined appropriate by the late, land use economist Richard Wozny in his report to council.

“We got 100 per cent of the lift,” said Mayor Malcolm Brodie who emphasized timing was of the essence.

“I think the city held its ground and pushed this matter as far as reasonably could be done,” he said.

The last issue to deal with was an amendment to April’s rezoning application that will ensure Onni places a 24/7 concierge at the hotel — which is to be situated on the bottom floors and will rent units for up to 90 days.

Since 1998, the City of Richmond has contemplated its vision for the waterfront site of BC Packers. About half the site, to the east, became condos and a waterfront park, while the other half sat empty until 2012 when Onni built six buildings under maritime-industrial zoning, which is intended for servicing the Village’s marine industry. However, the buildings were built to also accommodate commercial uses.

Since 2013, the developer had failed to lease the space for maritime use and hence the buildings sat empty. Critics charged Onni with stalling in order to wait the city out to gain lucrative commercial rezoning. Meanwhile, council had always demanded more money, as an exchange for such zoning (which garners higher lease rates).

Local realtor Sean Lawson has stated the money should not be diverted to a new community centre, which should be paid for with general revenue. Instead, it should go to an additional improvement for the Village. Brodie said the money will be spent at council’s discretion for an additional feature for the centre.

He and other merchants have long argued rezoning the site would change the nature of the local retail sector. Brodie said the hotel was seen as a compromise as it does not affect merchants and should bring more visitors to the area.

Onni runs similar hotels elsewhere, although it was fined $24,000 by the City of Vancouver last year for violating bylaws.

As such, skepticism of the deal remains.

“Still not sure if Richmond City Hall is run by developers? Look no further than Steveston’s newly approved Airbnb hotel,” said past BC NDP MLA candidate Kelly Greene, via Twitter.

Community activist and area resident John Roston said the contribution should have been closer to $11 million. In order to avoid future conflicts, he believes the city needs to assess how buildings fit with existing zoning when building permits are issued.