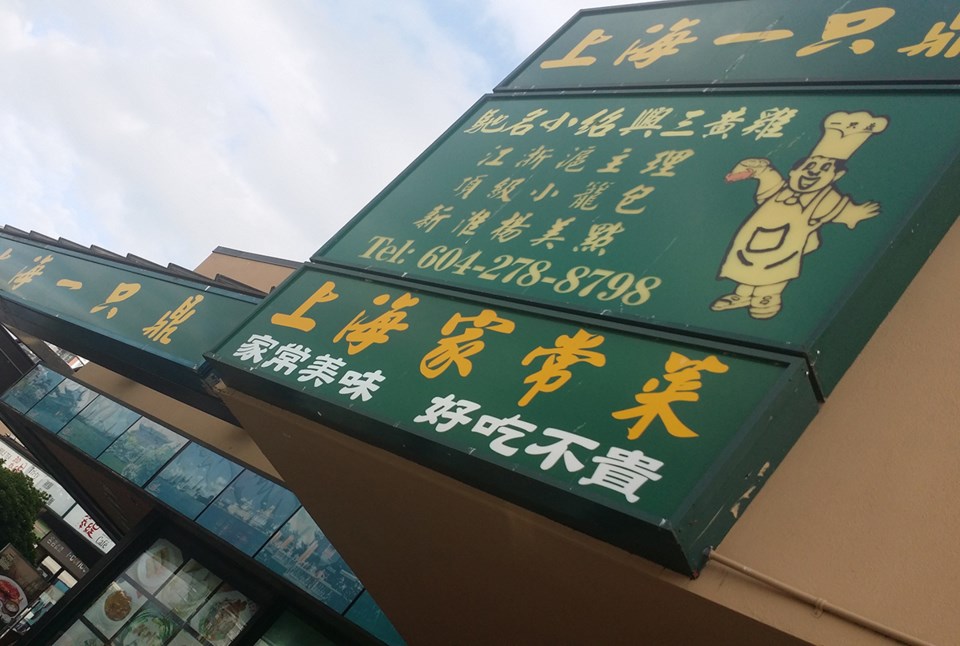 This restaurant has a bilingual English-Chinese sign for its name, but additional signage and posters advertising only in Chinese. The City of Richmond will determine whether such signage conforms to the planned clutter bylaw. Dec. 2015

The City of Richmond is headhunting for a new sign/business licence inspector to deal with Chinese-only signs and applicants best apply with a helmet and protective padding.

The full-time, one-year position, advertised online, has a long list of duties and skill requirements, however it’s the posted working conditions that may draw people’s attention and, perhaps, lead them to close the tab.

Those working conditions include: “Disagreeable situations, which include abuse, threats, rudeness and the risk of potential violence.”

City spokesperson Ted Townsend said the working conditions are in line with other job postings for bylaw enforcement and do not apply specifically to the new sign inspector.

Still, he noted that from “time to time” the potential for physical confrontations with bylaw inspectors is a reality.

“Since this is a new position, I cannot provide specifics regarding potential frequency of ‘physical harm,’” said Townsend.

After decades of Chinese-only signage and ads sprouting up in the city, a critical mass of residents protested, leading to a recent debate within the community and at Richmond city council as to whether or not such signs should be banned.

Earlier this year, council decided not to ban foreign-language signs. Instead, it chose to educate business owners to promote English on signs as a show of “community harmony.” Council also directed city staff to implement a recommended “clutter bylaw.”

It remains unclear what the clutter bylaw will entail, but it could address the likes of outdoor posters, flags and banners for advertising purposes — either with an outright ban or some form of regulation.

“Clutter is defined in many different ways in the jurisdictions that have such regulations. How we will specifically define what is and isn’t clutter is part of the work we’re going through now in drafting the bylaw. It’s extremely complex as there’s so many different types of things that can be posted permanently or temporarily on a business storefront or window,” said Townsend, via email.

Townsend said the new position (a temporary one, approved by council for one year) will address the revised sign bylaw dealing with clutter and also provide educational outreach.

As such, the city requires the applicant to speak fluent Chinese.

The position, which pays about $70,000, involves routinely visiting new and existing businesses and “encouraging” them to include English on their “business signage, advertisements and other forms of commercial communication.”

The applicant will also be expected to develop educational materials related to signage.

Meanwhile, community activist Kerry Starchuk, who spearheaded a petition to include English on business signs, said she questions whether any noticeable difference will occur with the clutter bylaw, which she said could be grandfathered in, creating a bureaucratic mess.

She said there are many other Chinese signs and advertisements out of the city’s control, such as Translink ads.

Furthermore, Starchuk, who feels Chinese-only signs are unharmonious, said she is hoping the city can address another potential problem regarding business signage.

According to the sign bylaw, an open house is allowed one sign on a street corner, however some real estate companies are placing multiple signs of different real estate agents for one open house.

“They guerilla-campaign right through the neighbourhood,” said Starchuk.