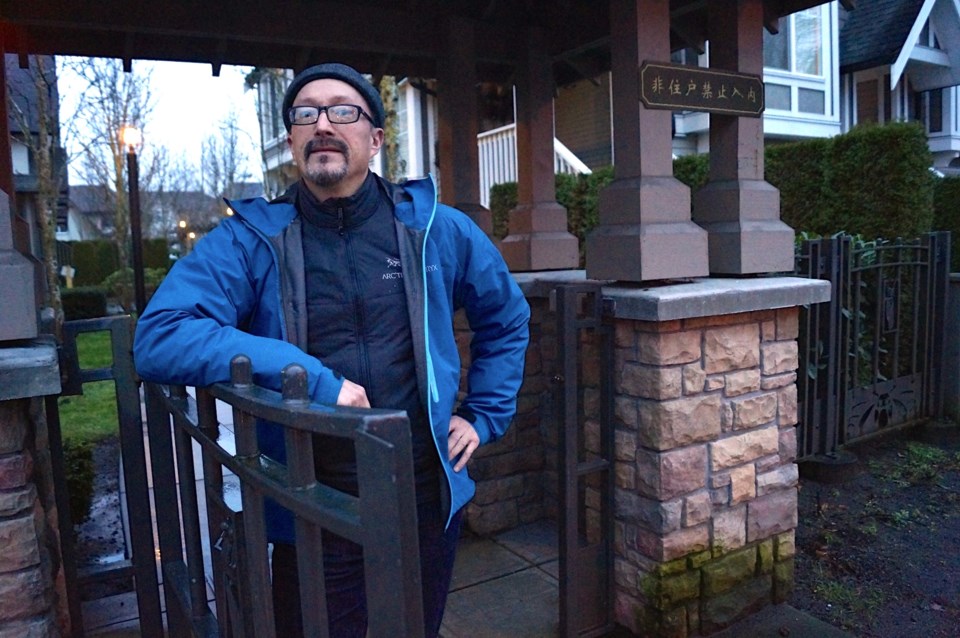 Andreas Kargut is leading a class-action Human Rights Tribunal claim against his strata council, which he claims has discriminated against non-Mandarin speaking homeowners. Dec. 2015.

A group of Richmond homeowners has filed a complaint with the BC Human Rights Tribunal after allegedly being discriminated against by a new Chinese-speaking strata council.

Andreas Kargut, who filed the claim on behalf of several other Wellington Court strata members, told the Richmond News a group of Mandarin-speaking homeowners purposefully voted out non-Mandarin speaking members from council.

Since then, the new council has moved to conduct all official business, including council meetings, in Mandarin.

“Anyone they deemed who was non-Mandarin speaking, they ousted,” said Kargut.

“For the most part, it was a very harmonious place to live,” said Kargut.

The new council was largely formed in 2014 after one Chinese member gathered a large number of proxy ballots to vote out the non-Mandarin speaking council members, contended Kargut.

A recent email to Kargut from the new strata president, Ed Mao, states: “We have no intention of using English during the meeting on December the 8th. That’s the most efficient way for the team this year.”

Kargut said some strata members took issue with a paint job that had cost overruns following the discovery of some rotting wood beams in need of replacement.

He said the members started rumours that the non-Mandarin speakers were stealing from the contingency fund.

The present council also fired its long-time property manager, First Service Residential (via Colliers in a portfolio acquisition), with 37 proxy ballots this summer.

“So now we have an all-Manadarin speaking council that fired our property manager and brought on another company.

“I think they were searching for a property manager that was cheaper,” said Kargut, who attended the last meeting as an observer.

“I wanted to see if they had the nerve to go ahead with (Mandarin only),” he said.

“At the end, he asked if I had any questions, but how was I supposed to ask any questions when I couldn’t understand what was going on for the past hour and a half?” noted Kargut.

Kargut said the new council told him it would hire its own interpreter for English speakers but not an official interpreter. He suspects that decision had to do with costs.

Tony Gioventu, executive director of the Condominium Homeowners’ Association, told the Richmond News he’s never seen a case like this. While he’s seen “three or four” instances in Richmond over the past five years concerning language problems, all of them have been resolved “quickly” with English-to-Mandarin translation services, not the other way around.

There is nothing in the B.C. Strata Property Act that defines what languages can be used in official strata meetings. However, Gioventu noted that official languages apply to legislative procedures and the court systems.

“The big question is whether that would extend to a strata corporation because it is bound by provincial legislation,” said Gioventu.

The News asked the Ministry Responsible for Housing for legal clarification.

“The Strata Property Act does not specify what language strata meetings should be conducted in or require interpretation services.  A strata corporation may wish to get advice from a lawyer on how best to meet the various language preferences of its owners,” the Ministry said, via email.

“It’s a human rights issue in any case because English and French are our official languages and these individuals are not capable of communicating for the business of their strata underneath provincial legislation. So that’s what opens the door,” added Gioventu.

He said the problem in Richmond may lie in the extreme concentration of Mandarin speakers in the city.

“I don’t know what the solution is.

“I go to some communities where everyone speaks Punjabi, and there’s only one person who doesn’t speak Punjabi, and they’re very respectful and conduct their business in English. But, even there, there have been some serious misunderstandings about how the law applies as a result of the interpretations,” noted Gioventu, who believes it is imperative to have official translation services.

Presently, strata fees are under $200 per month, Kargut said, but the fear amongst the outcast members is that the property will not be maintained properly.

Kargut points to a cement slab at the sidewalk entrance to one of the homes that has recently been raised. It poses a tripping hazard to visitors and is on common property.

“We’d usually have that fixed in no time, but it’s just sitting there now,” he said.

Gioventu said immigrants from densely populated cities tend not to understand the concept of common property and its required maintenance.

“It’s not just a Chinese thing.

“One of the challenges we have seen is there’s a sense of basically running your building to failure. You use it as best you can, and then you sell it off because land is in such high demand,” he said.

The complaint has yet to be considered by the Tribunal.