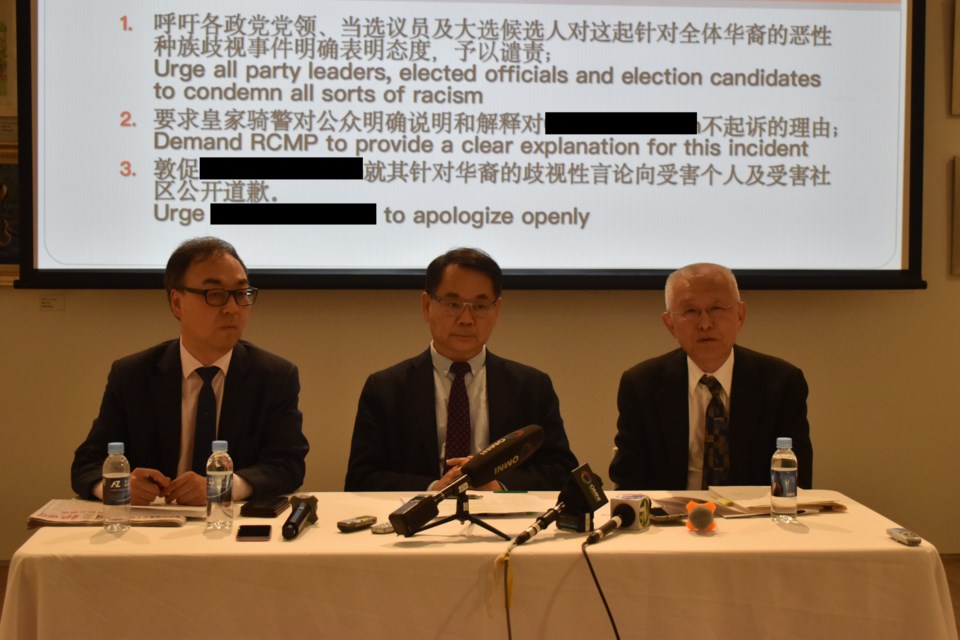 A group of Richmond Chinese residents, including Councillor Chak Au, are demanding to know why the Caucasian woman who was seen hurling racial slurs at a Chinese immigrant in a local parking has not been charged.

The group, which held a press conference Wednesday with the motto, “Together say no to racism,” are also urging the woman to apologize openly to the Chinese Canadian community.

“I have received lots of emails and calls following the incident. After watching the disturbing video, many people think this isn’t just between two individuals but also impacts the whole Chinese community,” said Au.

Last month, a video went viral that shows a woman yelling racial slurs at another woman who filmed the incident. The Richmond RCMP immediately began an investigation but concluded no charges would be laid.

Last week, Au’s group circulated a letter on WeChat demanding to know why the woman would not be charged and urging all elected officials to declare their stand against racism. On Monday, that same letter was printed on the front page of two local, Chinese-language daily newspapers.

In response, Supt. Will Ng of the Richmond RCMP issued an open letter, published in the Richmond News as well as the Chinese-language dailies, stating that the rant did not meet the threshold of hate speech and that the driver had written an apology letter to the victim, who did not want to pursue the matter.

Regardless, the group is not satisfied.

A written statement handed out at the recent meeting states: “Unfortunately, we haven’t seen RCMP explaining their investigation of this incident in detail, even after one month from the occurrence. And most political leaders from all three levels of the government remain silent, except Richmond councillor Michael Wolfe and Au, who both declared no tolerance on racism.

Although, Mayor Malcolm Brodie condemned the rant in no uncertain terms in the Richmond News, while other councillors including Kelly Greene expressed their disgust in posts on Facebook.

“If we don’t stand up this time, (racists) might think we can easily accept discrimination. We don’t want to see this single case be more common in the future,” said Au, adding that the investigation has left many questions and doubts still hanging in the air.

Au’s opinions were echoed by Lu Chan, a practicing lawyer in Vancouver and one of the organizers. Chan explained that many people want to know why this incident did not met the threshold for criminal prosecution after the police consulted with BC Prosecutions Services (BCPS) and where they can get a copy of such threshold.

“People in the community want to know the decision criteria in terms of whether to prosecute a case or not. They want to know the difference between hate crimes and non-criminal actions in the police department,” said Chan, adding that “especially in Canada, a free and democratic society, the public has the right to know what exactly happened in the police department before the decision not to prosecute.”

Along with issuing their demands, the organizers have launched an online petition, encouraging people from different cultural backgrounds to say no to racism and protect the value of diversity in Canada. Kenny Zhang, also an organizer, said they had collected 2,025 signatures so far.
Zhang said the aim of the campaign is to address the racism in the local community, but they aren’t targeting any single ethnic group.

“We just want to urge the lady to apologize to the local Chinese community. If she doesn’t want to do that, we won’t force her to do so,” Zhang added.