Autistics United ask to be heard as they protest Richmond march

Autistics United Vancouver — a self-advocacy group — will march this Sunday in Richmond to protest a walk that claims to speak for them.
Oct 3, 2019 8:00 PM By: Maria Rantanen 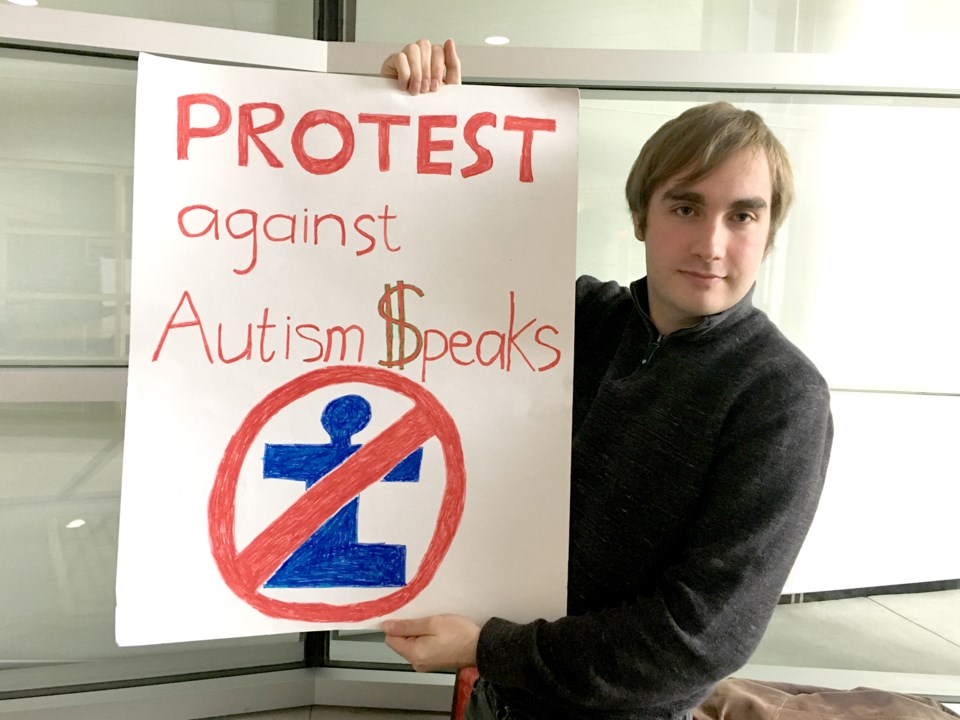 Sam McCulligh and his group Autistics United will protest a fundraising march put on by Autism Speaks.Maria Rantanen

Autistics United Vancouver — a self-advocacy group — will march this Sunday in Richmond to protest a walk that claims to speak for them.

The message that Autistics United members want to send is that autistic people should be allowed to speak for themselves, that they don’t want to be labelled a tragedy that needs to be grieved and they don’t want their behaviours suppressed.

Sam McCulligh is an autistic person. He says he doesn’t just “have” autism — it’s not something that can be neatly tucked away in his pocket, rather, it’s a core part of his identity.

This is why therapies used to minimize autistic behaviour or “camouflage” autistic people are so distasteful to him.

Applied behaviour analysis (ABA) is the “gold standard” of autistic therapy, McCulligh said, but he calls it “compliance training” with a system of external rewards and punishments. “Stimming,” like intense fidgeting, is discouraged although it is something that provides comfort to autistic people. They are given messages like “quiet hands.”

McCulligh doesn’t think autistic people need to just conform to the “neurotypical” world around them.

McCulligh and Vivian Ly are the Vancouver chapter leaders of Autistics United, a self-advocacy organization with five chapters across Canada that work to improve the lives of autistic people.

They will both be protesting on Sunday at the annual Autism Speaks Canada fundraiser, whose goal is to raise $80,000.

Autism Speaks Canada is a charity whose mission is to promote solutions, support autistic people and their familes  and increase understanding and acceptance of autism. Their mission also includes “advancing research into causes and better interventions” for people with autism.

McCulligh and Ly don’t mean to criticize families for coming out to the walk, rather to educate them on the messages and mandate of Autism Speaks.

For example, in the 100 Day Kit, available on the Autism Speaks Canada website, parents are told that a diagnosis of autism may cause them to go through the five stages of grieving.

Greta Thunberg, the 16-year-old Swedish girl who sparked the Global Climate Strike movement, is on the autism spectrum.

Many high-profile politicians made fun of or belittled her because of her autism, including U.S. President Donald Trump who mocked her on Twitter, and People’s Party of Canada leader Maxime Bernier, who called her “mentally unstable,” although he later walked back on his comments.

This is typical of how autistic people are belittled and infantalized, McCulligh said.

“Our ‘disability’ is used against us to discredit us,” Ly said.

Sarah Ahmed, director of marketing and communications with Autism Speaks, however, said that the voice of autistic people is “heard throughout the organization via employees and volunteer positions.”

The walk takes place on Sunday at the grounds of the Pacific Autism Family Network (PAFN), which is the hub in a network of autism resource and knowledge centres around the province.

Autism Speaks is a sponsor of PAFN, having given $500,000 toward the capital costs of the building.

PAFN board chair and interim CEO Sergio Cocchia said, when the centre was created, they brought together a group of self-advocates who are “intricately involved in every aspect of what we do. We specifically created a group during the construction of our building, called Voices of Autism, to inform our policies and programs moving forward,” Cocchia said. They also draw on parents of autistic people who can’t self-advocate.

However, McCulligh and Ly said they would rather autistic people spoke for themselves, “autistic-led but ally-supported.”

“Nothing about us without us” is the core of their philosophy, McCulligh said.

Ahmed said that Autism Speaks understands many people disagree with their mission, but they listen and learn from the autism community; however, she added, some concerns are “outdated.”

“We are proud of our work and we welcome an ongoing conversation to help address these misconceptions head-on,” Ahmed continued. “We are happy to talk to protesters and tell them about our work.”