New $14 billion crossing will now run from Delta over the top of Richmond and straight to Vancouver
Apr 1, 2016 9:16 AM By: Richmond News 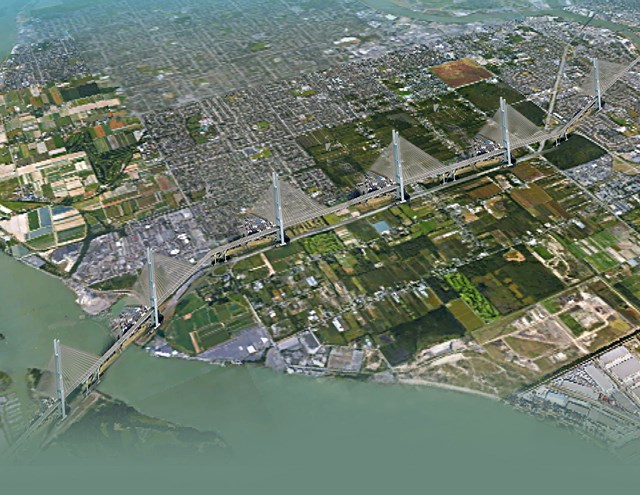 This new artist's rendering depicts how the updated Massey Bridge plan will see Richmond by-passed altogether. For more images, see the link at the end of the storyGary Slavin

The Richmond News has learned that, in response to a flood of complaints from the City of Richmond and its residents, the B.C. government has opted out of landing the new Massey Bridge on Lulu Island altogether.

Instead, the proposed, $3.5-billion, 10-lane toll crossing, as depicted above, will stretch across Richmond and traverse the north arm of the Fraser River, all the way into Vancouver.

As a result, the cost of the bridge will likely quadruple to $14 billion and won’t be completed until 2041.

Also, with the new 12-kilometre span — the biggest in North America — not touching down on Richmond soil, it’s anticipated an extra 500 acres of farmland will be placed back into the Agricultural Land Reserve.

It’s hoped the new plan will alleviate congestion concerns at the Oak Street Bridge, which will now be redundant.

The inflated cost of replacing the Massey Tunnel will be recouped by tolling vehicles $20 per crossing and charging ships 10 barrels of aviation fuel when they pass underneath.

For more on this breaking story, check the date on your calendar.