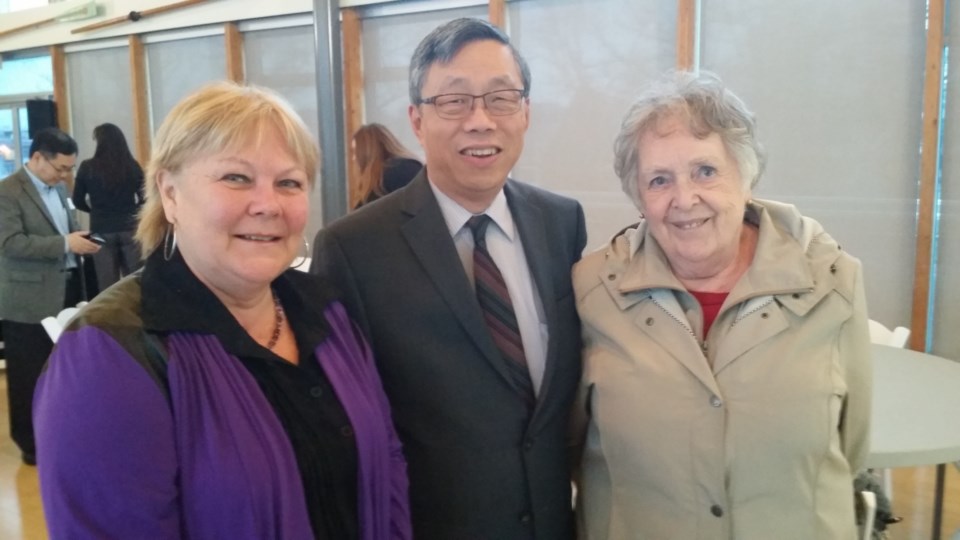 Condemnation of racist flyers distributed door-to-door last week in Steveston has been swift, but many community leaders say it should not detract from reasonable public discourse on foreign ownership of homes and policies to make for a more inclusive community.

The flyers allude to white people becoming marginalized by Chinese people, who refuse to speak English whilst driving up real estate prices.

Richmond resident Albert Lo, chair of the Canadian Race Relations Foundation, said now is the time for citizens to unite to “condemn extremism and radicalism and anything of this nature.”

Lo said the flyer should not deflect from legitimate concerns many people have concerning foreign ownership of homes and the impact it is having on housing affordability. In Richmond — prior to the recent implementation of a tax on foreign purchasers — about one in four homes were being purchased by non-residents, 90 per cent of whom were Chinese nationals, according to the provincial government.

Lo said government leadership at all levels, in dealing with foreign and local speculation in the housing market, has been lacking.

He said instances of foreigners evading taxes has fuelled racism.

Steves noted he grew up in a culture of racism against Japanese people.

“I hate it when I see that propaganda happening in our community,” he said.

But, “we have to solve these problems.”

Community activist Kerry Starchuk called the flyer “sad” and “unfortunate” but was quick to point out that the government has failed to enact inclusive policies to deal with an unprecedented rate of immigration, as well as foreign money entering the housing market.

“The flyer illustrates that the lack of public dialogue on these contentious issues can result in individuals lashing out in various ways to express their own frustrations. As long as all three levels of governments turn a blind eye to the rapidly unfolding changes, this may continue. Let’s hope for positive outcomes,” wrote Starchuk, via email to the Richmond News.

In 2013, Starchuk led a petition to have the City of Richmond enact a bylaw mandating an official Canadian language on business signs. She maintains signs without English are divisive and foster segregation amongst races.

Lo said that while he believes the flyers were distributed by a “radical” seeking attention, it doesn’t mean there aren’t serious issues in the way Richmond may be developing into pockets of ethnic enclaves — something he disagrees with strongly.

“They’re comfortable, and there’s no need to interact,” said Lo.

According to Statistics Canada, in 1991, 66 per cent of residents said English was their first language, whereas in 2011, the rate dropped to 37 per cent. One in 10 Richmondites now report not being able to speak English at all.

Whether a sign bylaw would help people interact better is a matter of debate, but Steves said such debate was never fully realized.

“Richmond council tried to downplay it because they were afraid to fan the flames of racism,” he said. Council was “reluctant to come down heavy-handed.”

To what extent the sentiment in the flyers is shared by others is now being debated on social media. Some Facebook and Twitter users have stated the flyers come as no surprise.

Coun. Chak Au said it’s likely a spillover effect of the election of Donald Trump as president of the U.S.A (the flyers cited “alt-right” websites linked to white nationalism).

“I hope that this doesn’t reflect a larger number of people,” said Au.

“But it does reflect the anxiety people have. Seeing the housing market skyrocket and seeing in the public space half the signs you can’t read, that produces anxiety in people.”

However, he said there has been a “backlash” against recent immigrants from Mainland China, who have found it “harder to assimilate,” compared to Hong Kong immigrants of the early 1990s, who came from a British system of government.

“You can live and work in Richmond without learning the language. And that’s an issue,” said Dang.

“We’re going through (growing pains) right now. It’s typical. There’s an identifiable people. And there has been some friction,” said Dang.

Richmond councillors recently signed an advertising contract for city-owned bus shelters that mandate English. It has chosen an education campaign to promote English on business signs. Council is also creating a bylaw to address sign “clutter.”

“It’s common courtesy you express what you do in a language of the country,” said McNulty, adding that he continues to push for education.