Five students from The Richmond Academy of Dance have stood out among hundreds of competitors in regional arts festivals and were selected to compete in the annual Provincial Festival in May in Chilliwack.
Apr 5, 2019 6:27 PM By: Daisy Xiong 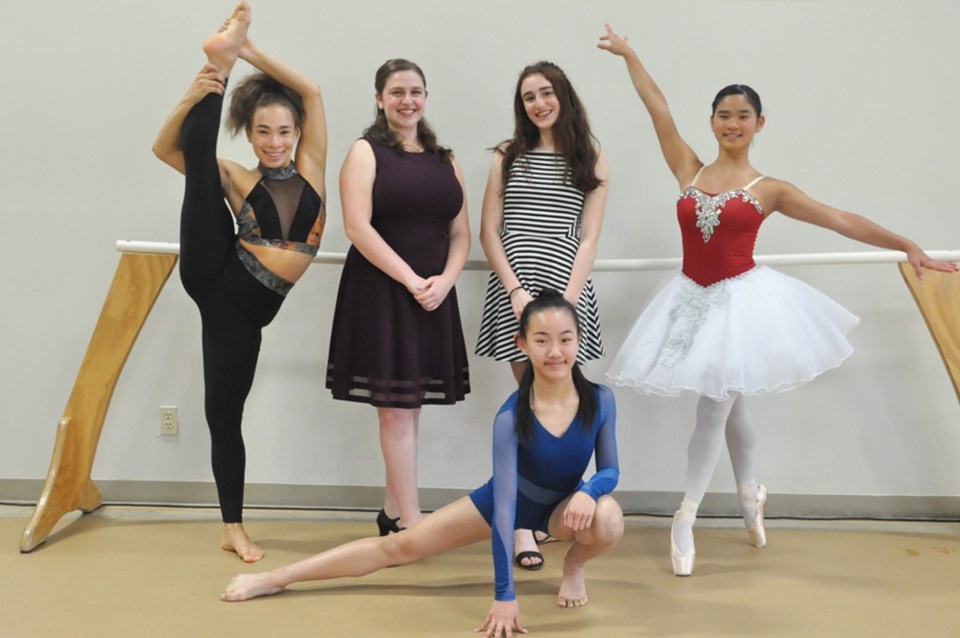 Students at The Richmond Academy of Dance (from left) Marlowe Zimmerman, Lyrie Murad, Omer Murad, Ameia Mikula-Noble and Hailey Chan (front) have been selected to compete in the annual Provincial Festival in May. Daisy Xiong photo

Five students from The Richmond Academy of Dance have stood out among hundreds of competitors in regional arts festivals and were selected to compete in the annual Provincial Festival in May in Chilliwack.

Each year, every regional festival sends the best-performing young artist in each category, between the ages of 10 and 28, to participate in the five-day Provincial Festival, which encompasses master classes, lectures, coaching, workshops, technique classes and adjudications.

“We are very excited and incredibly proud,” said Heather Joosten-Fair, artist director and co-founder of The Richmond Academy of Dance, along side her co-founder Annette Jakubowski.

“There are not any other schools in the entire Lower Mainland that have representatives in this varying amount of disciplines.”

Two sisters from McMath secondary, Omer Murad, 13, and Lyrie Murad, 16, took first place at the Coquitlam District Music Festival and will compete in the Provincial Festival in the classical vocal and music theatre categories.

Hailey Chan, a Grade 7 student at Tomekichi Homma elementary, and Ameia Mikula-Noble, excelled in the Pacific West Festival and will compete in the provincial competition in the ballet category.

Marlowe Zimmerman, 16, won the Chilliwack Festival for jazz dance and is also heading to the provincial competition.

"When you are little, there are so many people competing; when you get older, many people quit, but the people who stay are really good. The competition is so difficult.

“It’s so satisfying and nice to know that you are actually good. All your hard work has been paying off.”

The young artists, who practise singing or dancing at least 20 hours per week, said the competition is a good way to evaluate their ability, but winning is not the only goal.

“Sometimes it feels like a lot of pressure, but healthy competition is also there...There is a certain sense of yourself when taking part in a large category in a competition,” said Zimmerman.

“When I was younger, it was kind of like, I had to win, that was the only way. But now I get up the stage and think,  'that was really fun.' That’s all that matters.

"You don’t win all the time, if you don’t win a place, it doesn’t matter, as long as you felt good about the way your dance went or your song went."

“We have a whole professional division...and we have a general division for young people who want to learn for the love of arts, but who don’t necessarily want to do it professionally,” said Joosten-Fair.

Annette Jakubowski added, “Our goal is to provide enough professional training so that the students can go into this field professionally.