Lineup at Richmond’s theatre includes themes touching on many segments of society
Aug 15, 2019 9:00 AM By: Maria Rantanen 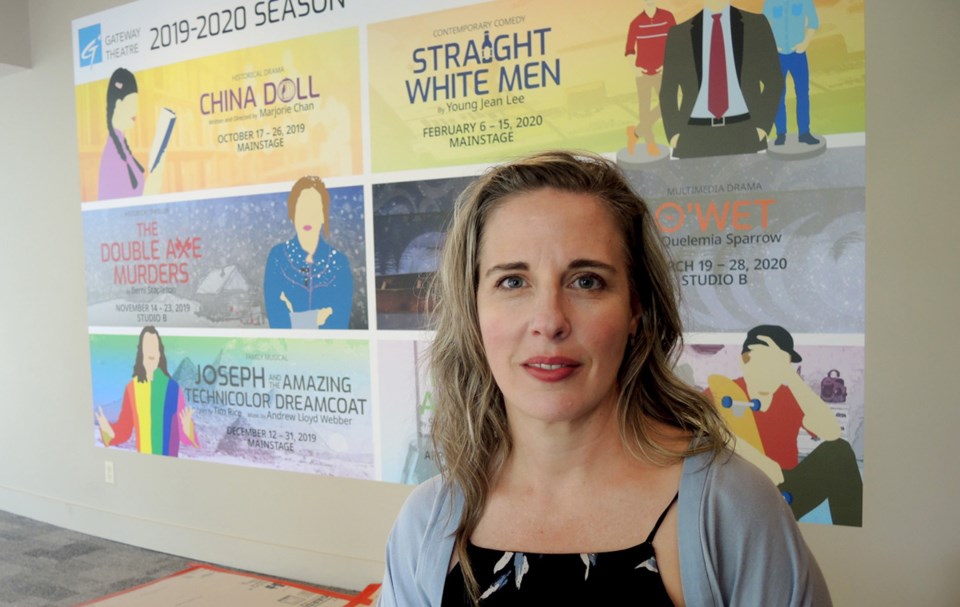 Barbara Tomasic, interim producer at Gateway Theatre, is excited about the new season and new look for the Richmond theatre.Maria Rantanen

Gateway Theatre is presenting a first this season at its Minoru Park venue: six plays directed by six women.

Furthermore, four of the six plays in the season are written by women, explained Barbara Tomasic, who has taken over as interim producer at Gateway after long-time artistic director Jovanni Sy stepped down earlier this year.

Tomasic credits the female-dominated program this season to Sy who chose the plays and directors before leaving Gateway.

Women make up the major of theatregoers and the majority of those purchasing tickets, and yet, so many theatre shows are comprised of six men and one woman on stage, Tomasic pointed out.

“It’s time to be championing people who aren’t being championed,” she said.

The themes of the shows in the 2019/20 Gateway Theatre season cut through many segments of society this year and its topics range from Chinese history to LGBTQ+ themes to indigenous culture.

“This season, really, it represents all aspects of our society,” she said. “It’s representing the community of Richmond but (also) beyond.”

The diversity can be seen in both the stories showcased at the Gateway Theatre this year as well as in who is being cast, Tomasic explained.

It’s really important that “when we come to theatre we see what we see in our lives.”

“The people we see on stage need to look like what we see in our everyday lives,” she said, adding that it shouldn’t be different or exceptional to have people of diverse ethnicity and gender on stage, but just a part of what is done regularly.

The new season will also include a new look for Gateway Theatre.

Currently, the Gateway Theatre is covered in scaffolding and parts of the theatre are a construction zone. The City of Richmond is spending $3.7 million on renovations to the theatre that include soundproofing of studios A and B and upgrades to the electrical system. The exterior envelope and windows are also being redone and the HVAC system will be upgraded. There will also be fire safety improvements.

Tomasic said this is turning out to be one of the theatre’s hottest seasons with people “scooping up subscriptions.”

The season launches with China Doll by Marjorie Chan, a historical piece and a coming-of-age story that Tomasic thinks will be relevant to a Richmond audience — and it includes a performance by Sy.

To help appeal to a wider Richmond audience, China Doll will have surtitles, a transcription in traditional and simplified Chinese. The surtitles during this production are an experiment to see how it plays out, and they might be used in other productions as well.

Tomasic calls the season’s second production, The Double Axe Murders by Berni Stapleton, the “outlier” of the season — it’s a mystery set in Newfoundland in the 1800s, but this doesn’t mean it won’t have a look relevant to 21st century Richmond, she added.

In addition to being interim producer, Tomasic herself will be directing the holiday production of Joseph and the Amazing Technicolor Dreamcoat by Tim Rice and Andrew Lloyd Webber. While the musical is based on the bible story about Joseph, the play won’t be set in Egypt, Tomasic said, rather in a dream world of a young man who wants to be a musician, and who sets about exploring different musical genres.

Tomasic thinks the most controversial play will be Straight White Men, by Young Jean Lee, a story of three adult brothers home for the holidays who have to confront a shift in family dynamics. The play addresses society’s expectations of men, but with humour delivered in a relatable way, Tomasic said.

Skyborn, written by Quelemia Sparrow, was originally called O’Wet, a local indigenous word that is the sound of a paddle in water and also a chant. The play weaves a magical story of a woman and her grandmother on a spirit canoe journey.

From Alaska, written by Sebastien Harrisson and translated by Leanna Brodie, tells the story of a senior and a troubled youth and goes into themes of how different generations can relate to each other and what they have in common.

Joseph and the Amazing Technicolor Dreamcoat and China Doll are the only productions being fully produced by Gateway Theatre; the rest are by outside theatre companies.

Tomasic said she’s excited about the upcoming season and in general what’s happening in the Minoru precinct of Richmond, as engagement with the community of Richmond becomes a priority for the theatre.

“We’re not Vancouver, that’s not where this theatre is — we’re a different world, we live in a different area and we have a totally different community, “ Tomasic said. “It’s exciting to engage with that and I think the season does that very successfully and I think just the fact the city is investing in our growth is exciting.”

For more information, go to GatewayTheatre.com.