At her day job, Richmond’s Evelyn Sun teaches science students at UBC to conform to the formulaic and rigid confines of writing their findings in a plain and straightforward manner.
Oct 4, 2016 3:51 PM By: Philip Raphael 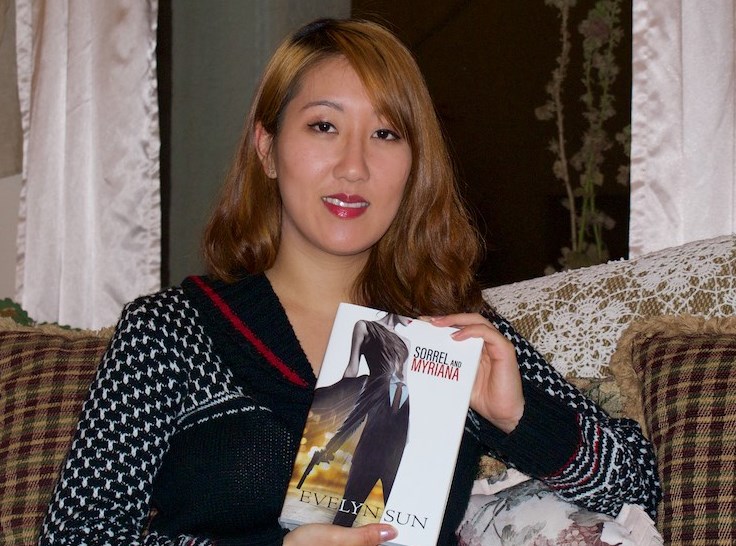 Local author Evelyn Sun turned her love of creative writing from a hobby into a professional endeavour with her first book, Sorrel and Maryiana, which enters the genre of Gothic horror. Photo submitted

At her day job, Richmond’s Evelyn Sun teaches science students at UBC to conform to the formulaic and rigid confines of writing their findings in a plain and straightforward manner.

But when she sits down at night to fashion her own compositions, her style is filled with drama, sweeping dark themes and a good measure of graphic violence. It’s a Jekyll and Hyde-like transformation that has earned her first book, Sorrel and Myriana, a place in the narrow, Gothic horror category.

“I’m not really a horrible person who goes around thinking bad thoughts all the time,” said Sun, a Burnett secondary grad and now a PhD student who was surprised her work garnered such a response.

At first, she wasn’t sure how to take the characterization of her work after it underwent an editorial evaluation by her publisher. Was it good? Was it bad?

The category is not generally blessed with a lot of titles, she said, so that was a positive.

“Gothic horror, it’s a pretty narrow genre,” she said, adding that it was so slim she had to hit up Google to get a description.

“There’s so many elements to my story that I really didn’t know what the genre was,” she said. “On Google I found out (Gothic horror) was classified as a darker romance, which I kinda see how my book falls into that, especially with the horror.

“There’s a lot of bloodshed in my book. It’s quite a violent story.”

The plot spans a time from the 1930s to 1960s and follows Myriana, a young rich girl, whose high-living way of life crumbles after her father’s death, leaving her opting to marry a handsome tycoon, Sorrel, who turns out to be an organized crime boss.

“He’s a sadistic man who enjoys torturing Myriana who endures and is changed by that treatment,” Sun said. “She starts to see the world a little differently; the line between what is right and wrong becomes blurred.”

Eventually, Myriana becomes so comfortable with the criminal lifestyle she takes over the syndicate from her husband, whose point of view is adopted for the second half of the 560-plus page tome.

It took six years for Sun to complete the tale.

“That was such a long time that I could certainly see the shift in my writing style when I went back to edit it,” she said. “I made huge changes to the beginning because I saw that I definitely improved as a writer.”

When she started, Sun said she knew the plot would follow crime fiction.

“It was to be something pretty generic where a detective is looking into organized crime,” she said. “But then I started the story with a woman running away and thought if I wrote the story from her point of view, it would be more interesting.

“It had that female empowerment thing going on. And as I continued writing, it kept coming to me.”

That drive to tell a story first became evident for Sun when she was in her Grade 10 English class. Having one of her short stories published in a national competition further encouraged that.

“It was very exciting to see that in print,” Sun said. “That was really my starting point, because I always loved literature, the classics like The Three Musketeers and Shakespeare’s work. But I didn’t realize that I could do that myself and be a literary writer.”

That’s why she entered university and studied sciences.

“I have two passions,” she said, “and I decided to pursue sciences. But I realized that there’s no flexibility in that kind of writing. You follow an outline and that’s how it goes. You’re supposed to be concise and to the point.”

That left Sun trying to find a way to channel her creative side and she started writing a novel, as a hobby.

“I started that in my first year at university,” she said, adding that when it was completed, she wasn’t sure if she should get it published. “But I looked at the project on the whole and decided, yes, I should at least try.”

Sorrel and Myriana is available for order from most major online book retailers, including the Friesen-Press Bookstore and Amazon. The eBook is available from Amazon Kindle, iTunes Bookstore, Chapters/Indigo Kobo, Barnes and Noble’s Nook, and GooglePlay.