Mural, to be unveiled Saturday, is first public art commissioned through city's mural program
Sep 25, 2019 11:30 AM By: Kirsten Clarke 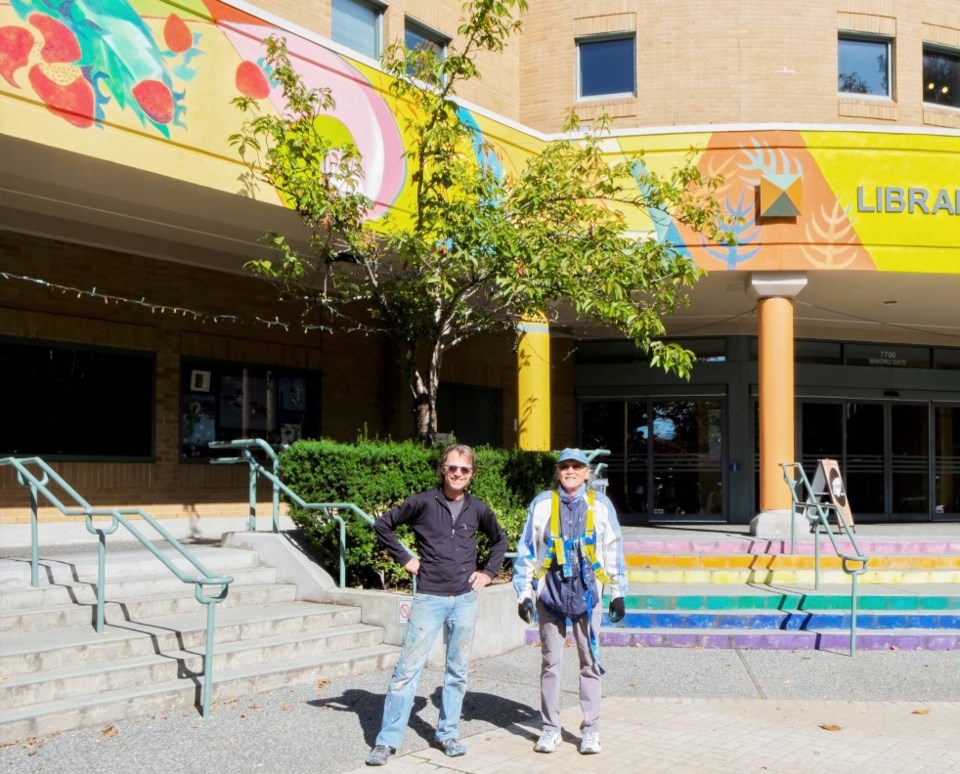 Richard Tetrault (left) and Jerry Whitehead (right) stand in front of the summer side of their mural.Kirsten Clarke

Encircling the building is Continuum, a tapestry-like mural painted by Vancouver-based visual artists Richard Tetrault and Jerry Whitehead, who have collaborated on multiple projects together.

The mural covers the building’s fascia — a frieze or band around the building — and is the first major public art to be commissioned as part of Richmond’s Community Mural Program.

The building no longer resembles a beige “sarcophagus,” as it was once described to the artists by a Richmond resident, said Tetrault.

“It didn’t really look like a cultural centre from the outside,” said Tetrault, “so much as it was kind of ambiguous in its nondescript colouring. So, our overall vision was to make a tapestry-like design that would really express (that it was a) cultural centre without having to read it somewhere.”

The mural is designed as one continuous piece depicting the four seasons, in some spaces using abstract, colour-blocked designs, while other spaces are filled with the multicultural iconography of Richmond, including strawberries, fish hooks, salmon and lanterns.

The activity of the centre is represented as well, said Tetrault, who previously designed a mural at Storeys and displayed his works in galleries around Richmond.

“For example, the library is represented with a large book with images coming out of it, and that recurs in a couple different locations. There’s also a musical element (to the design) because music is a big part of the (centre’s) programming,” said Tetrault.

“(The mural) also taps into some history that we got from the city archives...and uses some plant and animal forms that are indigenous to Richmond.”

Other designs, such as pottery and a fantastical beast on the southeastern corner of the centre, were designed by young Richmondites through the mural’s public consultation in August.

The mural also incorporates First Nations traditions, explained Whitehead, who himself is Cree. In Indigenous culture, summer is always to the south, winter to the north; spring is to the east, and fall, to the west. The cyclical nature of the design is also drawn from Indigenous traditions.

And as the seasons progress around the building, the colours of the columns surrounding the structure change to reflect them.

“It is the first major public art mural commissioned as part of the program, which we hope will provide opportunities to make highly visible public spaces more vibrant, foster community dialogue and engage diverse and multi-generational communities,” said Adams.

The city conducted an arms-length artist selection, explained Adams, with local professional artists, arts professionals and community representatives all competing for the opportunity to enliven the cultural centre.

Tetrault said that he and Whitehead were “really honoured” to win the city’s competition.

According to Tetrault, his main modus operandi for painting murals is community engagement, where the art can hold a strong sense of place, time and identity in the community, as well as working to integrate the mural into a building’s architecture.

Murals can help to welcome the community and enliven public spaces, said Whitehead.

While some muralists prefer to project their designs onto the work surface, Tetrault and Whitehead use a more old-school method — a series of over 20 large cardboard stencils that one of the artists holds against the wall as the other paints.

The stencils also allow for a more organic design, as they can be flipped around to suit the space, said Tetrault.

Some parts of the centre were hard to access, which was the main challenge painting the mural, said Tetrault, apart from fickle September weather.

“There’s some pretty tight quarters, so some of the sections we had to do with ladders because our boom lift can’t get into all (those areas),” said Tetrault, adding that in some sections the artists had to paint through and around trees.

The surface of the wall, a rough stucco, is also somewhat challenging to paint, added Tetrault.

While the two artists might have their own styles — Whitehead prefers bold, primary colours while Tetrault prefers more earthy tones — they work seamlessly together, allowing the mural to progress somewhat organically.

“We really just stand back and look at (the mural) and see how it’s progressing,” said Tetrault. “Every day, we just conceptualize it right at the start and then we just intuitively seem to work well together. And that comes from working many hundreds of hours together on other projects.”

The mural will be officially unveiled Saturday, Sept. 28 as part of Richmond Culture Days. The event will kick off with a Brazilian dance performance by Maira Daiha at 10:50 a.m., followed by speeches, and the formal unveiling and mural tour by Tetrault and Whitehead at 11:45 a.m. Mayor Malcolm Brodie and other dignitaries will be in attendance.