Local business thriving in exporting vitamin-enriched gummy bears around the world
Feb 7, 2014 11:40 AM By: Philip Raphael 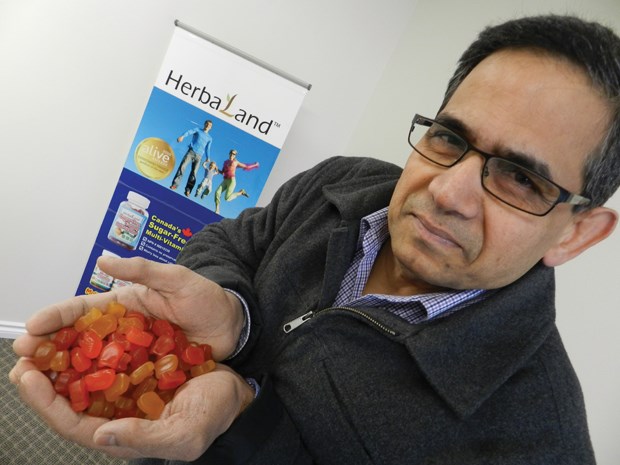 Musharaf Syed, managing director of Herbaland, displays some of the gummy bear health suuplments his company is exporting to markets around the world.Philip Raphael/Richmond News

To be a winner in the business world doesn’t always mean you need to be tough and hard-nosed.

Being soft, squishy, and also sweet can work, too.

That’s just what a Richmond-based natural dietary health, beverage and snack product manufacturer is doing. And it’s earned Herbaland Naturals Inc. some recognition as one of the finalists competing for the Best International Trade Award in the annual Small Business BC Awards Contest.

Started in 2009 pretty much on the kitchen table of Musharaf Syed, Herbaland’s managing director, the firm has experienced dramatic sales growth over the past four years. In 2013, revenue was around $2.5 million, with projections to take it much higher as new international markets come on stream.

Leading the way in products is Herbaland’s line of gummy bear supplements containing a range of vitamins aimed squarely at young consumers who often shy away from taking capsules or tablets.

Today, the company employs 14 and ships vitamins, as well as skin care products, to more than 20 countries in the Middle East, Europe and Asia.

“Canada is seen overseas as a safe, clean and trusted supplier of these types of products,” Syed said, adding that while the ingredients for the supplements may come from sources around the globe — such as acai, an antioxidant-laden fruit from Brazil — the manufacturing process here is deemed very reliable.

To meet standards in the Middle East, Herbaland’s production facilities are Halal certified, plus the gummy bears are made using plant-based products rather than gelatine, making it a vegan product.

“That way we can also sell into India which would be difficult since gelatine is made from cow products,” said Syed, who came to Canada in 2002 from Pakistan and worked in airport security for a number of years before starting up Herbaland.

While the kids’ gummy line is growing, adult-focused products are also in the works and include a green coffee bean supplement which is currently popular for weight management.

Aside from expanding market share and devising new products Herbaland keeps an eye on community involvement by supporting the Richmond Hospital Foundation, Red Cross and UNICEF.

Also in the works is the Herbaland Dream School Foundation which draws five per cent of annual revenue to establish a school and library in a yet to be determined site somewhere in South Asia.

“We didn’t want to be just all about money, and transferring a small portion of our revenue to a worthy cause was something important for us to do,” Syed said.

The winners of the Small Business BC Awards Contest will be announced at a ceremony and business networking event  Feb.27 at the Pan Pacific Vancouver.