Rabbit rescuers to the rescue in Richmond

With Easter approaching, Cindy Howard and her gang are speaking up for the gentle creatures who can't speak for themselves
Mar 17, 2016 3:56 PM By: Philip Raphael 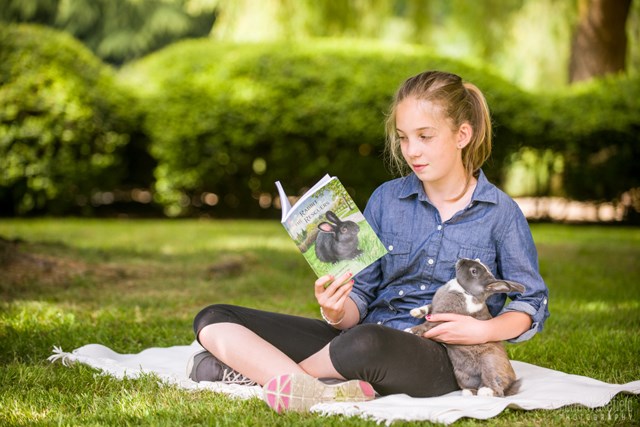 Jingles, a rescued bunny rabbit, gets a portion of The Rabbit Rescuers read to him at Minoru Park, which has been a hot spot for dumping pet rabbits in Richmond for many years. Photo by Karla Wakefield.

Pedro’s hind quarters start to shimmy and shake to some rhythm imperceptible to human senses.

But by looking at the quivering of his downy grey fur you quickly get the idea that the chunk of banana he is happily feasting on has likely got something to do with his delightful jig.

Pedro has opted for the sweet morsel rather than the carrots, kale and lettuce scattered on the grass in front of him. But the bounty for this bunny, and others like him that have been abandoned in Minoru Park, is a sad commentary about his plight.

“Look at him. He’s so happy,” says Cindy Howard, a co-founder of Richmond’s Bandaids for Bunnies, a rabbit rescue group. “He’s really enjoying that. It’s meant to be just a treat. I don’t feel too bad about giving it to him because that could very well be his last meal.”

That is potentially the case for most of the bunnies Howard sees and feeds on her regular rounds of the park, which is one of a few hot spots in Richmond — the Richmond Auto Mall is another where pet rabbits are released by owners thinking they would have a better life outdoors in the wild.

Right now, the population in the park is at a few dozen. That’s somewhat on the low side, Howard says. But she knows it could spike in the weeks and months to come as Easter approaches and some animal lovers think a rabbit is a good idea for a pet, only to realize they are not properly equipped to care for it.

She said time and much consideration needs to be exercised before bringing home an adorable, floppy-eared bunny.

First off, bunnies need an area to roam instead of being restricted to a cage.

“You wouldn’t do that to a dog or a cat,” Howard says.

And they need access to proper food and veterinary care when needed.

“Rabbits are pretty fragile little creatures, especially the domesticated ones,” she says.

Rabbits also suffer from being viewed as less important than other domesticated pets such as cats and dogs.

“Rabbits are kind of like the low man on a totem pole. If there was suddenly a large number of Maltese puppies dumped and living at the park there’d be an outcry,” Howard says. “Rabbits don’t get that kind of consideration.

“They really need a PR person, someone to advocate for them.”

In some ways that is done by Howard, who has written a children’s book called The Rabbit Rescuers, a fictional tale of 10-year-old twins who form a club whose goal is to help abandoned pet rabbits at a local park.

And last summer she hosted a one-day camp at RAPS (Richmond Animal Protection Society) about the care and needs of rabbits — each child attending also went home with a copy of her book.

“Children are the best way to get that message across because they tell their parents,” she says.

Others, such as Michelle Lemoignan, a pet supply store owner in South Delta, assists a variety of small animal rescue groups across the Lower Mainland.

At one time Lemoignan says she, too, believed pet rabbits could be introduced to a wild environment and live an idyllic life. But she has now taken a different view after her experience on the front lines rescuing sick and injured bunnies.

“I used to think they could live in such a beautiful place like Minoru Park where they have lots of hedges to find shelter, can enjoy the company of other rabbits and even have people come by who’d feed them,” she says. “That’s not the case.”

Lemoignan says she estimates the life expectancy of a domestic rabbit that has been dumped in a park is around three days.

Well cared for, domestic rabbits can live up to 10 to 12 years.

She says the majority of them are simply not prepared for living in a setting without care and can fall victim to disease, suffer injuries from territorial fights with other rabbits and are easy prey for natural predators — coyotes and raptors.

Howard says it’s not uncommon to find the lifeless bodies of baby rabbits in the park, many bred from dumped pets, with a series of puncture wounds inflicted by crows or hawks.

“It’s really sad. You see lots of babies at one time, and then they’re gone. You know they haven’t survived,” she says.

But predators come in other forms, too.

Dr. Joseph Martinez, who runs Little Paws Animal Clinic in Richmond and has treated scores of rescued rabbits over the years, says he has tended to some that have suffered air rifle pellet wounds.

“People have been shooting them. It’s very sad, but that’s what has happened to some of them.”

Lemoignan says she considers Richmond to be a popular place to dump rabbits because of its central location in the Lower Mainland.

“People go out and buy a rabbit from a breeder in, say, Surrey or Vancouver. And it’s that same central location that makes it convenient for people to drive to Richmond and dump their rabbits,” Lemoignan says.

It’s also ironic since the city outlawed the sale of rabbits from pet shops back in 2010.

City of Richmond spokesperson, Ted Townsend, told the News that other measures have been enacted to help cut down on the number of rabbits being dumped locally. One is the fact that releasing rabbits in parks and open spaces is a bylaw violation and subject to fines. So is feeding rabbits in public areas.

Sorelle Saidman, who runs Rabbitats, a rabbit rescue based at the Richmond Auto Mall says the efforts of her organization has managed to keep control of the numbers there.

In the three or so years in operation, around 250 rabbits have come through its doors. She says it’s a misconception that the auto mall’s proximity to the Richmond Nature Park has accounted for the dumping over the years.

“It simply came from a few people dropping off their rabbits there and others noticed that and thought it would be a good place to get rid of their rabbits because they’d have friends there,” Saidman says.

So, what can be done to stem the tide of dumped rabbits?

Lemoignan says mandatory spaying and neutering of pet rabbits is one step in reducing the numbers.

Martinez says he believes pet owners also need to be better educated on the number of rescue organizations and shelters that can care for unwanted bunnies.

One such place is RAPS where its CEO and executive director, Eyal Lichtmann, says that his shelter currently has 80 rabbits.

Part of the reason so many bunnies are housed at the no-kill shelter is the fact they are much slower to adopt out than dogs and cats.

Lichtmann looked up the stats for average length of time is takes to adopt out a rabbit and found it takes 863 days. For a dog it averages at 112 days, and cats 63 days.

RAPS does not respond to nuisance calls involving rabbits, meaning all of the bunnies in the society’s care are those that have been dropped off at the No. 5 Road shelter by owners.

The others that are left at local parks and often soon go missing veil the true numbers of rabbits that are being dumped, Howard says.

“That makes it really hard to put a number on the overall problem,” she says as she drops a few more pieces of banana on the ground for Pedro to gladly gobble up.

As for what his future holds for him, Howard isn’t hopeful.

“He’s been around a while, lived through this winter. But it’s unlikely he’ll be around through another.”

*Rabbitats is hosting an Easter Bunny Fest on March 26 from 11 a.m. to 4 p.m. at the auto mall. Visitors can come and meet a host of rescued rabbits and enjoy a range of activities, from face painting to raffles. There will also be rabbit treats and supplies, as well as adoption information. Admission is by donation. For more information about Rabbitats, visit online at Rabbitats.org.