The efforts of volunteers, who helped preserve and promote one of Richmond’s historical icons, is earning some recognition.
Apr 4, 2017 4:20 PM By: Philip Raphael 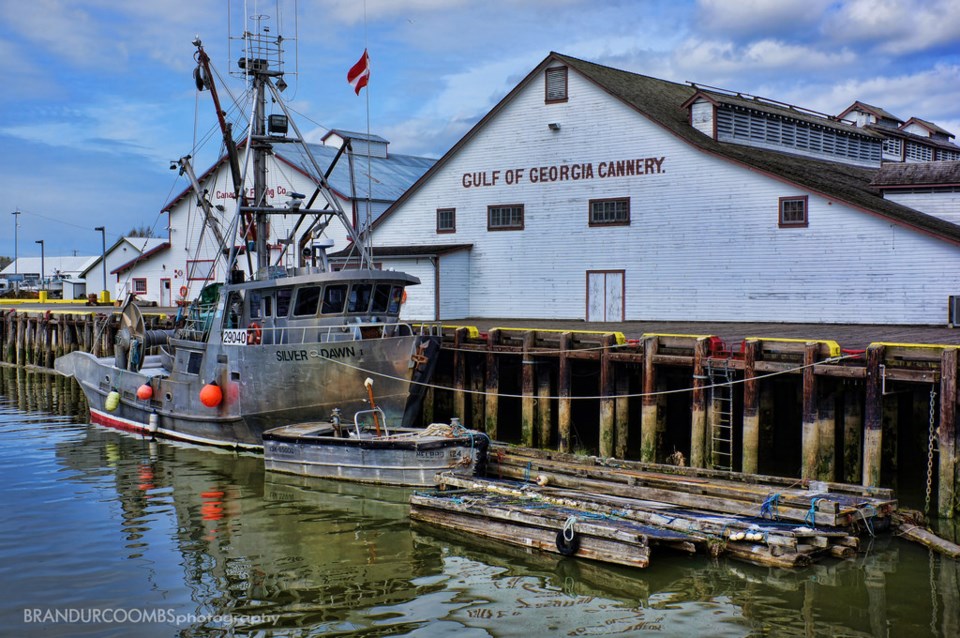 Built in 1894 and preserved as a national historic site in the early 1980s, the Gulf of Georgia Cannery in Steveston was one of the largest to operate along the waterfront. Flickr photo. Since 1986, the Gulf of Georgia Cannery Society has, along with support from Parks Canada, been responsible for the site and is today headed up by chair Dave Semple.


The efforts of volunteers, who helped preserve and promote one of Richmond’s historical icons, is earning some recognition. Last week, the Fraser River Discovery Centre in New Westminster announced it was awarding a spot in its hall of fame for the Gulf of Georgia Cannery Society.

Since 1986, the society has worked, along with Parks Canada, to help tell the story of the local fishing industry through the massive building that was built at the southern end of Steveston’s Third Avenue in 1894. It earned the title as the “monster cannery” for its size among the dozen or more dotted along the waterfront that was referred to as “cannery row.”

“I got hooked on this thing because by dad was one of the founding members,” said Dave Semple, who is the society’s chair and also general manager of community services with the City of Richmond. “And it was preserved to ensure the whole story about the local history of fishing was told.”

Semple said the site is an incredible resource and the community should be proud and fortunate to have retained it.

“In Steveston, you’ve got the cannery and Garry Point at one end, the Steveston Post Office and Museum, the (Interurban) Tram and Britannia (Heritage Shipyard). You look at all of these legacies of what the past was about and it’s pretty cool,” Semple said. “But what makes the gulf (cannery) special is the volunteers who have made it what it is.”

At the moment, the society has a good blend of talented young members and elders who are helping keep the stories alive and relevant.

“The cannery has become a very important link because you’ve got to learn from the past to create the future,” Semple said. “And the future is the wild fish as a sustainable food product. That’s the key to what our society is about.”

One of the upcoming projects the society is working on to illustrate the demands of the local fishing industry is a video of what it’s like to be on board a gillnetter.

“We’re going to have a camera onboard one of the boats when the season starts and show what it’s like to set a net and what happens when you start to bring in the salmon,” Semple said. “It’s a pretty amazing sight.

“But overall, the cannery is an incredible resource. And we’re also incredibly fortunate to have had the support of Parks Canada over the years,” he added. “And you can see that in the way the building has been maintained and their efforts have helped make us a year-round facility.”

Another person who is pleased with the recognition for the society it its executive director, Rebecca Clarke.

“Our society has worked for the past 30 years to preserve the stories of west coast fishing,” she said in an email to the News. “Being located at the mouth of the Fraser, we are particularly interested in the wellbeing of the Fraser and have been outspoken advocates for protecting the river.

“Part of our mission is to help the public understand the impacts that modern life and commercial fishing have on fish ecology. We believe strongly that keeping B.C.’s river systems healthy, keeps our vital fish resources strong. It is an honour to have our work recognized by a respected organization such as the Discovery Centre.”

“The Gulf of Cannery Society is a living link to the amazing and important history of fishing on the Fraser River,” said Kathleen Higgins, chair of the Fraser River Discovery Centre Society in a press release. “As such, it is a worthy inductee into our Fraser River Hall of Fame.”

The hall of fame gala dinner and induction will take place June 7 at the Gulf of Georgia Cannery National Historic Site.