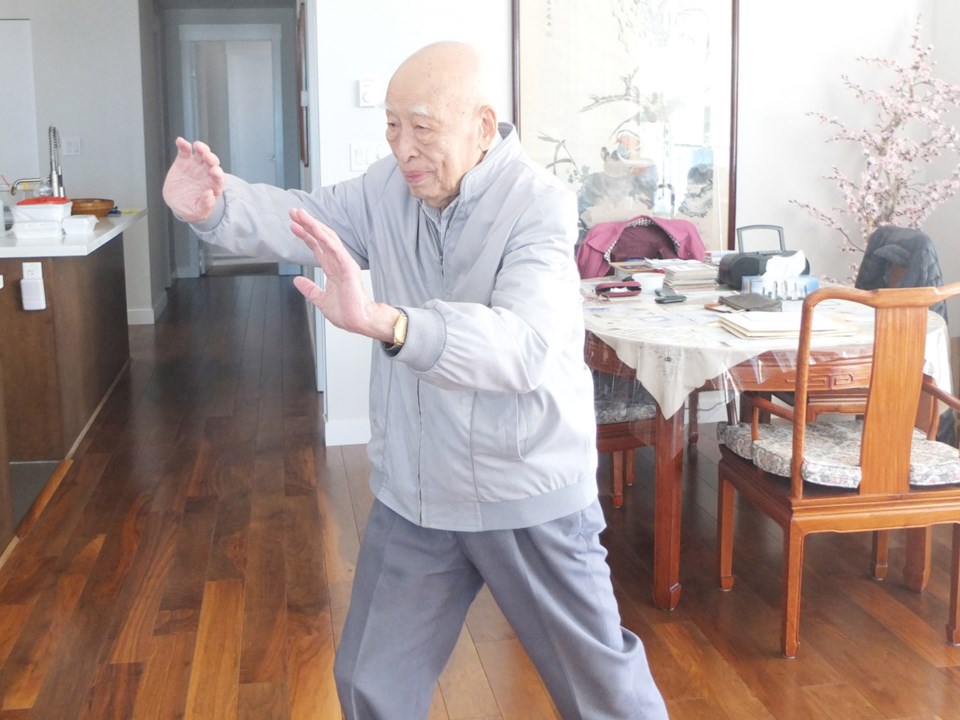 Wei-foung Yuan is 98 and gets up at 7 a.m. every day to teach tai chi to hundreds of active seniors. Photo by Daisy Xiong/Richmond News

Wei-foung Yuan gets up every day at 7 a.m.

As the founder of the Richmond Wellness Club, Yuan then heads off to Richmond Centre to teach hundreds of people how to do exercise from 8 a.m. to 9:30 a.m.

He’s done the same thing every morning for the last 25 years and has helped thousands of people over almost three decades become healthier through exercise.

Yuan is a 98-year-old Richmond senior.

His shopping mall group, which on any given day can number between 100 and 200, finish its routine before the mall opens.

After that, he and some members get a cup of tea or coffee at the food court in the mall and chat before heading back home.

The Richmond News met with Yuan at his apartment, on Saba Road in the shadow of the mall, after the morning routine.

“Exercise makes you happy, and happiness is the key to a healthy and long life,” Yuan said.

“Seniors need to go out to communicate with people, make friends and do activities.”

When Yuan first came to Canada, he had no idea that one day he would create a community for hundreds of seniors, allowing them to make friends and have a healthier lifestyle.

Before coming to Canada, Yuan lived in Hong Kong and Shanghai. Born in Haimen City, he worked in Shanghai until he was 30, and lived through the Sino-Japanese war.

“Our factory was bombed by the Japanese, and I could see bodies on the street,” Yuan recalled.

“We hid at the English settlement and I could see fires from the war by the river from the top floor.”

Afraid of civil war, Yuan’s boss relocated the factory from Shanghai to Hong Kong in 1948.

He then moved with his boss and worked there until 1981, before coming to Canada and Richmond with his son.

By that time, the Hong Kong manufacturing industry was fading and Yuan’s factory was sold to a real estate developer.

“I didn’t know what to do after I came here, so I went to a park to practise tai chi,” said Yuan.

“I learned tai chi from a master when I was working in Hong Kong.

“Then someone saw me practising and recommended me to teach tai chi in a community centre. Then I became a tai chi teacher and gave two classes every week.”

“After I came back, some friends asked me to teach them the exercises,” said Yuan.

“So I started free classes on open grounds every day in the morning. The class grew from just over 10 people to over 50.”

In 1992, Yuan and his students gave a performance at Richmond Centre and, from then on, were invited to do exercises in the centre.

Now the club has more than 500 members and is going to celebrate its 25th anniversary in September.

Yuan has handwritten a textbook on tai chi and LTK to accompany illustrations.

At the end of the book, there is an “exercise song” composed by him.

“Happiness and exercises live together...” Yuan sang for The News.

He said that the key for a healthy life is to stay relaxed, keep happy and be active.

“There are three ways to find happiness; finding it yourself, by helping others and by doing good things to society.”