One of the longest running and most colourful traditions of the Steveston Salmon Festival parade is the one that actually gets the event rolling each year. It’s the annual Kid’s Bike Parade, which gets underway at 9:30 a.m.
Jun 27, 2017 5:45 PM By: Philip Raphael 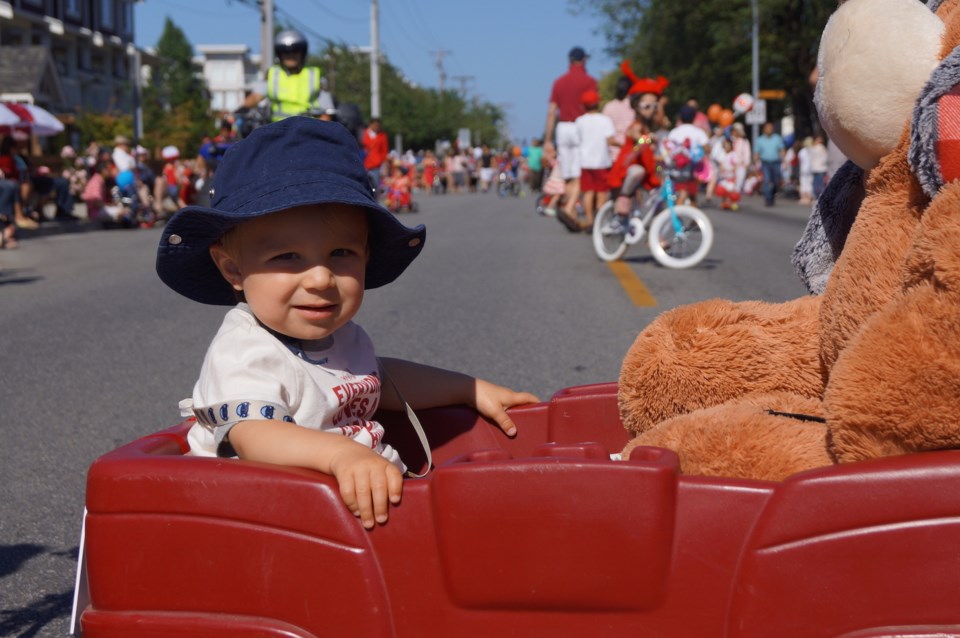 One of the longest running and most colourful traditions of the Steveston Salmon Festival parade is the one that actually gets the event rolling each year.

The event is organized by the G&F Financial Group and the financial institution’s association goes back to the late 1970s when it had a branch in Steveston that forged deep connections with its members and surrounding community.

“Our organization has been involved in supporting the Steveston Salmon Festival for more than 10 years and we always look forward to participating in such a fun and important community event,” said Stephanie Butler, a communications specialist with G&F Financial Group.

Each May, G&F employees start planning the logistics for the event. And on July 1, they are out on the route bright and early.

“We’ve partnered with the (Gulf of Georgia) Cannery to use their parking lot as our staging grounds for the kid’s bike parade,” Butler said. “We set up our tents and then the kids begin to arrive around 8:30 a.m. From that point, until the bike parade begins, our employees are kept busy handing out snacks, water and bike decorations.’

They also hand out participation ribbons and Canada Day pins from the Salmon Festival organizers to the kids before they leave for the parade route.

“After the kids depart on their bikes, our employees dismantle the tents and make their way over to the main parade grounds,” Butler said. “Every year, we enter our G&F van in the parade and hand out items all along the route – this year, we’re giving out temporary tattoos.”

The opportunity to be involved with the festival is heartfelt, Butler added.

“As an organization, we are truly passionate about giving back to our local neighbourhoods,” she said. “We show our support in many ways – through donations, educational bursaries and also through our involvement in community events, such as the Salmon Festival in Steveston.

“As a credit union, we are driven to support our members and the neighbourhoods that they call home.  We have always had strong ties to the Steveston and Richmond communities and we treasure our involvement in this festival.”

Jesse Nakatsuru, a G&F employee who has been involved in the Salmon Festival since G&F started participating said: “I love volunteering for the Steveston Salmon Festival with G&F. I grew up and still live in Steveston, so I have fond memories of seeing the parade as a child and I love how the event has grown and evolved over time, but still remains so integral and relevant to the Steveston community.”

Youngsters wanting to be part of the parade do not need register ahead of time. But they should bring their decorated bikes, trikes and wagons to the Gulf of Georgia Cannery parking lot at the corner of Chatham and 4th Avenue beginning at 8:30 a.m. and no later than 9:15 a.m.

All children must be accompanied by a parent or adult guardian — no exceptions. Helmets are mandatory for all riders and skaters.

Departure time for the parade route is 9:30 a.m. The parade travels down 3rd Avenue then East on Moncton Street to the Community Police Station.