Dogs can bring companionship to isolated seniors, but whether they should be depended on as a solution to loneliness was questioned at Thursday’s all-candidates meeting focusing on seniors, hosted by CARP, formerly the Canadian Association of Retired
Oct 5, 2019 6:00 PM By: Maria Rantanen 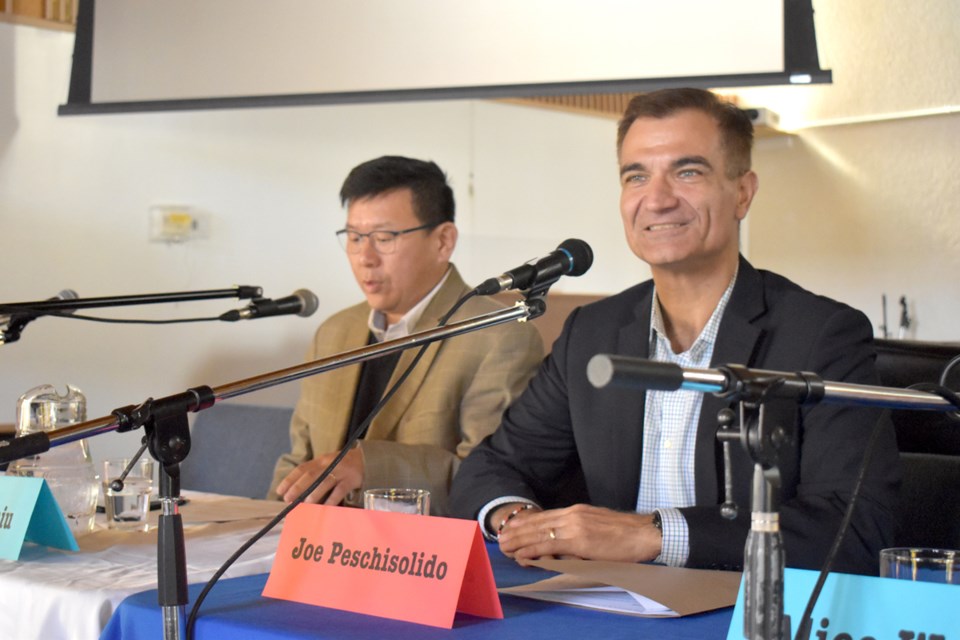 Kenny Chiu (Conservative) and Joe Peschisolido (Liberal) were part of a panel of candidates at South Arm United Church on Thursday.Maria Rantanen

Dogs can bring companionship to isolated seniors, but whether they should be depended on as a solution to loneliness was questioned at Thursday’s all-candidates meeting focusing on seniors, hosted by CARP, formerly the Canadian Association of Retired Persons.

Conservative candidate for Steveston-Richmond East, Kenny Chiu, said having a dog or volunteering with dog societies can help seniors feel less isolated, to which Liberal candidate Joe Peschisolido responded that this election is not “about pets.”

“I think this issue (of seniors’ isolation) needs more than government to solve,” Chiu said.

Chiu said his mother lives with him part of the year and their family makes it a priority to sit around the dinner table with his two daughters, to discuss what is going on in their lives. Part of the family unit is their dog Nugget, loved by his elderly mother.

“I think these are the organic ways that we need to grow our society,” Chiu said, adding that organizations like the Regional Animal Protection Society (RAPS) can help low-income seniors take care of their pets with their low-cost veterinary care.

Peschisolido said, while dogs and family are important and people are “blessed” if they have a support system, “the role of government is to be there to help if you don’t have that.”

According to Statistics Canada, 1.4 million Canadian seniors report feeling lonely, and the physical impact of loneliness is equivalent to smoking 28 cigarettes per day and can increase the risk of dementia and cognitive decline.

Green candidate Francoise Raunet said a social safety net is needed to help seniors and the knots (the services) are what hold the net together. She added that public institutions like community centres should be well-funded to combat isolation, as well as public transportation to ensure seniors are able to get out and stay connected to their community.

She also advocated a radical shift in society’s economic model.

“Now we are completely focused on growth and consumption (…) we need to actually shift to thinking about well-being and making that one of the central measures of our economic success,” Raunet said.

Wong said having support for seniors is important, and she pointed out the Conservative government under Stephen Harper increased funding for programs like New Horizons and supported CARP. But she added seniors should be encouraged to volunteer whereby those who are still capable can help those who need more.

Zhang Zhe, independent candidate for Richmond Centre, said English is a barrier for interaction for many seniors of Chinese origin.

The forum, at the South Arm United Church in Steveston, focused on several other topics, prepared by CARP, including safeguarding pensions, universal pharmacare, long-term care, federal funding for health care and seniors housing.

Raunet said the Green party would implement a guaranteed livable income for everyone which would guarantee no one would fall below the poverty line.

Alice Wong, running for re-election in Richmond Centre with the Conservatives, criticized the amount of red tape involved in building homes and the stress test imposed by the Liberals for those seeking a mortgage, saying it would impede people from buying a house.

Candidates were also questioned on how they would deal with elder abuse.

Chiu pointed out that, because seniors are isolated, they fall prey to scams – phone scams in particular.

“This is something the current government has dropped the ball on,” Chiu said.